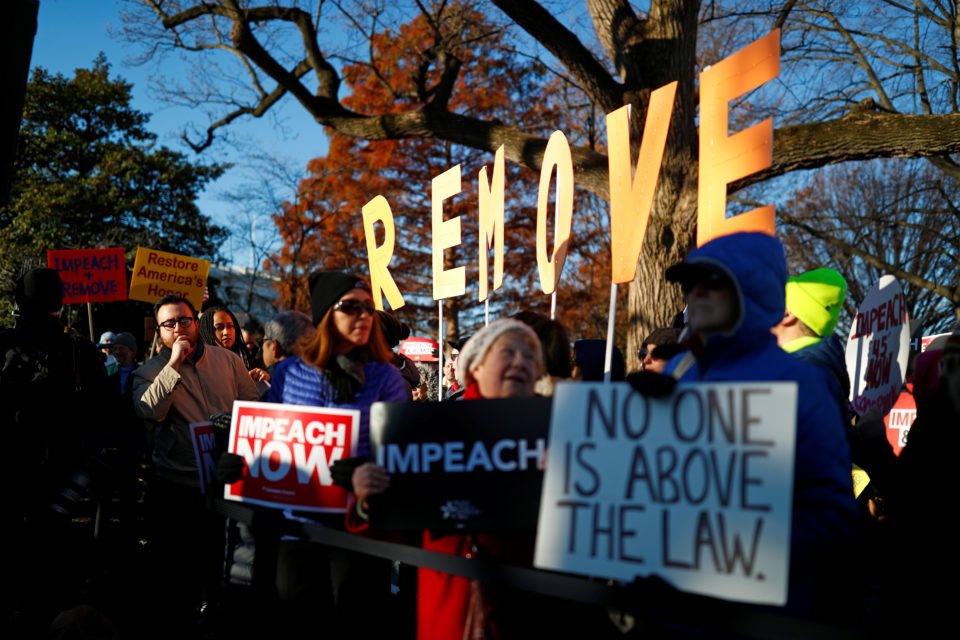 The House of Representatives began debate on Wednesday in what one lawmaker called a “democracy-defining moment” ahead of historic votes on two charges against President Donald Trump accusing him of abusing his power and obstructing Congress that would make him only the third US president to be impeached.

The votes in the Democratic-controlled House are expected to fall almost entirely along party lines, underscoring the deep divide in Congress over the Republican president’s conduct and the larger political schism within the United States.

Impeachment is an extraordinary check on presidential power spelled out in the US Constitution enabling Congress to remove presidents who commit “high crimes and misdemeanors.”

The vote, expected in the early evening, would set the stage for a trial expected next month in the US Senate on whether to convict Trump and remove him from office. While the House twice previously has voted to impeach presidents – Bill Clinton in 1998 and Andrew Johnson in 1868 – no president has ever been removed from office via impeachment.

The Senate is controlled by Trump’s fellow Republicans, who have shown little interest in ousting him. During the trial, House members would act as prosecutors as the senators as jurors.

House Democrats accuse Trump of abusing his power by asking Ukraine to investigate Joe Biden, a former US vice president and a leading contender for the Democratic nomination to face Trump in the November 2020 election. Trump is also accused of obstructing the House investigation by directing administration officials and agencies not to comply with subpoenas for testimony and documents related to impeachment.

Republicans signaled as soon as the session began that they intend to do everything possible to stall the proceedings, calling for the House to adjourn immediately after the morning prayer and pledge of allegiance, then presenting a motion accusing senior Democrats of violating House rules. Republicans lost votes on both issues on the House floor.

But the Republican maneuvers meant that the debate on the rule for the impeachment resolutions to be voted upon later in the day began about an hour later than scheduled.

“This is a democracy-defining moment. History will judge us by whether we keep intact that fragile republic handed down to us by our forebears over 200 years ago – or whether we allow it to be changed forever,” Democratic Representative Jim McGovern, chairman of the House Rules Committee, said on the House floor.

Representative Tom Cole, that committee’s top Republican, countered, “Today after a truncated investigation that denied the president due process, cherry-picked evidence and witness testimony to fit their narrative, and trampled on Republicans’ minority rights, Democrats in the House are pressing forward with a partisan impeachment vote.”

Denying wrongdoing, Trump, 73, has called the impeachment process “a total sham,” and on Tuesday sent House Speaker Nancy Pelosi a letter in which he accused her of engaging in a “perversion of justice” and an “attempted coup.” The businessman-turned-politician argued that Democrats are trying to undo the results of the 2016 election in which he defeated Democrat Hillary Clinton.

“Can you believe that I will be impeached today by the Radical Left, Do Nothing Democrats, AND I DID NOTHING WRONG! A terrible thing,” Trump wrote on Twitter on Wednesday morning. “Say a prayer!” He later added a Twitter post attacking Pelosi, writing, “Will go down in history as worst Speaker.”

On the House floor, Republican Representative and Trump ally Debbie Lesko said, “This is a sad day. I believe that the Democrats are tearing the country apart.”

Democratic Representative Donna Shalala, a former member of President Clinton’s Cabinet, said, “This is not a matter of politics. This is a matter of protecting the integrity of our democracy for the next generation.”

With Trump seeking a second four-year term next year, impeachment has cleaved the public, with most Democratic voters supporting it and most Republicans opposed.

Fearful of political blowback, Democrats were long resistant to an impeachment inquiry, even after Special Counsel Robert Mueller outlined episodes of Trump seeking to impede the federal investigation that documented Russian interference in the 2016 election to boost his candidacy.

But after a whistleblower from the US intelligence community brought to light a July 25 phone call in which Trump asked Ukrainian President Volodymyr Zelenskiy to investigate Biden, House Democrats launched an impeachment inquiry in September and moved swiftly to take testimony from current and former administration officials.

Democrats said Trump held back $391m in security aid intended to combat Russia-backed separatists and a coveted White House meeting for Ukrainian President Volodymyr Zelenskiy as leverage to coerce Kiev into interfering in the 2020 election by smearing Biden.

On the July telephone call, Trump asked Zelenskiy to investigate Biden and his son Hunter Biden as well as a discredited theory promoted by the president and beneficial to Russia that Democrats conspired with Ukraine to meddle in the 2016 election. Hunter Biden had joined the board of Ukrainian energy company Burisma while his father was US vice president. Trump has accused the Bidens of corruption without offering evidence. They have denied wrongdoing.

The Senate has yet to set its procedures for a trial on the charges, which would be overseen by US Chief Justice John Roberts. Removing Trump from office would require a two-thirds majority of those present and voting in the 100-member Senate, meaning at least 20 Republicans would have to vote to convict the president.