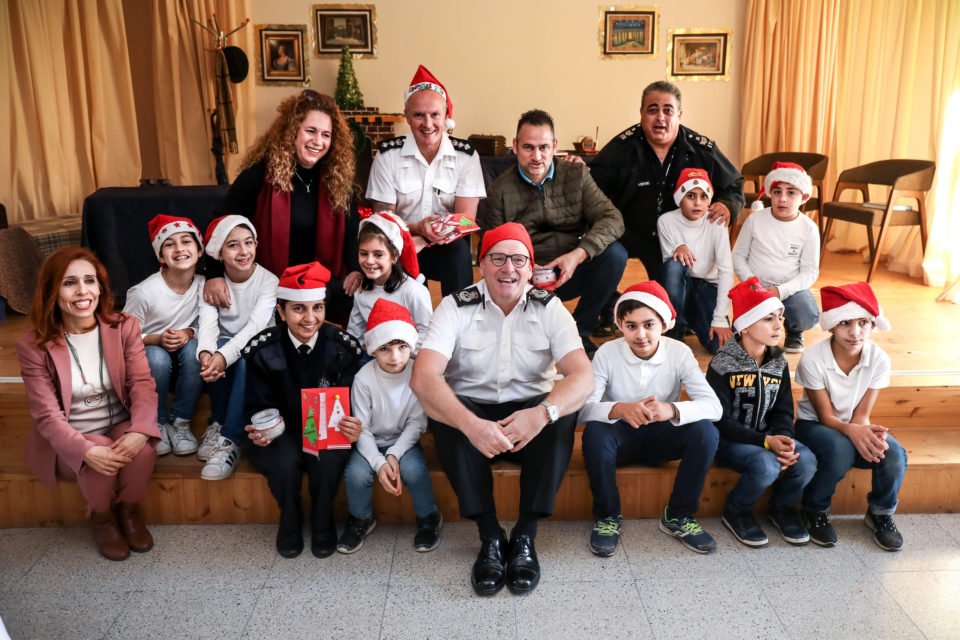 The Sovereign Base Area Police have been delivering some Christmas cheer in the build-up to the holiday period this week after visiting two local schools for special needs children in Kolossi to present them with clothes and shoes purchased with money raised from the recent Chief’s Charity Cycle.

The Cycle Challenge, which took place in both the Eastern and Western SBAs over two consecutive weekends in November, raised an astonishing €22,000 for various causes and this week’s school visit was the first example of those fund-raising efforts coming to fruition.

Speaking shortly after finishing the cycle challenge, Chief Constable Chris Eyre praised the efforts of all those involved and revealed how he hoped the money could make a difference to some children’s lives.

He said: “To see that amount of money raised by our officers at both ends of the island and with support from local communities and businesses was a humbling experience.

“The welcome shown to us as we entered each and every village was heart-warming and the kindness shown to us was something very special indeed and it was really quite inspirational.

“To raise the amount of money we did was an amazing result that will make a real difference to the children and their families.”

SBA Police Chief of Staff, Chief Inspector Maria Atalioti, who was alongside other officials during the school visits this week, said it was a wonderful experience to see the children so excited by the gifts given to them.

She said: “It was a really wonderful event and to be able to use the money to give the children what they needed was great to see.”
Prior to the visits, police officers liaised with school teachers to see what would be of most benefit and Chief Inspector Atalioti explained the decision was put in the hands of the children.

“The teachers told us letting the children choose what gifts they wanted was the best thing, so they took them to a shop and they were able to choose clothes and shoes, which they really enjoyed,” she explained.
“When we visited them this week, we officially handed over those gifts and they were very excited to receive them.”

Kolossi-A elementary school headmistress, Maria Kleanthous said: “The children were very excited to be visited by the SBA Police and were very grateful for the presents so close to Christmas. We would like to thank the SBA Police for their support and we hope to continue with that relationship in the coming years.”

On Wednesday night, the SBA Police held another event in the Ypsonas Municipality Hall which was attended by the First Lady of the Republic of Cyprus, Andri Anastasiades, to present money raised from the charity cycle and last summer’s concert held in Curium which raised €33,500.

The police chief of staff continued: “This was another opportunity for us as a police force to get the communities together and present them with the money we have raised to help various projects which will improve the lives of those living in and around the SBAs.

“We also invited the four families of the seriously sick children that we have raised money for from the charity cycle in order to present them with the money we collected. Some of the children are already abroad having treatment so it is so important to get them this money as soon as possible to help them pay for the treatment they need.”

And in speaking of the support once again shown by the First Lady, Chief Inspector Atalioti said: “It is always a great honour to have the First Lady attend our events and she has always shown a lot of support to us in the past and that means a great deal to us as a police force.”