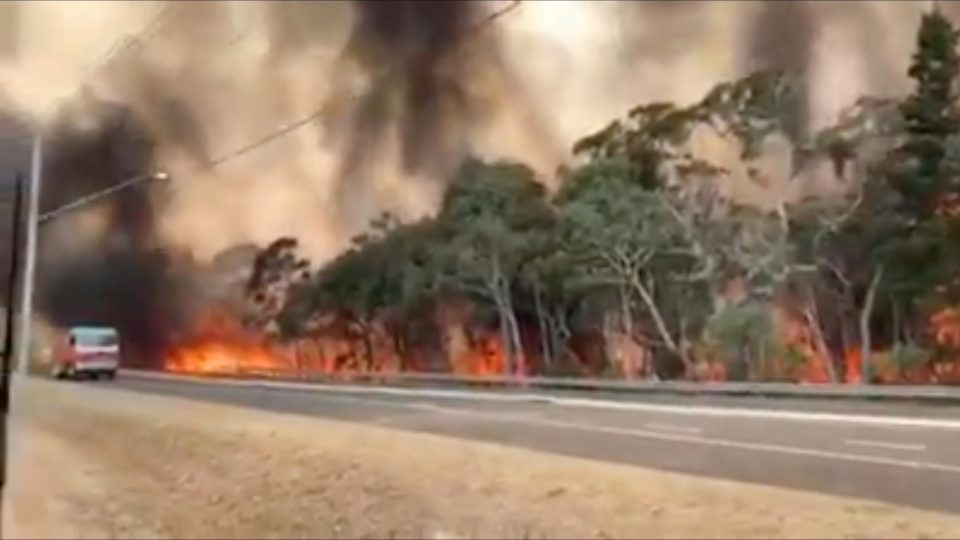 Flames engulf a row of trees at the side of a road on Gospers Mountain in New South Wales, Australia, December 21, 2019, in this still image taken from social media video. NSW Rural Fire Service/via REUTERS THIS IMAGE HAS BEEN SUPPLIED BY A THIRD PARTY. MANDATORY CREDIT. NO RESALES. NO ARCHIVES.

Catastrophic conditions fueled massive bushfires across Australia’s New South Wales state on Saturday, with three blazes around Sydney burning at emergency level, while in South Australia one person was found dead in a fire zone.

Some major roads outside Sydney were closed and authorities asked people to delay travel, at the start of what is normally a busy Christmas holiday period, warning of the unpredictability of the fires as winds of up to 70 kph (44 mph) were set to fan the flames as temperatures soared above 40C (104F).

“They are the very worst of conditions,” said NSW Rural Fire Services Commissioner Shane Fitzsimmons. “Given we have a landscape with so much active fire burning, you have a recipe for very serious concern and a very dangerous day.”

Close to 100 fires were burning across NSW on Saturday afternoon – of which six were characterised as emergency level.

Just days out from Christmas, local police warned people to avoid travelling throughout the day as roads would likely close and temperatures would soar.

“Today is not the day to start your holiday,” a NSW police spokeswomen said.

Close to 10,000 emergency personnel would be working across NSW on Saturday. The state’s Minister for Police and Emergency Services David Elliott said it was probably the largest emergency deployment ever seen in NSW.

A southerly wind change is expected late on Saturday afternoon. It is forecast to bring winds of up to 90 kph (56 mph), which Fitzsimmons said would initially worsen fire conditions before leading to a dramatic drop in temperatures.

The death of two firefighters on Thursday night when their fire truck was struck by a falling tree as it travelled through the front line of a fire brought the wildfires death toll in New South Wales to eight since the start of October.

Shortly after the two deaths were announced, Prime Minister Scott Morrison issued a statement saying he would return as soon as possible from a family holiday in Hawaii, a trip that had drawn sharp criticism as the wildfires crisis deepened.

In South Australia, authorities said one person had been found dead, another was critically injured and 15 homes had been destroyed by a fire in the Adelaide Hills, just 40 kilometres (25 miles) east of the state capital of Adelaide.

The death followed another fatality in South Australia on Friday, the result of a car crash which sparked a fire.

Authorities said fires had burnt through some 40,000 hectares in the state and 23 firefighters suffered injuries on Friday.

In Victoria, authorities said 142 fires had started in the state since Friday, with two burning at an emergency level on Saturday afternoon.

Australia has been fighting wildfires for weeks, with blazes destroying more than 700 homes and nearly 3 million acres (1.2 million hectares) of bushland.

Report into police culpability in serial killer case handed over