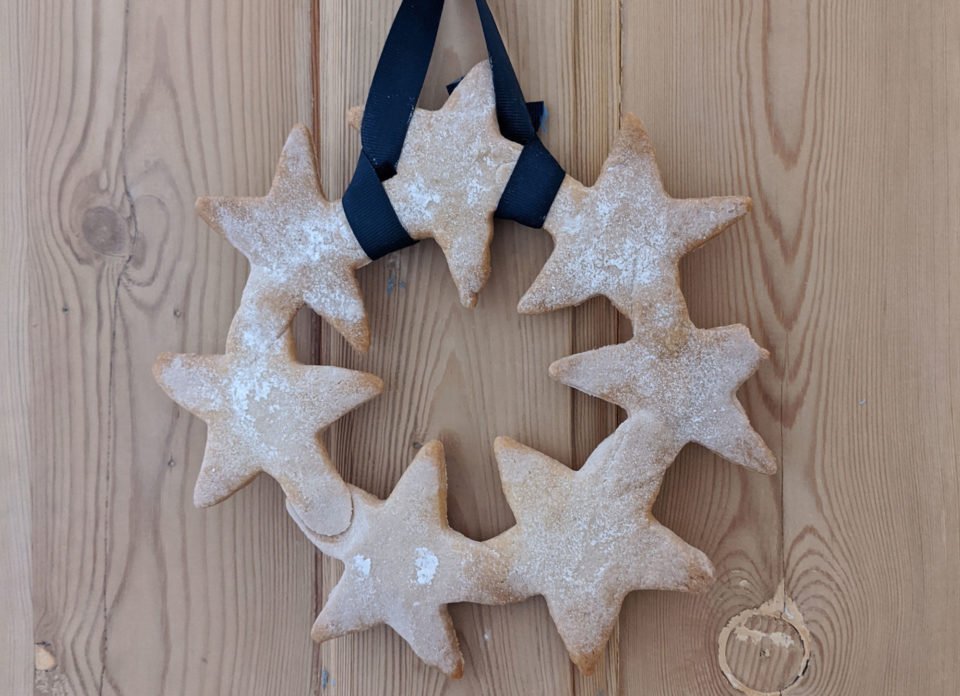 There’s something about Christmas that can leave you craving a spot of baking. Clouds of icing sugar and flour, star cutters and caramel, trays and trays of mince pies – it’s practically inevitable. So, feeling in the festive mood, we set three writers the yuletide challenge to recreate three recipes from Australian food writer Donna Hay’s latest cookbook, Christmas Feasts And Treats.

Attempting to make anything look as good a Donna Hay recipe book is always going to be a challenge. So, when I tried to create her vanilla star wreath, I knew it wouldn’t be easy, especially when I decided to let the kids help. My daughters – Rosie, 10, and seven-year-old Poppy – were very excited about their wreath-making project, eager to hang it on their door ready for Christmas Day.

I made the biscuit dough, which is wonderfully easy, and popped it in the fridge to firm up, ready for our after-school baking shenanigans. Then it was over to them to cut out stars, re-rolling the dough until we had seven for each wreath. It’s at this point you overlap them in a circle to create the wreath shape and then bake (at a low temperature) in the oven.

All things considered, the rounds of stars worked pretty well, but we found the wreath held its form better if you really push the overlapping corners into each other – light pressing probably won’t cut it, but that might be due to the dough being somewhat overworked by small fingers.

The other trick is to leave the wreath to cool completely before touching it. Poppy wanted to pick it up and sniff it the second she saw it. Alas… every star broke and we were left with a stack of biscuits (thank goodness the recipe makes four).

Once it’s cooled, it’s just a case of sprinkling with icing sugar and attaching a ribbon. The girls wanted to hang theirs on their bedroom doors, so we had to shake off a fair bit of the icing sugar to avoid dustings on the carpet every time they opened them, but they look super-cute. Strangely, Poppy’s seems to have lost all of the star corners. She tells me the resident Christmas elf must have nibbled them off, but I’m not so sure…

I’m a cake baker – sugar work and whipping up confectionery is not really me, mainly because it sounds like a guaranteed route to third-degree burns and lost teeth. However, I do have a mild obsession with salted peanuts so combining them with caramel – and solving a few Christmas presents in the process – seemed more than worth a go.

Hay’s one-pan recipe is a doddle to follow (you just chuck everything together and stick it on the hob), but as it all melts, you do end up with risotto-level repetitive strain injury during the required 20-25 minutes of stirring. Also, these caramels are absolutely not suitable for making with children – I kept accidentally splattering myself with the molten mixture of sugar, cream, syrup and butter. It tastes great, but is hot, hot, hot.

The sugary concoction bubbles from the yellow of road markings, to lemon curd, to a dusky bronze – and then comes the easiest bit of all, tipping the lot into a tray and sprinkling with peanuts to cool for a few hours. The whole kitchen smells gloriously of salted caramel popcorn; it clings to my hair.

Hours later (why must we wait so long Donna?!) the resulting caramels are still quite gooey and I can’t cut the slab into chunks, even after a stint in the fridge (did I not stir it long enough? Hay doesn’t specify a consistency to look for), so I shift them to the freezer.

Still, despite their formlessness, they taste smooth and milky, and the peanuts provide crunch and saltiness. Individual bites isn’t all that possible – however, a spoonful of the mix works great on ice cream.

As an Australian with a keen cook for a mother, I grew up on a steady diet of Donna Hay. I’ve made a fair amount of her recipes in the past, but I tend to stick with simple slices and cakes; nothing you have to fuss over decoration-wise.

Unfortunately, this meant I was woefully unprepared when tackling the gingerbread recipe, not owning star-shaped cutters or a proper piping set. Luckily, I managed to borrow a star cutter from a colleague, but only in one size – unlike Hay, who had lots of different sized stars.

Powering on, I first tackled the dough, which was simple to make. I then enlisted the help of my sisters and mulled wine to make an event of it, which was handy when it came to pressing out the stars – there really is a lot of dough.

So far, so good… until we got to the baking. Hay says to cook ‘until golden and dry to the touch’. Unfortunately, my gingerbread didn’t change colour at all and still felt tacky to touch. I left them in the oven a little longer, and this turned out to be a fatal mistake – one batch (which was thicker) turned out dry and chewy, and the thinner biscuits were way too hard and crunchy. Even when I pulled them out they still didn’t look golden, and I wasn’t 100 per cent sure they were done. Unfortunately, they were way over-baked.

Decorating was a disaster too. I improvised a sandwich bag with the corner cut off to do the icing, but this was messy and imprecise. Out of sheer frustration (or laziness), we eventually ended up threading five with ribbons and tying them on the tree, which was really quite fiddly to do.

Sorry, Donna, it’s far too much faff to do all 25 – especially when there’s mulled wine to be drunk.

Arsenal appointment of Arteta out of my control, says Guardiola

Nord Stream 2 to press on with Europe gas pipe, despite U.S. sanctions