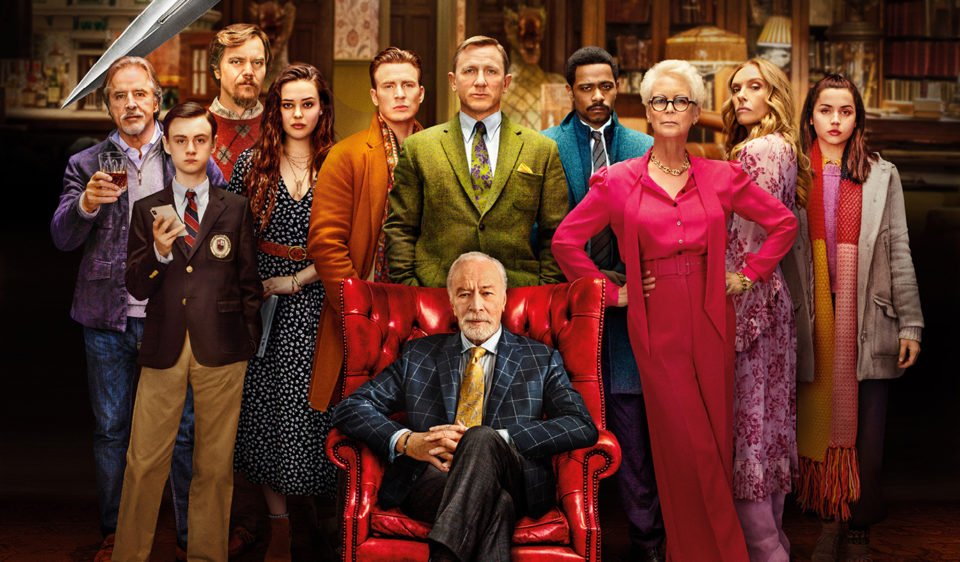 I decided to go the extra mile, and watched Knives Out twice before this review. It wasn’t hard – I actually liked it even more the second time – and besides it seems right, when talking about a whodunit (albeit a light-hearted one), to check if it still works when you know the solution. The answer, in the case of this delightful caper, is that it does, partly because it’s so much more than a whodunit. There are many witty touches (both visual and verbal), a sharp but unobtrusive political message, and even – especially on second viewing – a solid emotional core. One moment, when Marta (Ana de Armas) is commended by detective Benoit Blanc (Daniel Craig) for being a “good nurse”, literally had me fighting back tears.

In fact, the one slight flaw in this beautiful tapestry is that Knives Out isn’t really all that strong as a whodunit, in the Agatha Christie sense. This is no Murder on the Orient Express, with its blindsiding final twist – more like Murder She Wrote (a clip from which duly appears), the affable 80s mystery show whose actual mysteries were often rather basic. The first act offers up a host of suspects, notably the three children of millionaire author Harlan Thrombey (Christopher Plummer) – discovered dead in an apparent suicide – all three of whom, it transpires, had a motive to murder the old man. Alas, having established their greed and mendacity, the rest of the film largely ignores them, going in a different direction. Unlike the classic whodunit, where the audience – like the sleuth – tries to solve a puzzle, Knives Out reveals what happened about halfway through, leaving us to identify with Marta as she deals with the consequences.

Is that really what happened, though? My lips are sealed – and writer-director Rian Johnson (whose films include Brick, Looper and Star Wars: The Last Jedi) has a few surprises up his sleeve, even in the second half – but good-hearted Marta does seem quite a reliable narrator. She’s no liar, indeed she abhors lying, indeed she has a violent, physical reaction to lying: telling a fib, however small or convenient, literally makes her throw up! You could say she’s the anti-Trump, given the US president’s loose relationship with the truth – a link I won’t belabour (the film doesn’t either), but it’s definitely there. Trump is mentioned, albeit not by name. Harlan’s grandchildren are split, like America, into “Nazis” and “snowflakes”. Above all, Marta – who was Harlan’s caregiver – is an immigrant, treated badly by the filthy-rich, conservative family who don’t invite her to the funeral and can’t even remember which country she’s from.

Johnson is so smart here, political without being shrill or dumbed-down (compare last week’s heavy-handed Black Christmas). This is such a smart movie in general, offering hope that Hollywood studios might someday go back to making real films, instead of reboots and franchises aimed at kids. The construction – even if it’s not a great whodunit – is gloriously intricate, rich in set-ups and payoffs, little seeds casually sown so they can be reaped when it counts. I’ll avoid spoilers, but just know that nothing is casual here; if one person mentions a “secret language”, or another speaks of her cousin who works in such-and-such a place… well, it’s all by design. No surprise that Johnson’s clearest influence seems to be a play: Anthony Shaffer’s devilishly clever Sleuth, the opening montage of Knives Out (that sailor doll!) being a clear nod to the 1972 film version starring Michael Caine and Laurence Olivier.

Smart, political, intricate – but funny too. The dialogue is witty, even when it doesn’t have to be (someone compares the reading of a will to “a community-theatre production of a tax return”). The actors mostly sparkle, though Craig as the Poirot-like detective, “the last of the gentleman sleuths” – Belgian accent replaced by a Southern-fried drawl – may be too cartoonish for some tastes. The pace is supple, as when Blanc interviews all three heirs separately and we flit from one to another. The 130 minutes fly by.

“The game is afoot,” says our hero – and this is indeed a game (Cluedo gets mentioned, inevitably), a playful movie and a wildly enjoyable one. The film is an outlier nonetheless, in fact I have no idea if an audience for such a movie exists at the multiplex (as opposed to at home, watching Netflix), even with the presence of Chris ‘Captain America’ Evans. There’s a joke about Gravity’s Rainbow (!), a car chase aptly described as “the dumbest car chase of all time” – plus a moment when we realise that Marta’s back is turned because she’s silently weeping, and I felt an unexpected pang in my heart again. Knives Out is the most delicious Hollywood offering in ages. Watch this film; in fact, watch it twice.