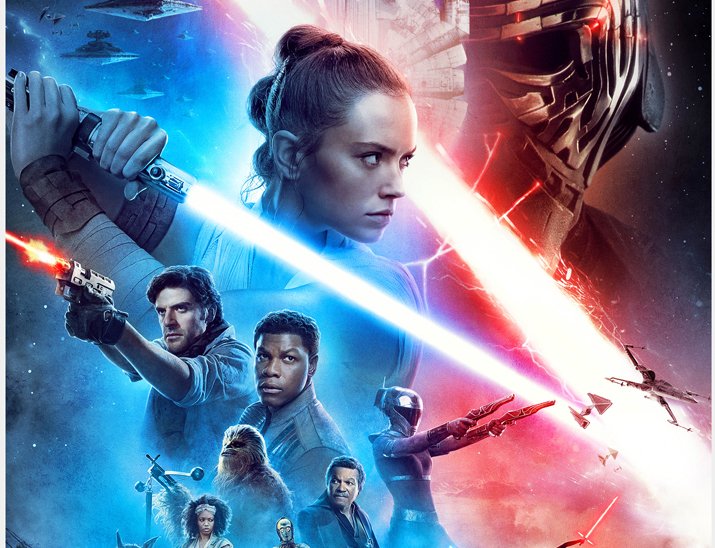 Princess Leia (Carrie Fisher) doesn’t mince words. “Don’t tell me what things look like,” she demands of her people; “Tell me what they are”. Well okay, if you want to go there. ‘What they are’ is that Carrie Fisher never actually played that scene, because Carrie Fisher passed away in 2016 (what we’re seeing is unused footage from previous instalments, Photoshopped into this one) – and ‘what they are’, by extension, is that Star Wars draws its power from an ur-text so old, its original players are now starting to die off. Some will say that only makes it more powerful, others may find something stale and regressive in the whole enterprise. ‘What things look like’ is that Princess Leia gets the send-off she deserves in Star Wars: The Rise of Skywalker; ‘what they are’ is that Princess Leia is long gone, and the saga is just using all the legerdemain of a $200 million budget to disguise that fact.

Does it matter? Not in itself, perhaps, but it’s symptomatic of the whole Star Wars mindset of being stuck in the past – endlessly repeating the same few motifs, down to ‘I am your father!’-type twists – even as the world moves on. Can we really get excited about a straightforward actioner (which is what Rise of Skywalker is, even more than its predecessors) just because it harks back to something we may – or may not – have loved in childhood? At least Marvel has the nous to keep changing.

Am I a Star Wars fan? I’d have to say no – though only because being a fan now implies having a passionate, almost hysterical fealty to the series. I’m not impervious to these films; they’ve been part of my life (albeit a small part) since 1977. I was moved by the very end of The Rise of Skywalker (literally the end, i.e. the last 30 seconds) – and I won’t spoil why, but the point is that I am open to being moved by all things Star Wars; I just think it has to be earned. Leaning on audience goodwill, and fobbing off fans with special guest stars (a lot of old friends appear here, including a few whom you thought you’d seen the last of), shouldn’t be a substitute for strong characters and imaginative action.

To be fair, Star Wars was never known for its complex characters; still, the new ones – i.e. those introduced in The Force Awakens – are disappointing. Finn (John Boyega) is a blank, lacking personality; it’s like the writers sank all their energy into having an ethnic-minority character without figuring out what the character should be. Kylo Ren (Adam Driver) just seems misconceived, seesawing between evil genius and wounded puppy with daddy issues. Rey (Daisy Ridley) may be the worst of the lot, because she overbalances the story; she’s too perfect (it doesn’t help that Ridley, unlike Driver and Oscar ‘Poe’ Isaac, isn’t much of an actor). Force-wise, her powers are awesome; she can pull a spaceship back and prevent it from flying – yet she’s also deeply spiritual, and also very gentle. She “transfers life” to a giant serpent creature, healing its wounds, and responds to an Amazon’s semi-embarrassed “Not that you care, but I think you’re OK” with a quiet “I care”. Cynics may be tempted to tag Rise of Skywalker in the style of that snarky Twitter meme: ‘In the end, the real Force… was Love’.

The film has a daunting, probably impossible task. It’s the big one, the grand finale, the ninth of the nine parts George Lucas claimed to be planning back in whenever-it-was. It also has to undo the ‘damage’ wrought by The Last Jedi, which angered part of the fanbase. Its tactic in both these assignments is to play it safe and keep moving fast, not really ending the story (there could easily be an Episode X) and not really trying anything new either. Alien creatures turn up (Fantastic Beasts owes a lot to Star Wars), as do most of the old guard. The visuals are handsome – a light-saber fight against the backdrop of an angry ocean – the banter predictable. The world is divided into familiar good and evil, Jedis and Siths – and if the good guys (and girl) find themselves tempted by the Dark Side, well, that’s familiar too.

“Will this agony ever end?” wails C-3PO – but that’s way too negative. The film isn’t agonising, just a bit inadequate; there’s not enough going on here. Star Wars is over, after 42 years, but there’s no sense of a saga coming to a glorious conclusion (maybe because Disney, its new masters, have no intention of ending it; The Mandalorian is already on Disney+). Grandeur gets lost in the action-packed shuffle – and grandeur, in the end, is what defined Star Wars, the breathtaking sight of those giant spaceships filling the screen back in 1977. “Today we make our last stand!” says Poe. “For the galaxy! For Leia!”. Leia’s gone, my friend. Just accept it.

Anyone is eligible to be nominated for the Nobel Peace Prize