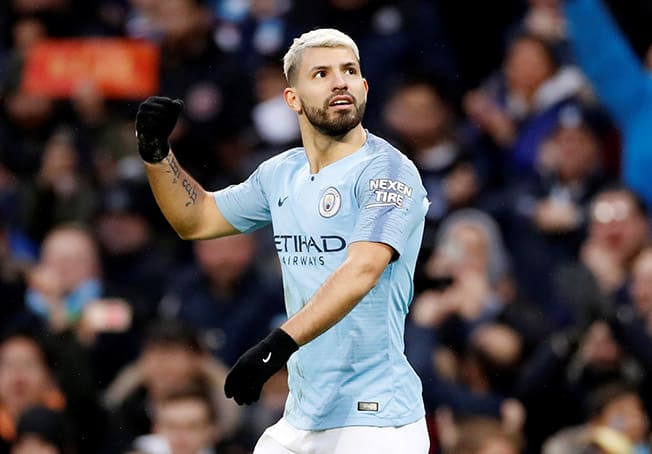 Manchester City boss Pep Guardiola accepts the club will one day need to replace their record goalscorer Sergio Aguero but is not sure they will find one to match his brilliance.

Aguero, 31, has netted 244 times for City since joining the club in 2011 but his contract is due to expire at the end of next season.

City boss Guardiola said: “It will be one of the toughest (tasks). Sergio is irreplaceable.

“We have another incredible striker in Gabriel (Jesus) and maybe another one will come when Sergio leaves, but he is irreplaceable.

“Sooner or later it will happen, he’ll decide when [he leaves]. I’m sure the club will be ready to try to find the guy to replace him but of course it will not be easy.”

He will always be remembered for his dramatic injury-time winner against QPR which clinched the title in the final game of the season in 2012.

Guardiola said: “The most important moment of this club – more important than when this club, hopefully, wins the Champions League – is when Sergio scored that goal against QPR.

“That moment is much better than four titles in one season or whatever and he was the guy.”

Guardiola, whose own contract also expires in 2021, has not yet had any indication of whether Aguero would like to stay on at City. The striker has previously spoken about ending his career back in his native Argentina.

Guardiola said: “I don’t know. He can stay but it depends on his physical condition and desire. I haven’t spoken with him and I don’t know his intentions.

“Like with Vinny (Kompany), who wanted to be here and then went to Belgium, like David Silva – sometimes you have to take a decision – but in most of the cases the players decide.

“I would like Sergio to decide whether he wants more or it is over.”

Aguero returned after a month out as a late substitute in last Saturday’s victory over Leicester.

He is again likely to be on the bench as City travel to Wolves on Friday night.

As prolific as Aguero is, Guardiola recognises he often takes time to get back up to full speed after a lay-off.

Guardiola said: “Now he is still not ready for 90 minutes. When Raheem Sterling is injured he doesn’t need any time to get fit, or maybe half a day.

“Sergio needs a little bit longer for his physical condition. That is the reality. We will give him as many minutes as possible because we need him for the next few months, and the Champions League, as we need all the players.”