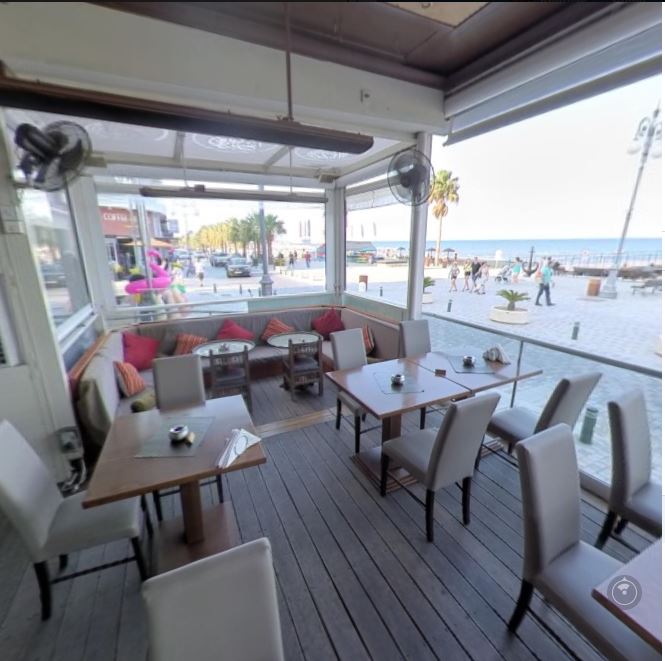 Larnaca’s Finikoudes has been through many changes over the years. Bars, restaurants and the like have been and gone. But one thing that is becoming more apparent is the increase in diversity.

Towards the end of the promenade, close to the medieval castle, you come across Maqam Al Sultan, a fine Lebanese restaurant. It benefits from a lovely sea view and is opposite the small pier, allowing you to go for a little walk after dinner and enjoy the sea view up close.

The outside area that has decking and modern tables and chairs of any of the cafés along the strip. However, take a few steps inside and you will start to feel like you have entered a proper Lebanese restaurant. The first thing to catch my eye was the bar with a Hookah pipe perched on the end of it. The wooden ceiling with intricate carving forms a beautiful design.

The menu includes a mezze option of different dips, hot and cold starters, pastries and a main course of mixed grilled meat. If you’re not a meat eater there is also a vegetarian mezze available. Maqam Al Sultan have not forgotten about vegans as there is a tailor made mezze for them as well.

The mezze sounded wonderful but we opted to create our own and order bits and pieces from the menu.

No Lebanese meal would be the same if it didn’t start with muhammara, a dip made from sweet red pepper, crushed walnuts, olive oil and various herbs. Moutabbal (dip made with aubergine and tahini) and hummus were our other starters. The Moutabbal had a pleasant and moreish smokey flavour to it while the hummus was rich and creamy with a generous amount of garlic! Fattoush was out next. Salad with pieces of fried Lebanese bread to make croutons. It’s very tempting to nab some of the crunch bread off of the salad and have it by itself! My one comment would be that there could have been a little more of the crisp Lebanese croutons in the salad.

The falafel that we ordered came neatly presented on a plate with a little bowl of tahini sauce. The falafel were crisp on the outside and fluffy on the inside. The tahini really set it off and was a great complement. Being a fan of the kouba, I also ordered the Lebanese version called kibbeh. The main difference is that it is made with lamb mince and pine nuts. Don’t forget to cut it open and put some lemon. It really brings out the flavour! The Sultan kalaj was brought out alongside the kibbeh – halloumi filled Lebanese bread cooked over charcoal. The bread is crisp and the halloumi inside warm and soft.

The main dishes were a little on the pricey side so we ordered just the one to share between us. To at least have a little variety, we ordered the mixed grill. A combination of meat that consisted of a lamb cutlet, a skewer of shish taouk, a skewer of kafta and a chicken wing. At €18, that worked out to a little over €5 per serving of meat! To end off a lovely meal, we ordered a little dessert. The Al-Sultan Ashtaliyeh is Lebanese mahalepi. A creamy milk pudding made with rose water and topped with pistachios. It is a light dessert and a perfect taste to end on.

While we were done with the food, we weren’t quite done with the restaurant. We took ourselves outside, sat on the deck watching the sea and indulged in a hookah.

Although we found it a little on the expensive side we still had a thoroughly enjoyable evening. The staff were polite, friendly and helpful, the food was fantastic and I admired the interior décor.

HOW MUCH €39 mezze for minimum 2 people