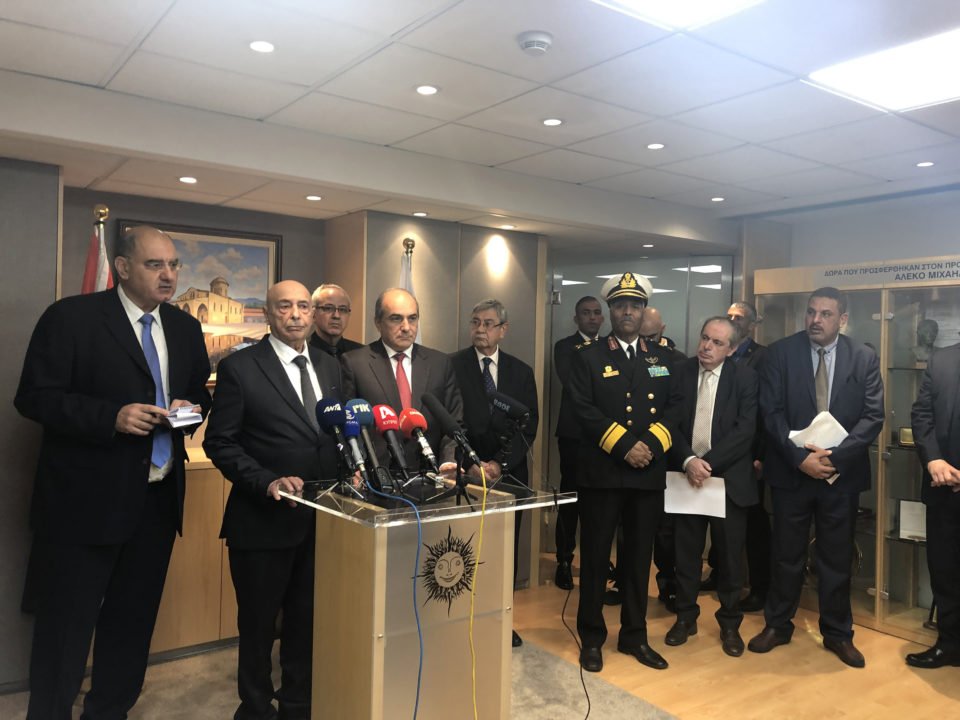 A possible involvement by Turkey in the Libya crisis with the deployment of troops in the country, will mean the complete destabilisation not just of Libya but the whole region, was the message sent by Libyan House Speaker, Aguila Saleh who was in Cyprus on Saturday.

He also wants Foreign Minister Nicos Christodoulides, to convey the message to the EU, the semi-state Cyprus News Agency (CNA) reported. Christodoulides had a meeting on Saturday with Saleh who arrived on Friday at the invitation of House President Demetris Syllouris. He was accompanied by a number of other officials.

According to CNA, citing sources, Saleh asked the Cypriot minister to convey to the EU the message that the Libyans needed to decide their future for themselves. The possible involvement of Turkey in the crisis with the deployment of troops would mean the complete destabilisation not only of Libya but of the whole region.

Democratically elected in 2014, the Libyan House of Representatives was the country’s internationally recognised parliament prior to the advent of the now internationally-recognised Government of National Accord (GNA).

Last month, Ankara signed two separate accords with the GNA, led by Fayez al-Serraj, one on security and military cooperation and another on maritime boundaries in the eastern Mediterranean. Turkey promised to step up military and other assistance to Serraj.

The GNA, based in the capital Tripoli, has been fighting since April to push back an offensive by the eastern-based Libyan National Army forces led by Field Marshal Khalifa Haftar. Libya’s eastern-based parliament is aligned with Haftar, and has rejected the accords reached with Turkey. Haftar is backed by the United Arab Emirates, Egypt and Russia.

Syllouris said Saleh’s visit to Cyprus was not to just exchange pleasantries but was one “of substance” as it would pave the way to closer cooperation between Cyprus and Libya. According to Syllouris, there were two conflicting approaches in the Eastern Mediterranean and the wider Middle East; one seeking war and one seeking peace and prosperity.

“We are working for the cooperation of the states of the region because it is the only way that will lead to prosperity and peace,” Syllouris said. He added that these partnerships would help to peacefully defeat the predatory and war approaches, “with the regions’ peoples following the approach of peace, prosperity and cooperation between them.”

In a joint statement issued after the meeting, Syllouris and Saleh said, inter alia, that the recent signing of a maritime MoU between Turkey and the GNA constituted a blatant violation of international law and lacked any legal basis, since it overlooked the provisions of the UN Law of the Sea Convention and has not been ratified, as required, by the House of Representatives of Libya.

Saleh said among other things that the agreement between Turkey and the GNA was void as per international law, and the Libyan Constitution, courts and the Parliament which has not ratified it. He said Serraj, who leads the GNA, was not authorised to sign the agreement.  Saleh said that the Turkish president took advantage of the split in Libya intending to intervene in Libyan internal affairs.

“His aim is to provoke the countries of the Eastern Mediterranean and to intervene in the exclusive economic zones (EEZ), without taking into account the sovereignty of these states at their maritime and air borders,” he added.

Saleh also said he asked Syllouris to help them make clear what is going on in Libya to the EU arguing that the internationally recognised GNA had failed completely in governing the country given that it has not received the confidence of the House of Representatives.

“All these issues have not been taken into account by some countries that wish to continue the division and destabilisation in Libya with Turkey being among them,” he said.

He also said that a communications committee had been set up between the Cypriot and Libyan parliaments while he also called on Cyprus-based companies and businesspeople to visit Libya.

Following the meeting in Nicosia on Saturday, Syllouris and Salah said in a joint statement that they oppose moves by the Turkish government, “which contribute to escalating tensions and destabilising the wider Mediterranean region.” They also reaffirmed the legitimacy of the elected Libyan House of Representatives.

Their statement said that during their meeting on Saturday they also discussed issues of mutual and wider interest and emphasised the traditional good relations between Cyprus and Libya, as well as the traditional friendship between the two peoples.

They also expressed their support for the UN Special Representative in Libya for his efforts to achieve peace and reconciliation, in accordance with his mandate.

The two House presidents also underlined the need to fight terrorism in order to ensure security and stability in Libya. “We consider the Turkish government’s intention to send troops to Libya unacceptable,” they said, adding that this was an interference in the country’s internal affairs.

Earlier in the week, Turkish President Tayyip Erdogan said his country would be sending troops to Libya at the request of Tripoli as soon as next month.

The Turkish parliament is set to meet on January 2 to approve the motion – the same day Cyprus, Egypt and Israeli are to sign the EastMed pipeline deal with Greece in Athens, which has also angered Ankara.

Moscow has voiced concerns over a possible Turkish military deployment to Libya in support of the GNA. Turkish and Russian officials held talks in Moscow this week to seek a compromise on the issues of both Libya and Syria, where Russia backs President Bashar al-Assad.