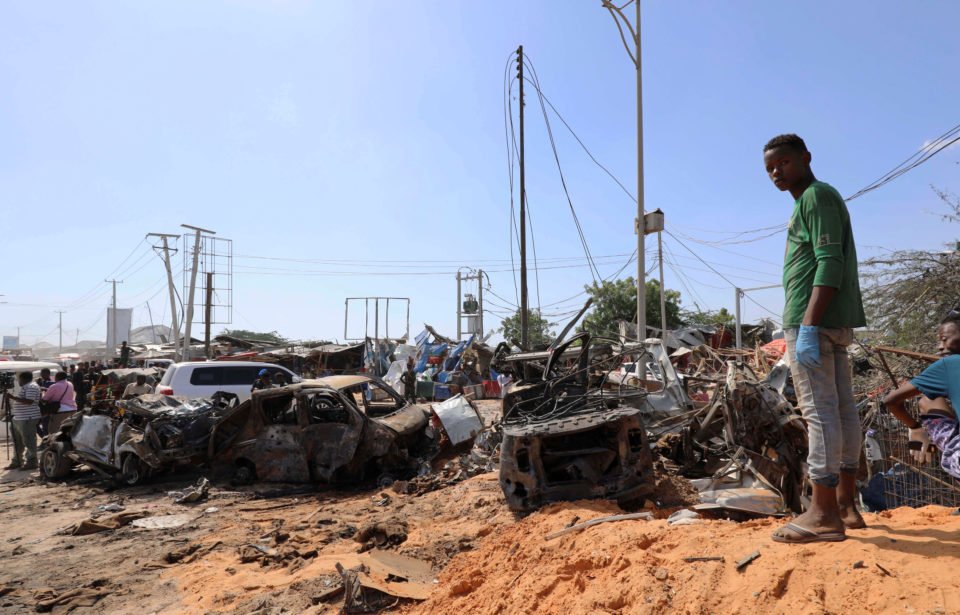 A Somali man stands at the scene of the explosion

At least 90 people were killed when a bomb-laden truck exploded at a busy checkpoint in the Somali capital Mogadishu on Saturday, an international organisation working in the country said, in the deadliest attack in more than two years.

Saturday is a working day in the Muslim country and the explosion occurred during the morning rush hour. Rescuers carried bodies past the twisted wreckage of a vehicle and a minibus taxi smeared with blood.

A report by the international organisation, which did not want to be named, said the death toll was more than 90 and that university students and 17 police officers were among those killed. A Somali MP also tweeted that he had been told the death toll stands at more than 90.

Like other checkpoints in a city scarred by decades of conflict, traffic is often clogged at the Ex-Control Junction, where heavily armed security forces check vehicles for explosives and weapons and other officers direct traffic. There is also a government tax collection point at junction, officials said.

The group regularly carries out such attacks in an attempt to undermine the government, which is backed by the United Nations and African Union peacekeeping troops.

The most deadly attack blamed on al Shabaab was in October 2017 when a bomb-laden truck exploded next to a fuel tanker in Mogadishu, creating a fireball that killed nearly 600 people.

While al Shabaab carries out frequent attacks, the death tolls are often lower than in Saturday’s blast. The group has sometimes not claimed responsibility for attacks that sparked a big public backlash, such as a 2009 suicide bombing of a graduation ceremony for medical students.

A number of attacks this year, including one in September on a base where U.S. special forces train Somali commandos, show the group maintains a strong intelligence network and can mount deadly and sometimes sophisticated operations, analysts say.

Three witnesses told Reuters that a small team of Turkish engineers were present at the time of the blast, constructing a road into the city.

Turkey’s foreign ministry confirmed the death of two of its nationals.

Turkey has been a major donor to Somalia since a famine in 2011, and together with the government of Qatar is funding a number of infrastructure and medical projects in the country. Turkey opened a military base in Mogadishu in 2017 to train Somali soldiers.

After the explosion, 55-year-old Sabdow Ali, who lives nearby, said he left his house and counted at least 13 people dead.

“Dozens of injured people were screaming for help but the police immediately opened fire and I rushed back to my house,” he told Reuters.

The injured were transported to Medina Hospital, where a Reuters witness saw dozens arriving by ambulance, and to other hospitals.

A nurse at Medina, speaking on condition of anonymity, said the facility had received more than 100 wounded people. Weeping relatives gathered outside the entrance as they sought information on their loved ones.

Speaking to reporters at the blast site, Mogadishu Mayor Omar Muhamoud said students were killed as they commuted to their studies, many of them to the capital’s Banadir University.

Somali Foreign Minister Ahmed Awad tweeted that many of the dead were “students with ambition, and hardworking men and women.”

The mayor blamed al Shabaab for the attack, without giving details.

Police officials were not immediately available for comment on casualty numbers.

Somalia has been riven by conflict since 1991, when clan warlords overthrew dictator Siad Barre and then turned on each other.

Al Shabaab grew out of a political movement that used Islamic courts to try to impose order on the country. U.S.-backed Ethiopian soldiers defeated the Islamic Courts Union in 2006, but the movement’s youth wing split off and launched an insurgency. Al Shabaab pledged loyalty to al Qaeda in 2012.

The AU peacekeeping force, in Somalia since 2007, has been gradually withdrawing its forces over the past several years. Somali forces are scheduled to assume responsibility for security next year, though the precise date of the withdrawal has repeatedly shifted.

“Somalia is not ready to take over control of security next year or the year after,” said Hussein Sheikh-Ali, a former national security adviser and founder of the Hiraal Institute, a Mogadishu-based security think-tank.

Saturday’s attack was the 20th vehicle-borne explosives attack of 2019 and the year is ending with more deaths from such attacks than 2018, he said.

Al Shabaab has also carried out attacks in east African countries such as Kenya and Uganda. It claimed responsibility for an attack in January on an upscale hotel and office complex in the Kenyan capital that killed 21 people.

Relentless Liverpool have no time for reflection

Libyan Speaker, on Cyprus visit, warns of ‘complete destabilisation’ in the region (Update 2)