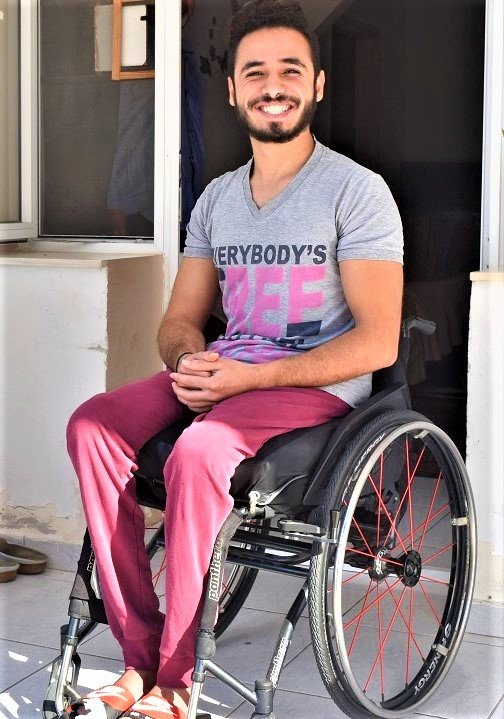 After more than a decade of writing for the Cyprus Mail, I am usually in a quandary when the annual email requesting our top story of the last 12 months arrives in my inbox. In past years, an abundance of articles I written throughout the year flood to mind, all jostling for the top spot.

Not so this year.

My thoughts go straight to Ali, a 22-year-old Iraqi that I met in November at his home in Paphos.

Ali fled from Isis terrorists, a horrific experience that has left him paralysed from the waist down and in a wheelchair. I often think of him, not least because of his inspiring attitude.

Accompanied by an Arabic translator, I was invited to meet Ali at his family home, a simple single story house in Paphos.

We are greeted at the door by Ali’s parents, both are warm and welcoming. The door swings open and I see Ali for the first time.

He is a human-sized magnet, with a huge, positive presence that emanates. His megawatt smile literally radiates, filling every corner of the room. This is a special young man.

Ali greets me in perfect English, his manner relaxed and affable, simultaneously confident yet unassuming.

He is a polite and intelligent young man. He wanted to be a pharmacist but doesn’t think that is possible now. He has taught himself English and some Greek and is studying online to complete his high school diploma.

Looking at him as I make my goodbyes and leave a few hours later, it’s hard to comprehend the gut-wrenching terror that he has experienced, and the story that he has just willingly shared.

Ali tells me that in June 2014 Isis proclaimed itself a worldwide caliphate. Brutal fighters stormed the Salahuddin area, north of Baghdad where he lived, and gun-toting masked men clad in black, terrorised his community.

Isis erected huge screens in the streets showing footage of people being dragged away, tortured and killed.

In his last year of school and aged just 17, panic stricken, Ali jumped off a roof as Isis members chased him.

I look at his parents as he tells me his story, I can feel their pain. Ali recounts how he lay ‘broken and bleeding’ on the ground, Isis forces checked his body, roughly kicking his side with a boot, before leaving him for dead. This was witnessed by horrified members of his family, including his mother.

She pours me an orange juice and as she glances at me, I see the depth of pain she feels for her son.

Ali fell on his back, breaking it as blood poured from his ears. He is now paralysed from the waist down. There is no self-pity as he tells his terrible tale, sitting in his wheelchair next to me.

One of Ali’s doctors in Iraq collaborates with the American Heart Institute in Nicosia and they sorted out his visa for him in 2016, however, the operation in Cyprus was not successful.

I can only hope that the Cyprus authorities will step up and help this young man, as Ali is still waiting for a residence card that would allow him to travel abroad for a specialised operation that may enable him to walk again.

Ali and his family are proud people but desperately need financial support to obtain the medical supplies that Ali needs. As none of his family currently has Cyprus IDs, they are not able to sign up to the Gesy national health scheme, so have to pay for medicine themselves.

Ali uses around 150 catheters and 20 urine bags a month. He also uses pampers and gloves and has to take vitamin C, vitamin B12 and vitamin D3. He needs help to purchase these.

Ali claimed asylum in 2016 and unsurprisingly has made many friends. He loves sport and plays basketball with Apop wheelchair basketball club and is proud that he is the first team member from Iraq.

As Ali and his family speak, I am overcome with the senselessness of it all. They talk about family members and friends that disappeared in Iraq, never to be seen or heard from again.

Through it all, Ali keeps smiling. He is a real hero.

Family whose son’s ashes were stolen, return to Sweden

Coronavirus: People restricted to one district in the north

Coronavirus: App will show how crowded supermarkets are