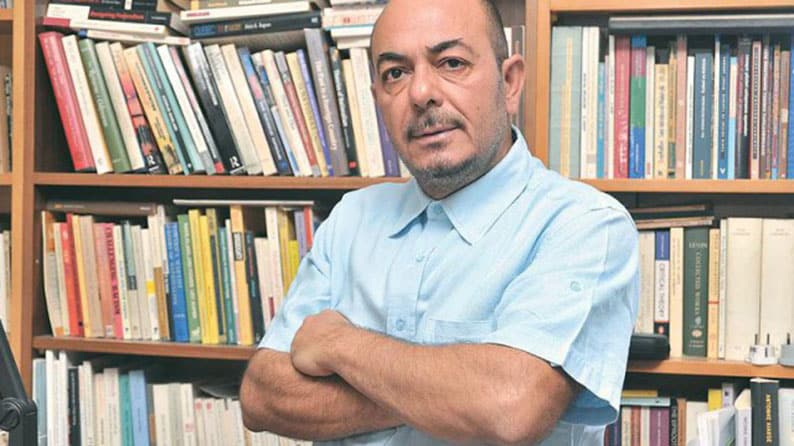 Adverse weather conditions, tricky mountain roads and a prickly politician made profile writing a challenge in 2019

2019 was a year of risking life and limb in pursuit of profiles.

With hindsight, the winding mountain road which I took to get to Militsa – the apple cidery in Farmakas run by transplanted Aussie Nigel O’Connor – was no big deal (especially since there was no other traffic). Still, driving down that road for the first time, negotiating sharp bends while also climbing steeply at the same time, felt quite dangerous – even though it was worth the hassle just to talk to O’Connor, a former sailor and foreign correspondent now making award-winning cider in the hills of Cyprus.

No such caveats apply to my journey to Limassol in the middle of a hailstorm to meet famous cult actor Udo Kier, which really was dangerous – not so much the conversation with Mr Kier, though he’s played all manner of monsters and degenerates over the years (he was here as president of the jury for Cyprus Film Days), but certainly the drive down. This was April 19, and a freak storm which (I later learned) devastated most of the cherry crop in the mountains. Things weren’t much better on the highway, with my windshield wipers frantically trying to deflect the barrage. Chunks of hail were piled on the hard shoulder. The line of cars slowed to a crawl, then, near Skarinou, stopped altogether; a car had overturned, blocking the road. I saw another overturned car on the way back, as I slunk home fully expecting to hear about multiple fatalities on the evening news. (Incredibly, there weren’t even any serious injuries.) Udo Kier was delightful, of course.

The obvious punchline is to add that all this – hailstorms, overturned cars, roads in chaos – pales into insignificance when compared with interviewing Niyazi Kizilyurek. I won’t go that far – but this was certainly the year’s prickliest interview, taking place in mid-May just before Kizilyurek won election as an MEP, the first Turkish Cypriot ever to do so.

It’s worth dwelling on our awkward meeting, because it brought home something fundamental that’s easy to lose sight of. I’ve now written hundreds of profiles for the Living section of the Sunday Mail; I wrote 44 more in 2019, and indeed this was also the year when I brought out a book (The Lives of Others) with a selection of 60 profiles, written over 10 years. It’s easy to imagine that I’ve learned how to bring people out – yet in fact Kizilyurek made it clear that my skills, such as they are, only go so far. Simply put, interviewing is a bit like hypnosis: it’s impossible to interview someone who doesn’t want to be interviewed.

That, I believe, was the problem there, exacerbated by some practical issues. We were due to meet on Friday afternoon; Kizilyurek assured me we’d have at least 45 minutes, even though he was madly busy with his election campaign – but in fact he got delayed on Friday, so the interview got shifted to first thing on Monday. My usual m.o. is to go in knowing just the basics about a subject, so I can be surprised and steer the conversation to whatever sounds interesting – except when I know in advance that time is limited, in which case I find out more and prepare specific questions. I went in on Monday planning the first kind of interview, but in fact (as I should, perhaps, have realised) Monday wasn’t Friday: he had a full schedule, with a TV panel later that morning. He expected the second kind of interview, and even that was pushing it; after 10 minutes, he began to get impatient.

‘When did you become conscious of a Turkish Cypriot identity, over and above the Cypriot one?’ I asked – actually a naive question, since he’s always claimed there was no ‘Cypriot’ identity among Turkish Cypriots anyway (but I didn’t know that). “I’m sorry to do this interview with you,” griped Kizilyurek. “I’m getting all the wrong questions, and I have to correct them. I mean, you don’t have the basic information about my view, writings, positions, etc.” As things unravelled, his attack-dog tendencies – glimpsed in assorted TV debates – came to the fore. “What are your own politics? Are you a nationalist?” he asked at the end, crushingly. What a disaster.

Profile-writing isn’t exactly like journalism. Writing a news story works best with a specialist; writing profiles calls for a generalist. A reporter constantly has to guard against being fed the wrong information; in writing a profile, no information is wrong per se, because it adds to the bigger picture (even if a subject lies, or exaggerates, it’s significant that they lied or exaggerated). What I learned in 2019, however, was that – much more so than a journalist who can, after all, fall back on the facts of a story – I’m entirely dependent on the subject choosing to go on the journey with me, and somewhat lost if they don’t. Then again, I’ll be happy just to go through a year’s worth of profiles without getting killed in 2020.