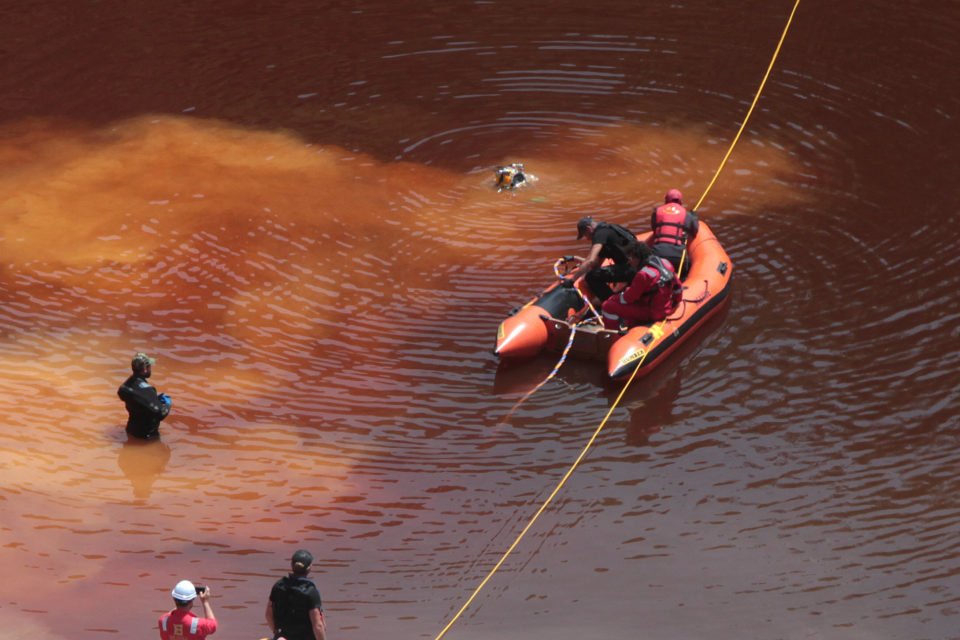 Diving for bodies at the toxic red Memi lake

No one could have imagined the horror that followed the discovery of a woman’s body in an abandoned mine shaft in Mitsero in April this year.

Police quickly arrested the woman’s estranged husband, raising expectations that despite the tragedy, it was an open and shut case.

Far from it. What unfolded in the next few weeks is probably the most horrific peacetime crime in recent history, as Cypriots came to terms with the callous killings of five women and two children, daughters of two of the women.

Cyprus had its first recorded serial killings. And they were perpetrated by one of its own.

Greek Cypriot National Guard captain Nicos Metaxas, 35, confessed to the killings, leading investigators to the locations where he dumped the bodies.

The public watched in horror as authorities recovered a second body from the mine shaft at Mitsero in the following days after his arrest, but it took another two months before the last one was recovered.

He had thrown one in a well near a firing range in the same area. One was recovered from a lake, and three others were placed in suitcases and thrown in the toxic Memi lake at the mine.

Father of two Metaxas received seven life sentences for his crimes, the harshest punishment ever handed by a Cypriot court to a defendant who for the first time in the Republic’s history, had been charged with so many counts of premeditated murder.

“I accept full responsibility for my actions and am ready to face the consequences,” a tearful Metaxas told the court. “I cannot go back in time and undo what I have done.”

“Cypriot society will be wondering how one of its members reached this point,” he said, adding: “I have also asked myself why; I have not yet managed to find an answer.”

Three of the women were from the Philippines, one from Nepal and one from Romania. Most were working as housekeepers. The two children were aged six and eight.

The shocking case emerged on April 14 when the body of Marry Rose Tiburcio, 39, was discovered by tourists and local bikers in the mine shaft that had flooded following heavy rains. It was wrapped in a sheet, arms and legs bound.

Arian Palanas Lozano, 28, was found a couple of days later. Both were from the Philippines.

The third body, that of Asmita Khadka Bista, 30, was found near a firing range in Orounta on April 25.

The last body to be retrieved was that of Tiburcio’s daughter Sierra on July 12. She had been wrapped in a sheet and thrown into the Xyliatos lake, weighed down by a concrete block.

The first shock when the case saw the public light quickly gave way to indignation after it transpired the police had failed to adequately investigate Tiburcio and her daughter’s disappearance, reported when they first went missing.

Tiburcio had been reported missing in May 2018, along with Sierra. Her roommate told police she had gone to meet a man she had connected with on dating app, Badoo, taking her daughter with her. The roommate told police the online name used by the man was Orestis. Staff from Sierra’s kindergarten also contacted police to report the girl had not turned up.

The woman and her child were expected to return at 6am on May 5. They were never seen again.

Lozano had been reported missing in July 2018. She had also gone to meet a man she had connected with on Badoo, using the same online name, Orestis.

In fact, police were led to Metaxas after they tracked down Orestis’ electronic address, something they apparently did not bother doing when the first woman was reported missing.

Nor did them leaving behind all their belongings raised any red flags. Sierra’s passport was found at her father’s house after he was wrongly arrested early in the investigation.

A friend of Bunea said police did not even call her in for a statement when she reported the mother and child missing in September 2016.

As with the rest of the missing women, police, without investigating, believed they had crossed to the north as some domestic workers do in search of other employment.

But the clues were all there. The friend said all Bunea’s things were left behind in the house, while Bunea’s own mother, with whom she had daily contact, had no idea where they were and was also looking for them, as was her ex-husband.

“They (police) never asked me for an official statement, they were reassuring us they are doing their job, ” she said, adding  that she had received the same response as journalist Gogo Alexandrinou who had tried to help at the time as well as Yiota Papadopoulou, the wife of Diko leader Nicolas Papadopoulos when she called to enquire about the case.

“We have valid information that she crossed to the north, it’s what they said,” the woman said.

When police spokesman Andreas Angelides was called late in 2016 to speak on Alexandrinou’s live news programme to inform the public on the ongoing investigation, he said that “there is no evidence to point us towards a particular direction.” He reportedly said police had checked their home and that they had left.

However, TV footage when the mother and daughter’s names first came up as possible victims of the suspected serial killer, showed their home did not look as if anyone had left, and their clothes were still there. A bottle of medicine could also be seen on the table, believed to have belonged to Elena Natalia.

The public outcry led to the dismissal of police chief Zacharias Chrysostomou and the resignation of justice minister Ionas Nicolaou.

Independent investigators were also appointed to look into the force’s handling of the cases. Reports this week suggested the findings were damning for over a dozen officers who could face disciplinary or criminal prosecution.

The case has also highlighted the treatment of foreign workers in Cyprus, especially female. Though Metaxas has not said why he targeted the particular women, it is thought he did so because they had fewer ties in the country.

The police inaction also proved that they were probably treated that way because of who they were.

Child protection campaigner Anastasia Papadopoulou summed up the mentality perfectly at the time: “Would investigations be of the same ‘intensity’ if it were a Cypriot mother and her child?”