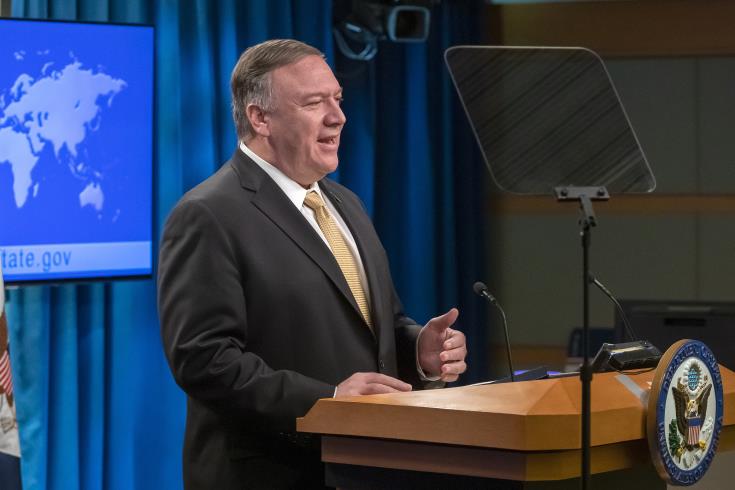 The forthcoming visit of US Secretary of State Mike Pompeo to Cyprus is important and meaningful, Foreign Minister Nikos Christodoulides said on Monday.

Following confirmation that Pompeo will be visiting Cyprus on January 7, his last stop on a tour of several countries, Christodoulides said that during the visit issues related to further strengthening bilateral relations between the Republic of Cyprus and the US will be discussed as will initiatives by Nicosia in the eastern Mediterranean.

“This is an important and meaningful visit,” Christodoulides told the Cyprus News Agency.

“During the visit we will have the opportunity to discuss how concrete actions further enhance the bilateral cooperation between the Republic of Cyprus and the US in all areas on the basis of a positive approach.”

The Cyprus News Agency, citing sources in Washington, noted the agenda of Pompeo’s visit will revolve around US-Cyprus bilateral relations in light of the lifting of the arms embargo, the partnership pact on cooperation in the Eastern Mediterranean, plus the Cyprus issue.

Reports said a bilateral agreement is expected to be concluded in Nicosia, something that was discussed during Christodoulides’ recent trip to the US capital.

The upcoming agreement is said to relate to a statement of intent signed between the two diplomats in late 2018 and reaffirmed on November 18 this year.

In his comments, Christodoulides said that they will have the opportunity to exchange views on regional developments “at a time of particular challenges in the eastern Mediterranean” as well as the regional cooperation that Cyprus and Greece have developed with countries in the region.

According to Christodoulides they will also exchange views on how the US government can help end Turkey’s illegal activities in the eastern Mediterranean, “which will allow, among other things, the resumption of substantive talks on the Cyprus issue from where they left off in Crans-Montana.”

While in Cyprus, Pompeo is to have separate meetings with the two leaders, Nicos Anastasiades and Mustafa Akinci.

In a press statement, the US State Department said Pompeo is scheduled to travel to Kiev, Ukraine; Minsk, Belarus; Nur-Sultan, Kazakhstan; Tashkent, Uzbekistan and Nicosia, Cyprus from January 3-7.

“..on January 7, the secretary will travel to Nicosia where he will meet with President Anastasiades and Foreign Minister Christodoulides to reaffirm the robust US-Republic of Cyprus relationship,” the statement read.

“While there, the secretary will also meet with Turkish Cypriot leader Akinci. The secretary will reaffirm to leaders of both communities continued US support for UN-facilitated Cypriot-led efforts to reunify Cyprus as a bizonal, bicommunal federation in line with UN Security Council resolutions.”

Pompeo’s visit will come days after the US Congress passed the ‘Eastern Mediterranean Security and Energy Partnership’ bill applying to Cyprus and Greece.

Among others the bill mandates the compilation of a report scrutinising Turkey’s violations of Cyprus’ exclusive economic zone (EEZ) but also one detailing Russia’s influence in Cyprus.

Moreover, the chief US diplomat will be visiting the island just days after Cyprus, Greece, and Israel are set to sign an agreement for the construction of the EastMed pipeline, on January 2.

That agreement is seen as a response to a maritime deal between Turkey and Libya, which has ignored the rights of other countries in the region.

Reports said Pompeo will then fly back directly to the United States, where he is scheduled to meet Greek Prime Minister Kyriakos Mitsotakis on January 8.