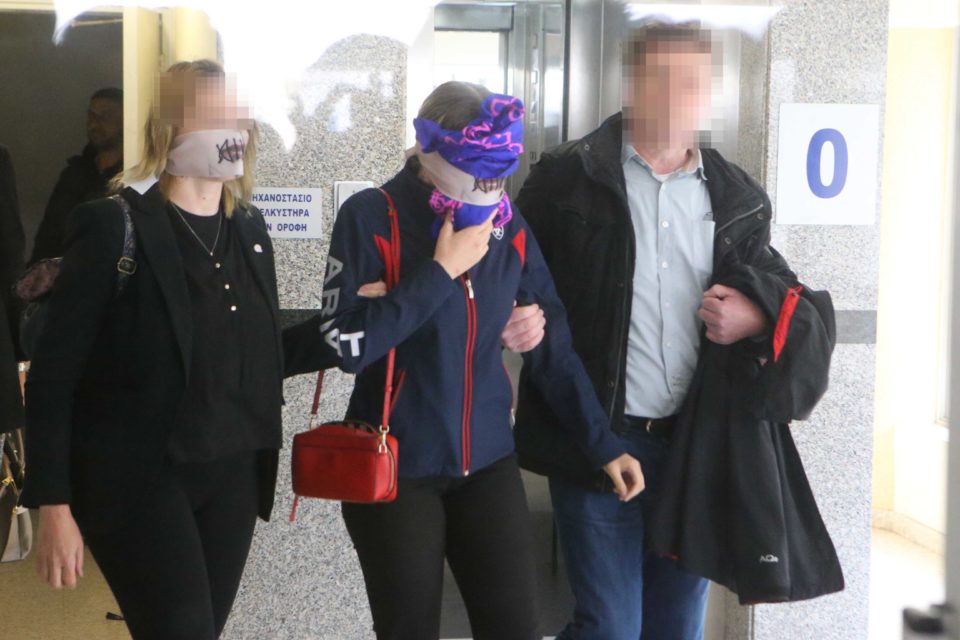 The 19-year-old outside court after the verdict on Monday

The UK government has said it is “seriously concerned” about the fairness of the trial of the British woman found guilty on Monday of lying about being gang raped in Ayia Napa.

A spokesman for the Foreign Office has said the UK is “seriously concerned about the fair trial guarantees” in the “deeply distressing case” of the 19-year-old. The Foreign Office said it will be raising the issue with the Cypriot authorities.

The defence team of the British woman found guilty by the court in Paralimni of lying about being gang-raped by 12 Israeli tourists in Ayia Napa in July, said it is to appeal to the Supreme Court and will go all the way to the European Court of Human Rights if necessary.

The woman was convicted of a single count of public mischief by the Famagusta District Court in Paralimni after judge Michalis Papathanasiou said prosecutors had proved her guilt beyond a reasonable doubt. She is to be sentenced on January 7 where she faces up to a year in jail and a 1,700 euro fine.

Defence lawyer Nicoletta Charalambidou told a mob of reporters and cameramen outside the court that they planned to appeal against the verdict. This could take as much as four years.

“The decision of the court is respected,” she said. “However, we respectfully disagree with it. We believe there have been many violations of the procedure and the rights of a fair trial of our client have been violated. We are planning to appeal the decision to the Supreme Court, and if justice fails … we are planning to take our case to the European Court of Human Rights.”

Dressed in a sleeveless black top and black trousers with her head covered and accompanied by her mother, the convicted teen gave a thumbs-up to a group of supporters as she left the courthouse. Both she and her mother wore masks depicting a pair of lips sewn together that were given to them by demonstrators outside the court.

Public mischief is defined under the law “as knowingly providing police with a false statement concerning an imaginary offence”.

The 19-year-old who has not been named in the media, said she was attacked and raped by 12 Israeli tourists – who had filmed the incident – in an Ayia Napa hotel room on July 17 but retracted the allegation ten days later after which charges of public mischief were brought. She spent a month in jail and was released in August but has not been allowed to leave the island.

The Israelis, who denied rape, were released and returned home. However the woman and her defence team later said she had not been afforded due process by the authorities and that the retraction statement was obtained by police under duress, and that in fact she had not written it at all.

But judge Papathanasiou, in his ruling said the teen had not told the truth and had tried to deceive the court with “convenient” and “evasive” statements.

He ruled that the interrogation did not amount to undue pressure and her statement – which her defence team claimed did not appear to have been written by a native English speaker – was admissible.

“My conclusion is that the guilt of the accused has been proven beyond reasonable doubt,” he said in his verdict. He said the young woman’s claims had been inconsistent and that she had tried to mislead the court.

“The defendant gave police a false rape claim, while having full knowledge that this was a lie. During her testimony, the defendant did not make a good impression, she did not tell the truth, and tried to mislead the court.” 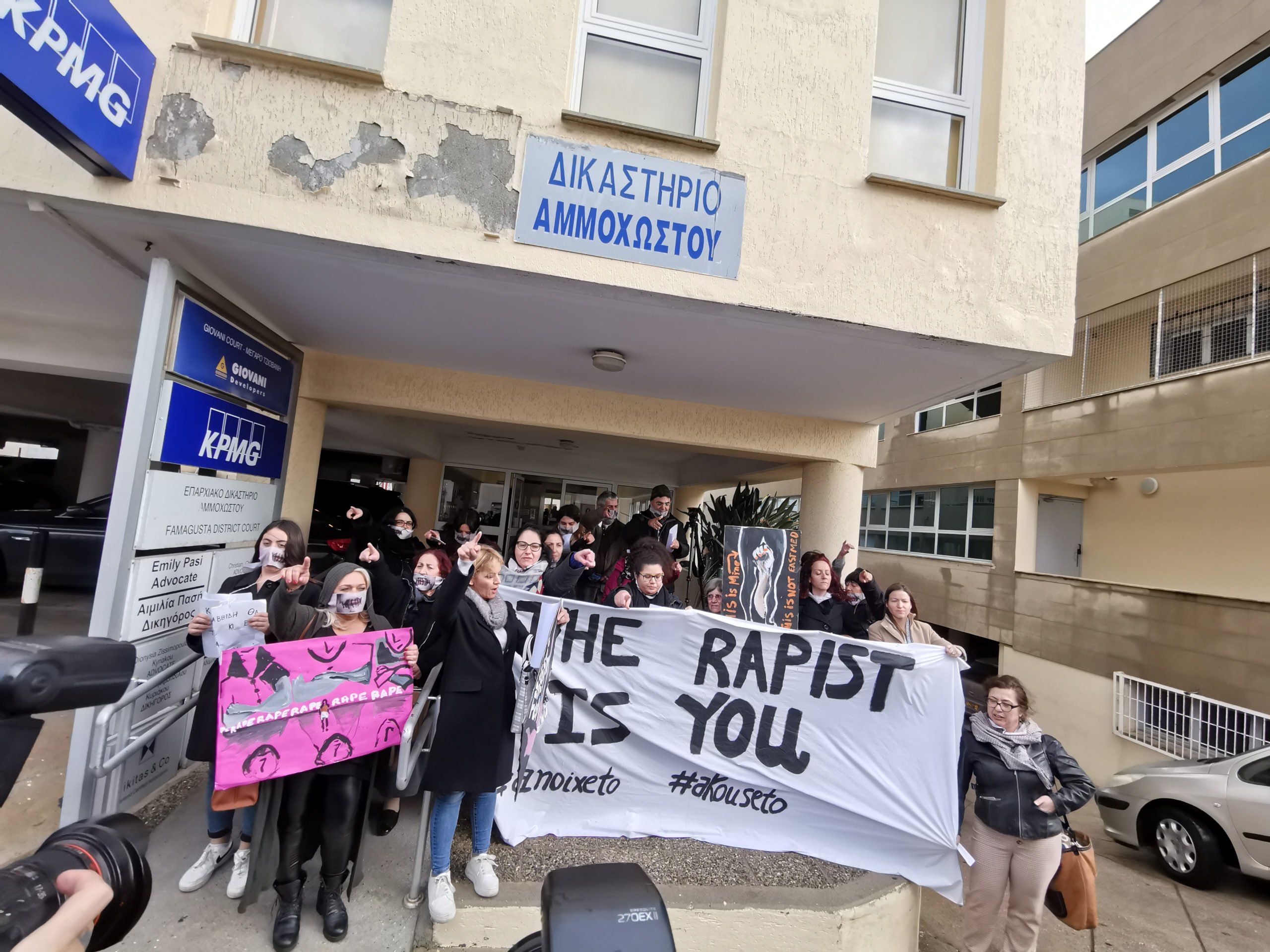 Demonstration outside the court on Monday

The teen had told a hearing earlier in the month that she initially agreed to have sex with one of the accused men, a man identified only as Sam, 21, who she met while working in Ayia Napa. She said his friends then burst into the room and she shouted out “No.”

“I said I am not doing that and told them all to go,” she said. “They left for a few seconds and Sam told me to lie on the bed and he got on his knees and put them on my shoulders.” She said she was then pinned down and raped multiple times by members of the group who were aged between 15 and 22.

“I tried to cross my legs. I was trying to throw my arms about,” she told the court. “I don’t know how many of them raped me. I couldn’t see.”

Nir Yaslovitzh, a lawyer representing some of the Israelis said on Monday: “I applaud the court’s decision to convict. I hope the court will find it appropriate to aggravate the punishment imposed on the girl, who refuses to this day to take responsibility for the horrible act she’s done against the boys.”

The judge ruled there had been no rape or violence, and that police had carried out a thorough investigation. He said his decision was backed by video evidence showing the teen having consensual sex.

“The reason why she initially gave false statements was because she realised that she was being recorded while she was having sexual intercourse and so she was placed in a difficult position and felt embarrassed. She then apologised saying she had made a mistake by filing a false statement,” the verdict said. This was the only time she had told the truth, the judge ruled.

“She tried to avoid giving answers and part of her statements could not be accepted. I could observe no reliability on her part of her defence. She was never clear on what happened. She was not stating the truth and I reject the version she gave to the court.”

Papathanasiou said five witnesses had testified for the prosecution and had included evidence, and this testimony, he said, was credible.

“They made a very good impression. They gave direct and clear answers to the questions they were asked and their replies left no room for dispute.”

The judge rejected the testimony on behalf of the defendant given by former state pathologist Marios Matsakis who testified that the rape kit exam presented in court as evidence was incomplete. ”There was no examination of the teenager’s clothing which is surprising,” Matsakis had told the court, adding that the woman was “obviously in bad shape with a large number of external injuries, most of which were recent”.

“He clearly tried to serve the needs of the defence and did not substantiate his conclusions. His documentation was generic and does not represent the documentation one would expect from a forensic doctor,” the ruling said. On the contrary the examination of the woman by the designated state pathologist in the presence of a gynaecologist found no evidence of rape or violence.

The court in its ruling also rejected positions taken by the defence in respect of alleged police misconduct, infringement of the defendant’s right to a fair trial and infringement of her rights, criminal activity and malicious violence.”

During mitigation, after the verdict was read out, defence lawyer Ritsa Pekri asked the judge for leniency and a suspended sentence, citing her young age and saying that the woman had been under strong psychological pressure at the time.

“She’s been in prison for one month and in Cyprus, effectively as a prisoner, for five. She’s lost her friends, her place at university, her social life. She now has psychological problems as a result of the incident. She should be allowed home to be treated,” said Pekri.

Justice Abroad, which has been assisting the British woman and her family confirmed in a statement the defence team would be appealing the decision to the Supreme Court of Cyprus and from there to the European Court of Human Rights if the teenager could not receive justice in Cyprus before the Supreme Court.

The group’s Michael Polak said: “Although the defence team is very disappointed with the decision of the court having put a lot of effort into the lengthy trial process and after bringing expert evidence before the court we are not surprised by the result given the frequent refusal during the trial of the judge to consider evidence which supported the fact that the teenager had been raped.”

He added: “Shutting down questioning from our Cypriot advocates and the production of evidence into the trial on a handful of occasions the judge stridently stated ‘this is not a rape case, I will not consider whether she was raped or not’. We have found it incredibly difficult to follow this logic given that an essential element of the offence is for there to be a ‘false statement concerning an imaginary offence’ and therefore, clearly if the teenager was raped, she cannot be guilty.”

He said this would form a ground of appeal before the Supreme Court of Cyprus along with a number of what he described as failings in the trial process which resulted in the teenager not receiving a fair trial before the district court as guaranteed by Cypriot law as well as both European Community Law and European Human Rights law.

The teenager’s family is continuing to raise funds on the Go Fund Me page www.gofundme.com/f/Help-Teen-Victim-Get-Justice-In-Cyprus and wished to thank all those from the United Kingdom, Israel, and the rest of the world who have contributed to the fundraising campaign at what is a difficult and unexpected time for them, Justice Abroad said.

As the defendant left the court supporters shouted: “We are with you. We know. We believe you.”

Argentoula Ioannou from the Network Against Violence Against Women told media: “I think the verdict was wrong because it was decided on the wrong basis. That is why the judge demanded in the process of the trial that he didn’t want to hear anything of the rape.

She added: “We are here to show solidarity for the young lady who instead of being treated as a complainant for the rape that she suffered is here accused of public mischief. Unfortunately, we strongly believe that the rights of this young lady have been violated.”