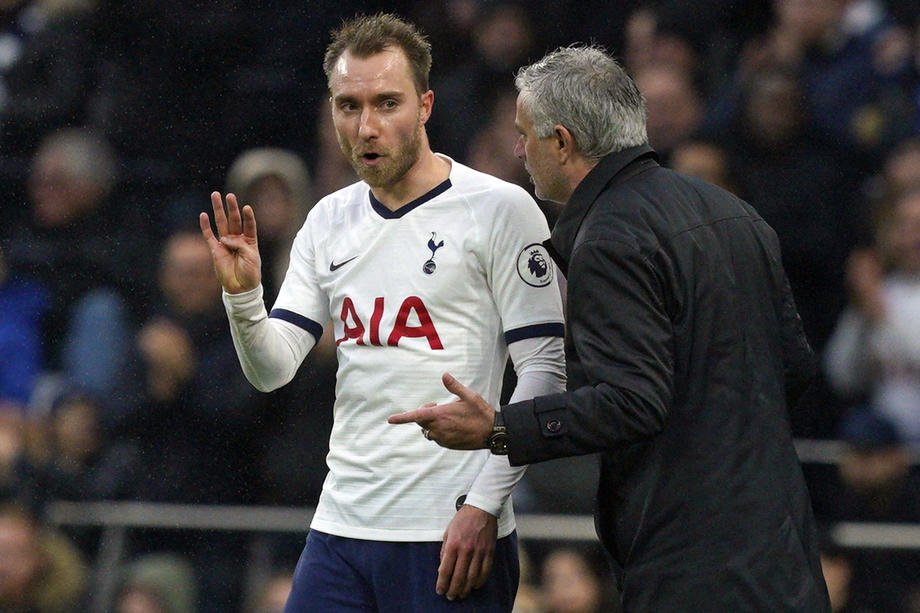 Tottenham will try to retain Christian Eriksen in the January transfer market window.

With the transfer window set to open again on January 1, plenty of business is expected to be done by Premier League clubs.

The hunt is on for the right player at the right price to come in and help the battle for points at both ends of the table.

While January has often proved to be a testing market, Chelsea are expected to tackle it head on after the club’s two-window FIFA transfer ban was halved by the Court of Arbitration for Sport on appeal.

Frank Lampard is determined to have a big say in how his young squad is strengthened, with reports suggesting a bumper budget of £150million.

The Blues have already been linked with the likes of Crystal Palace forward Wilfried Zaha and Leicester defender Ben Chilwell.

New Arsenal head coach Mikel Arteta appears to have a rebuilding job on his hands after taking over at the Emirates Stadium.

The Gunners splashed out over the summer, including on record signing Nicolas Pepe.

Arteta, though, is likely to focus on some more defensively minded acquisitions, with Leicester midfielder Wilfred Ndidi a reported target, while Atletico Madrid winger Thomas Lemar is an attacking option.

Granit Xhaka and Lucas Torreira, meanwhile, have been linked with exits.

New Everton boss Carlo Ancelotti could be ready to go back to Italy to bolster his squad – defender Kalidou Koulibaly and Lorenzo Insigne are both reported targets.

At West Ham, a loan move for Real Madrid striker Luka Jovic was said to have been in the pipeline before Manuel Pellegrini was dismissed on Saturday, but new boss David Moyes could revive the club’s interest.

Quality not quantity is likely to be the mantra for several clubs in January.

However, getting that one key deal over the line can often be a struggle.

Manchester United manager Ole Gunnar Solskjaer had been hoping to land Norway striker Erling Haaland, only for the 19-year-old to instead switch from Red Bull Salzburg to Borussia Dortmund.

Along with Grealish, Leicester full-back Ricardo Pereira and midfielder James Maddison are said to also be on the Red Devils’ wanted list – or could Jadon Sancho be tempted to move the other way in a blockbuster January deal?

Haaland’s fellow Red Bull Salzburg forward Takumi Minamino is another definitely on his way to Liverpool. A £7.25million deal for the Japan international could prove shrewd business for the Premier League pacesetters.

Manchester City may be playing catch-up on Jurgen Klopp’s side in the title race, but do not expect massive January spending. Germany winger Leroy Sane has been linked with a switch back to the Bundesliga.

Guardiola has insisted that City will not be drawn into the January market, but could he be tempted in a bid to close the gap on leaders Liverpool if the right deal presents itself?

With the Foxes flying, manager Brendan Rodgers maintains nobody will be leaving in January despite plenty of interest in his talented squad.

The Leicester boss is also still on the lookout to add some talent if available – Juventus’ Turkish defender Merih Demiral and AC Milan’s Hakan Calhanoglu are potential targets – but with a settled squad he may be tempted to stick rather than twist this January.

Jose Mourinho has never been one to turn down the chance to bring in a new face or two.

However, with defender Toby Alderweireld having committed his future to the club, getting the best out of the talent already within the squad might well be the Portuguese coach’s prime directive.

Meanwhile, a decision over trying to retain Christian Eriksen or cashing in on the Dane needs to be made by chairman Daniel Levy.

With Wolves aiming to last the distance in another impressive campaign, Red Bull Salzburg striker Hwang Hee-chan has been linked with a £19million Molineux switch.

Chelsea’s 19-year-old midfielder Conor Gallagher has impressed on loan at Charlton, which has apparently seen him attract interest from Burnley.

Newcastle boss Steve Bruce says he has a “few plates spinning” as the window opens – with Juventus winger Marko Pjaca a potential target.

Norwich head coach Daniel Farke, though, appears resigned to fight on at the bottom of the league without any major investment, while trying to keep hold of young talents like full-back Max Aarons.