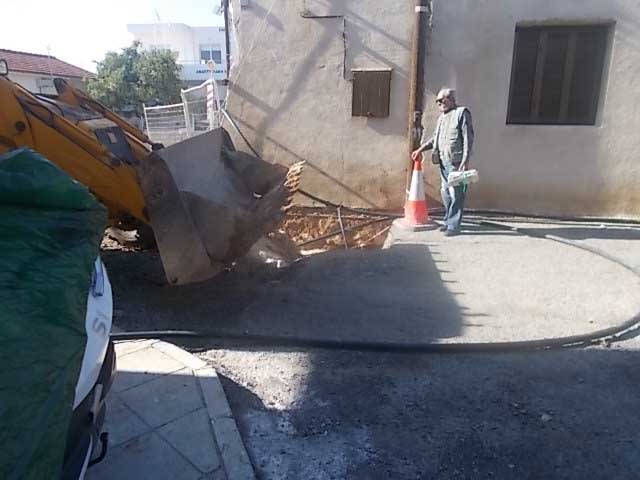 ROAD works have become a safety hazard for some elderly residents of Ypsonas in Limassol who say that gaining access to their own homes has become a nightmare.

Reconstruction of Archbishop Makarios III Avenue in Ypsonas, Limassol by the department of public works with the addition of new pavements and pedestrian crossings began a year ago.

The left side of the road was closed until recently, with traffic being directed to the adjacent lane. Now that that’s done, the right side of the road has now been closed for reconstruction leaving residents in despair that the works will never be finished.

The works have also affected a number of side roads leading to the main avenue.

In some cases, works are taking place directly outside people’s front doors, blocking their driveways with excavators and making it hard for them to get in and out of their homes. During rainy days, elderly locals are forced to walk in mud, they said.

“We are prisoners in our own house,” 84-year-old Bob Cracknell told the Cyprus Mail.

Cracknelll lives with his wife Jennifer on a secondary street leading to Makarios Avenue. Road works on the street have blocked all private parking of houses, and drivers are forced to park at a public car park on the opposite side. Residents must then cross over a temporary pedestrian steel bridge.

“If we are lucky enough to find parking there during the holidays or the weekends,” the pensioner said, “we have to walk two kilometres to and from our house.”

“They did put a bridge over the deep trench. However, once over the bridge we then have to walk along an uneven thick muddy path to reach the gap between the concrete barriers,” he added.

What is most alarming to elderly people like Cracknell is the lack of emergency access from and to the home.

His wife Jennifer, 76, has already survived three bouts of cancer, a stroke and a heart attack. She is under close supervision and her husband is her primary caregiver, he said.

He said there is only one entrance in the house through their private parking which is completely blocked by the ongoing works.

“An ambulance or a stretcher do not have any access to our house,” Cracknell said. The accessibility issue also obliged the couple to cancel a planned gathering on Boxing Day.

Apart from the lack of access, most houses on the specific street were left with no water for a few days before the holidays without any warning, unable to even flush the toilet.

It appears most people living at that street are facing similar issues, according to Cracknell, but no one is willing to complain.

“I know their private parking slots are blocked and they have to search for parking elsewhere too but I don’t know why Cypriots don’t complain!”

Cracknell said no one was notified about the new works which started outside his home about a month ago and are expected to finish in April.

The department of public works however claimed the contractor send a letter with a written warning prior to the works to all the affected residencies.

Thrasos Afamis, an official from Limassol public works told the Sunday Mail: “It is impossible for people not to get affected during any sort of road works.”

When asked about the blackouts, he said Electricity Authority was dealing with power outages, and referred the public to the water board in relation to the lack of water supply.

According to Afamis, the contractor is doing his best to assist all the residents and even carries their shopping bags from the temporary parking space to their houses.

Our View: Cyprus keeps shooting itself in the foot

‘Too late to leave’: Bushfires out of control across southeast Australia (Updated)