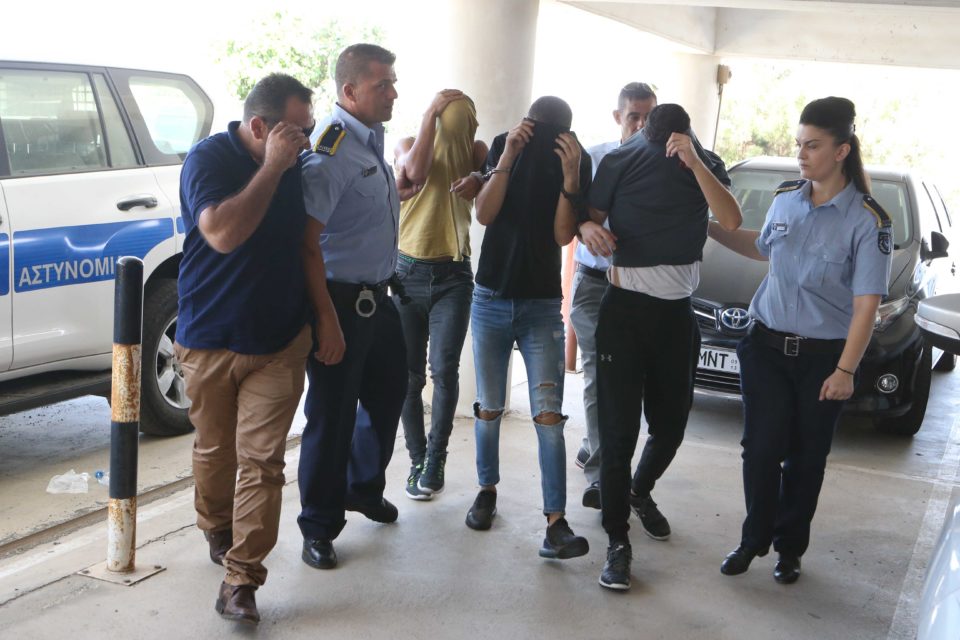 Some of the Israelis being taken to court

Speaking in an interview with the Daily Mail, on the 12 Israelis initially accused of raping a British teenager in Ayia Napa in the summer has said he will take her to court for compensation.

The Famagusta District court this week ruled the 19-year-old was guilty of public mischief after she retracted the charge against the Israeli youths of gang-rape. She has told the court however she made the retraction after police told her too and she was interrogated alone for seven hours.

Israeli Yona Golub told the Daily Mail the teen has turned his life into a nightmare.

“We’re preparing to sue her,” he said. “She deserves to go to jail.”

On Tuesday the woman will be sentenced, with the charge carrying a maximum penalty of a €1,700 fine and a year in prison.

The Daily Mail spoke to Golub in the town of Afula, near Nazareth. The paper said the 18-year-old did not express any sympathy for the woman.

Instead, it reported, he insisted that he and the other youths were victims. He admitted his life was back to normal but claimed: “We deserve compensation for what we went through. I don’t know how much I should get.

“They need to put her in prison and only afterwards should they deal with the compensation.”

When the Israelis were released from police custody in Cyprus in the summer they returned to a hero’s welcome but support for them in the Israeli media has since turned against them.

According to the Daily Mail director of pastoral counselling at the Hebrew Union College in Jerusalem Professor Ruhama Weiss will fly with more than 40 other Israelis to Cyprus on Tuesday to show solidarity with the Briton.

Golub, who was held on remand for eight days in Cyprus, told the paper he was not among the Israelis who were in the room with the teenager when she claimed she was raped but in bed in the same budget hotel with an Israeli girl.

He said he was arrested simply because he was on holiday with two friends who had been in the room.

Police released him after his girlfriend gave them a selfie she had taken of them in her room at the time the rape was said to have taken place.

Golub was not among the seven pictured on their return home dancing in an airport arrivals hall.

He had returned two days earlier.

“The police took DNA swabs from our mouths and the enormity of what happened began to hit me.

“I was sure I was going to be put in prison for my whole life,” the Daily Mail quoted him as saying.

However, Justice Abroad’s Michael Polak, who has advised the Briton’s family through the trial, told the paper that Golub’s complaint should be against the Cyprus police.

“If Mr Golub was arrested by the Cypriot police in relation to this incident and was not involved, this may be because the Cypriot police swept up a number of Israeli youths and then failed to hold an identification parade of any kind. It is quite possible, as I have stated in previous statements, that the Cypriot police arrested people who were not involved in any offence against the teenager and had never seen her as claimed by Mr Golub,” Polak told the paper.

“If this happened to Mr Golub then his complaint lies against the Cypriot Police.”

British foreign minister urges Cyprus to ‘do the right thing’