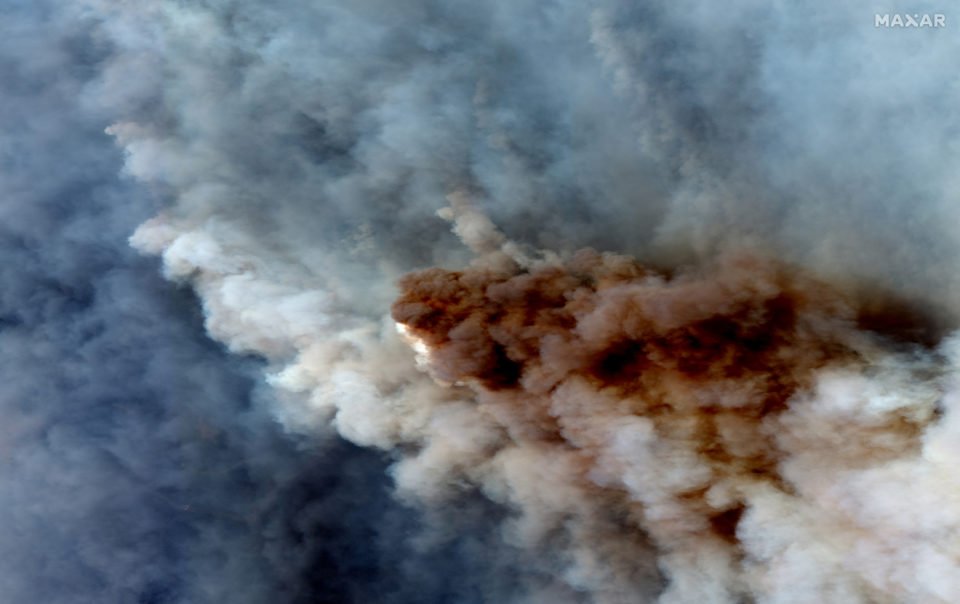 A natural color satellite image shows smoke from wildfires burning east of Obrost, Victoria, Australia January 4, 2020. Satellite image ©2020 Maxar Technologies/Handout via REUTERS. ATTENTION EDITORS - NO RESALES. NO ARCHIVES. THIS IMAGE HAS BEEN SUPPLIED BY A THIRD PARTY. MUST NOT OBSCURE LOGO. MANDATORY CREDIT.

A dangerous fire flared up in southeastern Australia on Sunday even as cooler conditions elsewhere allowed authorities to begin assessing the damage from heatwave-spurred blazes that swept through two states on Saturday.

Officials told residents and others in the New South Wales (NSW) state town of Eden to leave immediately and head north if they did not have a bushfire response plan.

“If your plan is to leave, or you are not prepared, leave towards Merimbula or Pambula,” the Rural Fire Service said in an alert.

Tens of thousands of homes in both NSW and Victoria states were without power on Sunday as a large-scale military and police effort continued to provide supplies and evacuate thousands of people who have been trapped for days in coastal towns by the fires.

Initial estimates put damaged or destroyed properties in the hundreds, but authorities said the mass evacuations by residents of at-risk areas appear to have prevented major loss of life. Twenty-four people have been killed since the start of this year’s wildfire season.

Sunday’s cooler temperatures and light rain forecast in some coastal areas in coming days could bring some relief, but officials said that would not be enough to bring the almost 200 fires still burning under control.

Fire officials said the next major flashpoint would come later in the week, but it was too early to gauge the likely severity of the threat.

“The weather activity we’re seeing, the extent and spread of the fires, the speed at which they’re going, the way in which they are attacking communities who have never ever seen fire before is unprecedented,” NSW Premier Gladys Berejiklian said.

Thousands of people have been evacuated from coastal towns at the peak of the summer holiday season, in one of the biggest coordinated operations since the evacuation of Darwin after Cyclone Tracy flattened the northern city in 1974.

Australia has been battling blazes across much of its east coast for months, with experts saying climate change has been a major factor in a three-year drought that has left much of the country’s bushland tinder-dry and susceptible to fires.

Following are highlights of what is happening across Australia:

* In the Southern Highlands region south of Sydney, a new fire was burning out of control after the winds helped drive an existing blaze to jump the Shoalhaven and Kangaroo rivers.

* Another fire near the southern coastal town of Eden was at Emergency level, and the ABC reported police have warned people should leave for evacuation centres.

* Haze from the fires was turning skies orange in New Zealand; police there asked people to not call the emergency phone number.

* The death of a 47-year old man who was defending a friend’s rural property in NSW took the national toll this season to 24. NSW Premier Berejiklian said there was no one unaccounted for in NSW; Victorian authorities said seven people were unaccounted for in Victoria.

* The federal government on Saturday announced an unprecedented call up of army reservists to support firefighters as well other resources including a third navy ship equipped for disaster and humanitarian relief. It also announced the creation of a federal bushfires response agency.

* RFS Commissioner Fitzsimmons criticised the government for not informing him of its policy proposal, saying he found out about it from the media and it created confusion on one of the busiest days ever for fighting fires.

* PM Morrison faced criticism for a video he posted on social media outlining how the government is tackling the fires. Morrison has been under sustained attack handling of the crisis after he jetted out for a family holiday in Hawaii. He apologised and returned early but was heckled and snubbed when he toured fire-hit regions in recent days.

* More than 5.25 million hectares (13 million acres) of land has been burnt this fire season. Almost 1,500 homes have been destroyed in NSW state alone.

Our View: we need a sense of perspective over EastMed pipeline