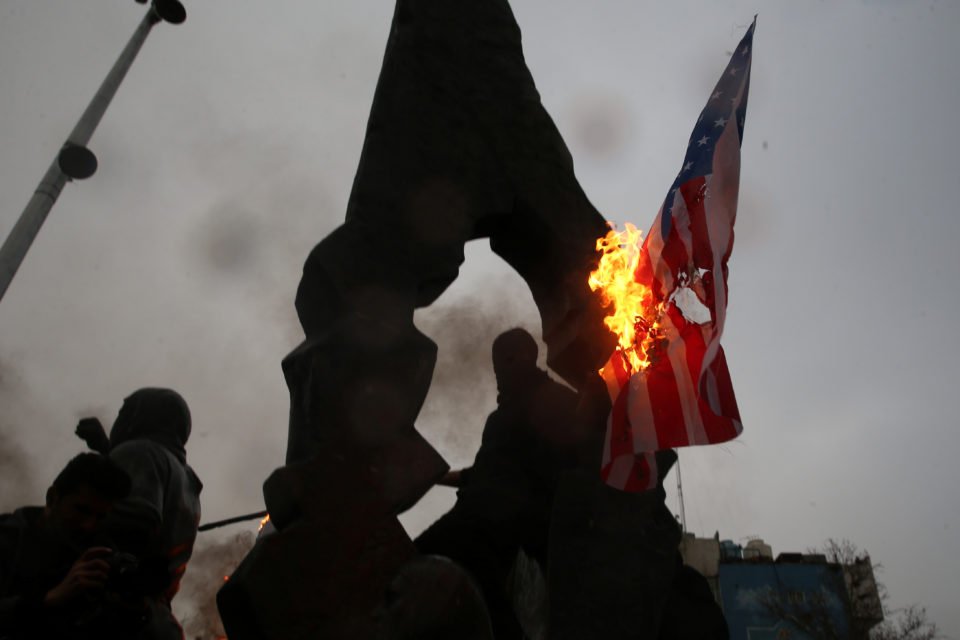 Iranians burn U.S and Israeli flags as they gather to mourn General Qassem Soleiman via REUTERS

WASHINGTON, Jan 4 (Reuters) – President Donald Trump said on Saturday the United States has targeted 52 Iranian sites that it would strike if Iran attacks Americans or U.S. assets in response to a U.S. drone strike that killed Iranian military commander Qassem Soleimani in Iraq.

Showing no signs of seeking to reduce tensions raised by the strike on Friday that he ordered, the U.S. president issued a stern threat to Iran on Twitter.

….targeted 52 Iranian sites (representing the 52 American hostages taken by Iran many years ago), some at a very high level & important to Iran & the Iranian culture, and those targets, and Iran itself, WILL BE HIT VERY FAST AND VERY HARD. The USA wants no more threats!

Trump wrote in a series of tweets that Iran “is talking very boldly about targeting certain USA assets” to avenge Soleimani’s death. Trump said the United States has “targeted 52 Iranian sites” and that some were “at a very high level & important to Iran & the Iranian culture, and those targets, and Iran itself, WILL BE HIT VERY FAST AND VERY HARD.”

“The USA wants no more threats!” Trump said, adding that the 52 targets represented the 52 Americans who were held hostage in Iran after being seized at the U.S. embassy in Tehran in 1979.

Asked about Trump’s tweets during an interview with Fox News, White House national security adviser Robert O’Brien said “the president is trying to make it clear to the Iranians that this is a very bad path for them to go down.”

O’Brien added: “The Iranians should be very careful. … We’ve said we consider the matter resolved — if they decide to move forward against the United States there will be severe consequences as the president pointed out.”

Trump’s suggestion that the United States could strike targets of importance to Iranian culture raised eyebrows.

Colin Kahl, a former Obama administration national security official, wrote on Twitter that he found it “hard to believe the Pentagon would provide Trump targeting options that include Iranian cultural sites. Trump may not care about the laws of war, but DoD (Department of Defense) planners and lawyers do … and targeting cultural sites is war crime.”

The Pentagon declined to comment on the 52 targets and referred questions to the White House, which did not respond.

Former Vice President Joe Biden and other Democrats criticized Trump’s tweets, with some including U.S. Senator Elizabeth Warren saying the president was threatening to commit a war crime. “The more the walls close in on this guy, the more irrational he becomes,” Biden said in a statement.

The U.S. strike on Soleimani’s convoy at Baghdad airport also killed Iranian-backed Iraqi militia leader Abu Mahdi al-Muhandis, and it raised the specter of wider conflict in the Middle East. On Saturday, tens of thousands of people marched in Iraq to mourn both commanders.

Trump’s tweets were issued during his holiday stay in Florida. A growing number of Democrats have said the Republican president’s action is bringing the United States to the brink of war.

House of Representatives Speaker Nancy Pelosi, a Democrat, said on Saturday “the Trump Administration’s provocative, escalatory and disproportionate military engagement continues to put service members, diplomats and citizens of America and our allies in danger.”