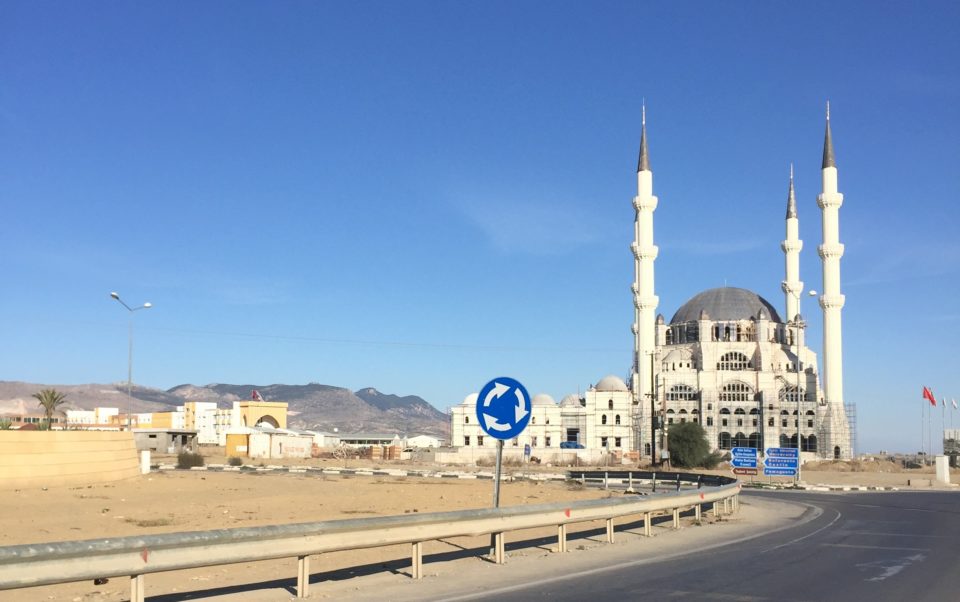 Huge, newly erected minarets rise up into the sky

Many people ask me why I occasionally visit the occupied part of Cyprus. There are many reasons.

Most importantly, I go because I believe that I cannot have an opinion on the Cyprus problem without acquiring a detailed understanding of what is happening in the north. I feel that I must ensure that I formulate my opinion on the basis of what I see and hear with my own eyes and ears.

Thus, I have met many Turkish Cypriots. I have met settlers (many of whom were of Kurdish origin), who based on international law have probably acquired the right to remain permanently in Cyprus as a result of their extended stay on the island, regardless of the fact that the original arrival of their ancestors was undoubtedly an illegal move. Those that I have met appeared to be honest and hard working people.

I have also seen huge Turkish flags waving across northern Cyprus as well as huge, newly erected minarets rising up in the sky, and I have noted that most Greek location names have been replaced by Turkish names.

I must admit though that I do not go to the occupied territories merely to acquire a comprehensive and objective view of what is happening there. I also go because I yearn to see the places in which I was raised; to hear the summer whispering or the winter roaring of the sea; to see the plains turn green in the spring and the lemon blossom, spreading its wonderful aroma in the late summer. I happen to be a co-owner of these lands and I have the right to be there. And I must say that whenever I visit these occupied lands, I feel that I am welcome there. I hasten to add that I have never set foot in a casino, nor have I ever bought cigarettes or petrol there.

There is another convincing argument for crossing the Green Line. Our children and our grandchildren must have the opportunity to get to know the land of their ancestors so that they are not forced to split their memories between ‘this side’ and ‘the other side’. The acquaintance with our ancestral land is a right as well as a duty. The slogan ‘I will not forget’ has become a self-adhesive sticker, which goes on T-shirts and on school walls. Needless to say it is naive to believe that we discharge our patriotic duty to liberate the occupied territories by affixing the odd sticker here and there.

You may ask: “do you get upset when your identity is checked at the crossing point”? No doubt, it is an annoying and humiliating process, having to show your identity in order to be allowed to cross over to your homeland. On the other hand, it is a resounding reminder that a large part of Cyprus has been under occupation for over 45 years and that there is an urgent need to do whatever is necessary to end this unacceptable situation. In any event, I find it logical that the occupation army would wish to control who is entering and who is leaving the occupied territory.

Others may argue that we must at least stand up and say ‘no’ to the occupying forces. I would respond to this suggestion by pointing out that such a response entails a serious risk, namely the risk of getting a comforting feeling that we have thus discharged our duty to liberate the occupied part of Cyprus. Regrettably, the Greek Cypriots, who have come to terms with their conscience, both in terms of what they have done and in terms of what they have failed to do, are numerous. These are the people who have passively accepted the partition of Cyprus.

I do not have the right to criticise those unwilling to visit the occupied territories. However, I must say that I get upset with the hypocrisy of the few Greek Cypriots, who blatantly support the expropriation of northern Cyprus to Turkey and, at the same time, claim patriotic laurels. This is indeed an oxymoron. I weep every time I witness the galloping turkification of northern Cyprus. That is the reason that I will never come to terms with the idea of partitioning Cyprus. I will never adopt the slogan ‘we over here and they over there’, which is systematically promoted by the supporters of the division of our homeland.

The national identity of a group of people is a multifaceted and multidimensional concept. Primarily, it covers the element of the cultural and the linguistic identity of the people, then come their values and their customs, then it is their religion and at the very end come the identity card and the passport. The Greek element of Cyprus’ culture goes back at least twelve centuries before Christ. These references are in no way intended to challenge the right of Turkish Cypriots to exist on this land and to consider this land as their homeland. In fact, as a result of the ‘long-term struggle’ that was promoted by the short-sightedness of certain Greek Cypriot leaders, this right has now been acquired – whether we like it or not – by many Turkish settlers.

With the creation of the European Union and Cyprus’ and Greece’s accession to the European Union, the issue of the police identity card and the passport ceased to have their previous importance. In contrast, the institutional rules that govern our day-to-day lives are being homogenised at an accelerating pace. The roots of this edifice appear to be fairly robust and capable of providing adequate assurances that we are not going to relive the traumatic experiences of a world war and of the civil wars that followed both in Greece and in Cyprus. Despite these developments, a few of our compatriots strangely choose to ignore this progress and remain attached to the reasoning and the thinking of a bygone era.

There is no doubt that our leaders carry huge responsibility for the dystocia in adapting our thinking to the changing circumstances. This is what has led us into the terrible situation that we are finding ourselves today. However, assigning responsibility is a task that belongs to historians and not to political columnists, whose task is confined to identifying past political mistakes, analysing, in a cool, objective fashion, the present and assisting in formulating the future, without fear of prejudice. Bear in mind, however, that included in the world of analysts are political commentators who serve alien interests. It is your duty and obligation to evaluate the positions and the opinions of third parties as well as the information they feed you with by forcing such information through a vigorous assessment process of your own and to test such information and opinions for reasonableness and plausibility, resulting in accepting certain elements and in rejecting others.

Within the framework of this ongoing evaluation process, I cross the Green Line two to three times a year to have a direct, correct and comprehensive understanding of what is happening in the occupied territories. This is how I have been led to the conclusion that the last lifeline we have in preserving the Greek cultural elements of Cyprus is the Turkish Cypriots, who are far from happy with the stifling stranglehold of Turkey.