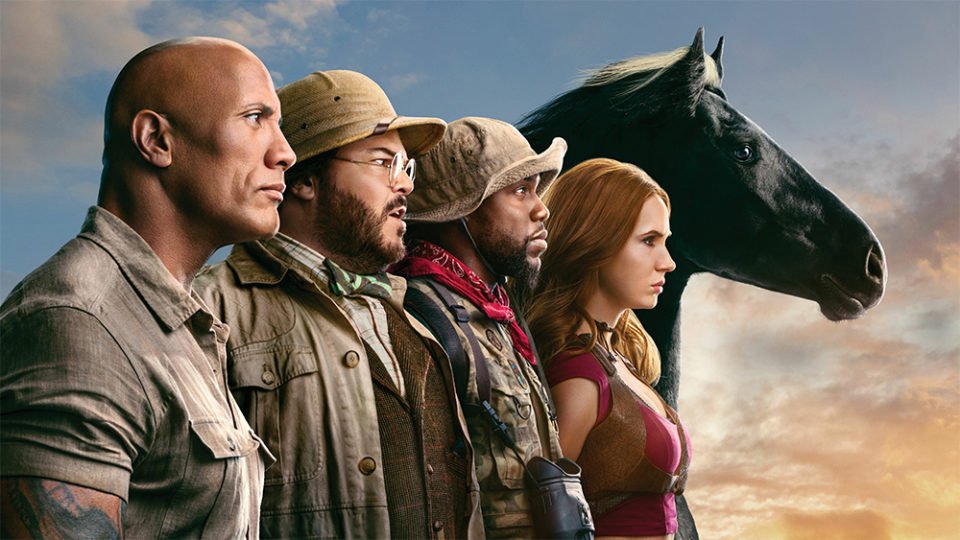 No-one would describe Jumanji: The Next Level as next-level filmmaking, unless the ‘next level’ is the one where films turn into glorified video games. Still, this lively adventure comedy – following 2017’s Jumanji: Welcome to the Jungle, which in turn followed (and massively improved upon) the 1995 Jumanji – does include much to be thankful for. It skews slightly darker than its predecessor, and also has major roles for senior citizens, a demographic not often seen in multiplex movies – indeed, with ‘OK boomer’ (the new obnoxious version of ‘Whatever’, roughly translating as ‘Shut up, you’re old’) rapidly becoming an internet meme, this affectionate showcase for two 70-something Dannys (Danny Glover and Danny DeVito) may count as something of a public service.

It’s also funny, even if it suffers from the same problem as The Lego Movie 2 a few months ago: even the best joke isn’t quite so hilarious when being told for the second time. The joke in this case concerns four teens who enter a magical video game (set in the jungle, hence the title of the previous movie) and find themselves inhabiting unfamiliar avatars, so the weedy geek is now in the body of Dwayne Johnson – his character is Dr Smolder Bravestone, an action hero with a sideline in “smouldering intensity” – the brainy girl is a martial-arts expert, etc. The Next Level offers tweaks on that formula, moving from the jungle to other settings as well as changing up who’s in what avatar.

I won’t spoil the details – but suffice to say that the aforementioned Dannys join in the game, adding a poignant note as they find themselves in rejuvenated bodies (“My joints are like butter!”) and allowing Johnson and Kevin Hart to channel their inner old fart. “We’re in a video game?” asks Johnson for the umpteenth time – old people do keep repeating things – while Hart says “Goodness!” and “Oh, my” (he’s the courtly geezer to Dwayne’s crotchety one) and nearly gets everyone killed by talking incredibly slowly – old people do take forever to get to the point – while explaining how to ward off attacks by angry monkeys and hordes of killer ostriches. It’s perhaps not entirely affectionate (there’s a slight ‘OK boomer’-ish undertow), yet the joke – unlike the Dannys – never gets old. Jungle turns to desert, to the strains of Lawrence of Arabia music, but the elderly gents remain nonplussed: “So what part of New Hampshire is this, exactly?”.

Speaking of angry monkeys and killer ostriches is also a reminder that young kids (unlike elderly gents) may be rather frightened here: one image in particular – it involves a giant snake – is the stuff of childhood nightmares. Our four heroes all lose ‘lives’ as they move through the game, finding themselves on their last life as they battle Jurgen the Brutal (“Is that Barbara’s boy?”) – and The Next Level is a bit less carefree than Welcome to the Jungle in other ways too. Spencer (Alex Wolff), the weedy teen who became Dr Bravestone in Jungle, isn’t really happy to be back in his own body, racked by insecurity and social-media angst; his girlfriend’s Instagram makes him feel so inadequate that he promptly breaks up with her, then escapes into the made-up world of Jumanji. The whole thing seems a bit more geared to anxious tweens and teens than little kids.

Still, the tone is bouncy. The comedy is inventive: our heroes switch bodies, ditzy Bethany finds herself in the body of a horse, zoologist Franklin (that’s Hart) discovers he can talk to animals. The action is inventive too, though it suffers from the usual curse of CGI blockbusters: it’s too much. A dizzying chase involving ostriches, dune buggies and a sheer cliff-edge could easily have been the climax – but there’s still an hour to go. A later set-piece with Bravestone and Co. leaping from one hanging bridge to another is a highlight, then the actual climax in the palace of Jurgen the Brutal – Franklin and Professor Shelly (Jack Black) pose as brothers, one of them known as “the bravest eunuch in Jumanji” – is another highlight. The Next Level gets a bit numbing, like so many Hollywood tentpoles (the problem, of course, is that, once you’ve accustomed people to Too Much, they feel short-changed by Just Enough), and I guess the title is a bit misleading too; it should really have been called ‘Jumanji: The Same Level as the Previous One (and Actually a Little Bit Lower)’. The ending sets up yet another sequel, which would surely be too much of a good thing – yet the film is full of energy and prime comic business, even beyond the welcome sight of the two Dannys. Flaws and all, I’ll take it.

Cyprus policies do not allow for retaliation, but steps are taken, President says