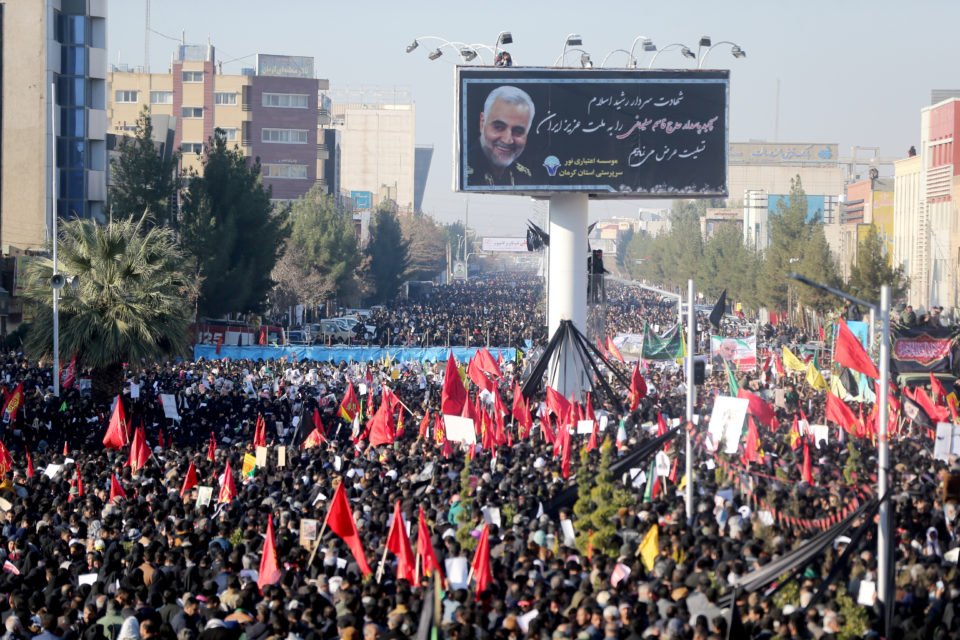 At least 56 people were killed in a stampede as tens of thousands of mourners packed streets for the funeral of a slain Iranian military commander in his hometown on Tuesday, forcing his burial to be delayed by several hours, state media said.

General Qassem Soleimani’s burial began in the early evening in the southeastern Iranian city of Kerman, four days after his killing in a US drone strike in Iraq that plunged the region into a new crisis and raised fears of broader conflict.

“A few minutes ago his body was transferred to the martyrs section of Kerman cemetery,” the semi-official news agency ISNA reported, adding that Soleimani’s interment had begun.

Soleimani, who commanded the elite Quds Force, was responsible for building up Tehran’s network of proxy armies across the Middle East. He was a pivotal figure in orchestrating Iran’s long-standing campaign to drive U.S. forces out of Iraq.

A senior Iranian official said Tehran was considering several scenarios to avenge his death. Other senior figures have said the Islamic Republic would match the scale of the killing when it responds, but that it would choose the time and place.

“Today because of the heavy congestion of the crowd unfortunately a number of our fellow citizens who were mourning were injured and a number were killed,” emergency medical services chief Pirhossein Kolivand told state television.

Soleimani was a national hero to many Iranians, whether supporters of the clerical leadership or not, but viewed as a dangerous villain by Western governments opposed to Iran’s arc of influence running across the Levant and into the Gulf region.

Iran’s opponents say its proxies have fuelled conflicts, killing and displacing people in Iraq, Syria and beyond. Tehran says any operations abroad are at the request of governments and that it offers “advisory support”.

Soleimani’s body had been taken to Iraqi and Iranian cities before arriving in Kerman for burial.

In each place, huge numbers of people filled thoroughfares, chanting “Death to America” and weeping with emotion. Supreme Leader Ayatollah Ali Khamenei wept as he led prayers in Tehran.

The US defence secretary denied reports Washington was preparing to withdraw troops from Iraq, where Iran has vied with Washington for the upper hand since the 2003 US-led invasion.

About 5,000 U.S. troops remain in Iraq, where there has been a US military presence since Saddam Hussein’s fall.

Some members of the 29-nation NATO alliance said they were moving some of their personnel that have been training Iraqi security forces out of the country as a precaution amid fears of a regional conflagration.

“We will take revenge, a hard and definitive revenge,” the head of Iran’s Revolutionary Guards, General Hossein Salami, told the throngs in Kerman before the stampede.

Ali Shamkhani, secretary of the Supreme National Security Council, said 13 “revenge scenarios” were being considered, Fars news agency reported. Even the weakest option would prove “a historic nightmare for the Americans”, he said.

Iran, whose coastline runs along a Gulf oil shipping route that includes the narrow Strait of Hormuz, has allied forces across the Middle East through which it can act. Representatives from those groups, including the Palestinian Islamist Hamas and Lebanon’s Hezbollah movement, attended funeral events in Tehran.

Despite its strident rhetoric, analysts say Iran will want to avoid any conventional military conflict with superior US forces and is likely to focus on asymmetric strikes, such as sabotage or other military action via proxies.

US President Donald Trump has threatened to target 52 Iranian sites if Iran retaliates for Soleimani’s killing.

Iraq’s parliament, dominated by lawmakers representing Shi’ite Muslim groups who have been united by the killing of Soleimani alongside an Iraqi Shi’ite militia leader, passed a resolution on Sunday calling for all foreign troops to leave.

Caretaker Prime Minister Abdel Abdul Mahdi told the US ambassador to Baghdad the resolution must be implemented.

Friction between Iran and the United States has risen since Trump withdrew in 2018 from a nuclear deal between Iran and world powers, approved by his predecessor Barack Obama, and reimposed sanctions on Tehran slashing its vital oil exports.

The Islamic Republic said on Sunday it was dropping all limitations on its enrichment of uranium, its latest step back from commitments to the 2015 deal.

Trump’s US political rivals have challenged his decision to order the killing of Soleimani and questioned its timing in a US election year. His administration said Soleimani was planning new attacks on US interests, without giving evidence.

US Secretary of State Mike Pompeo again defended the decision at a Washington news conference on Tuesday, saying attacks allegedly planned by Soleimani “were going to lead, potentially, to the death of many more Americans”.

Pompeo also held Soleimani responsible for a Dec 27 rocket attack in Iraq in which a US civilian contractor was killed.

Trump administration officials will provide a classified briefing on developments in Iraq and Iran on Tuesday at 4pm EST (2100 GMT) for congressional leaders and Republican and Democratic leaders of the intelligence committees, House of Representatives aides said. Administration officials will provide another briefing for US senators on Wednesday.

Not just for your nan: how roses became fashion’s must-have pattern

New edition of tax guide for 2020 by PwC Cyprus