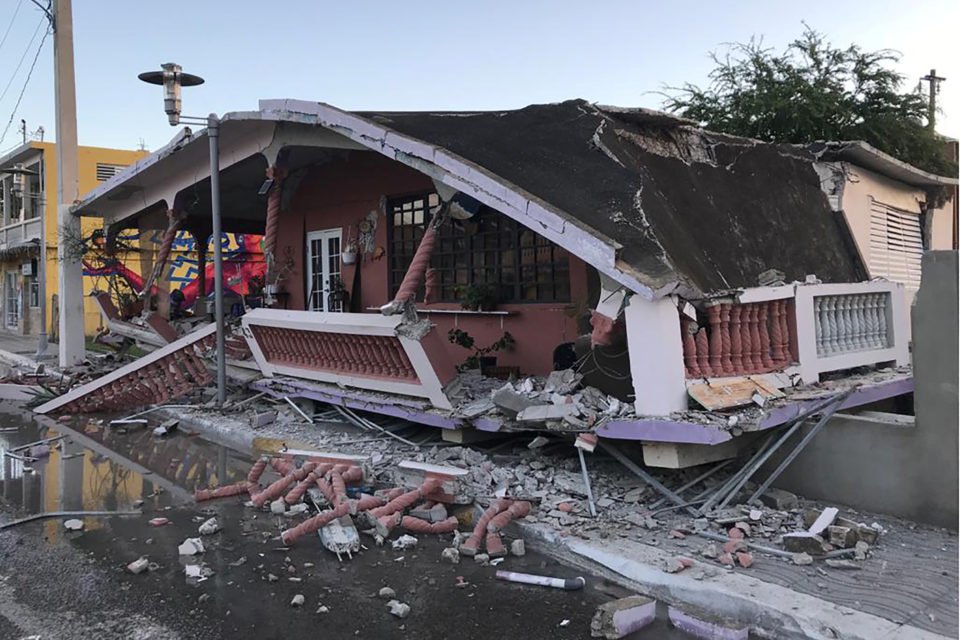 A home is seen collapsed after an earthquake in Guanica, Puerto Rico January 7, 2020. REUTERS/Ricardo Ortiz

Puerto Rico Governor Wanda Vazquez declared a state of emergency and activated the National Guard on Tuesday after a series of earthquakes including one of magnitude 6.4 struck the Caribbean island.

The temblors killed at least one person, knocked out power across much of the island and caused significant damage, authorities and media reported.

Vazquez said all public sector offices except for emergency services would remain closed on Tuesday while emergency plans were implemented. The emergency order and activation of the National Guard were later published on an official government website.

The island has been rocked by a series of quakes in recent days, including a 5.8-magnitude temblor on Monday that damaged a few homes on the southern coast.

The US territory is still recovering from a pair of devastating 2017 hurricanes that killed about 3,000 people and destroyed significant infrastructure across an island working through a bankruptcy process to restructure about $120bn of debt and pension obligations.

Vazquez, who assumed office in August after Ricardo Rossello stepped down in the face of massive street protests, tweeted pleas for people to remain calm.

“We want everyone to be safe. That is why all work in the public sectors has been suspended today, so that you can be with your family, implementing your emergency plans,” Vazquez tweeted.

The first and biggest quake on Tuesday, of magnitude 6.4, struck at a depth of 10.0km at 4:24 am (0824 GMT) near Ponce on the island’s southern coast, the US Geological Survey said.

A 73-year-old died there after a wall fell on him, newspaper El Nuevo Dia reported.

Witnesses on social media described the quake as “super strong” and lasting up to 30 seconds. It was followed by a number of hefty aftershocks including one measuring 5.8.

The impact along the country’s southern coast appeared significant.

PREPA had cut off power on safety grounds and hoped to reconnect supplies as soon as possible, it said on Twitter.

The quake severely damaged the Immaculate Conception church in Guayanilla, leaving about half of it standing and surrounded by piles of rubble, according to video posted by Wapa TV. A picture published by El Nuevo Dia showed people removing artifacts.

“Persons along coastal areas near the earthquake should be observant and exercise normal caution, otherwise no action is required,” the PTWC said in its warning.

Monday’s quake off southern Puerto Rico knocked several houses off their supporting pillars in Guanica and Guayanilla, crushing vehicles beneath them.

That quake also destroyed the Window of the Caribbean, a rock formation on a beach that had been a tourist attraction, but there were no reports of injuries.

Moves expected over visas for travel to the US