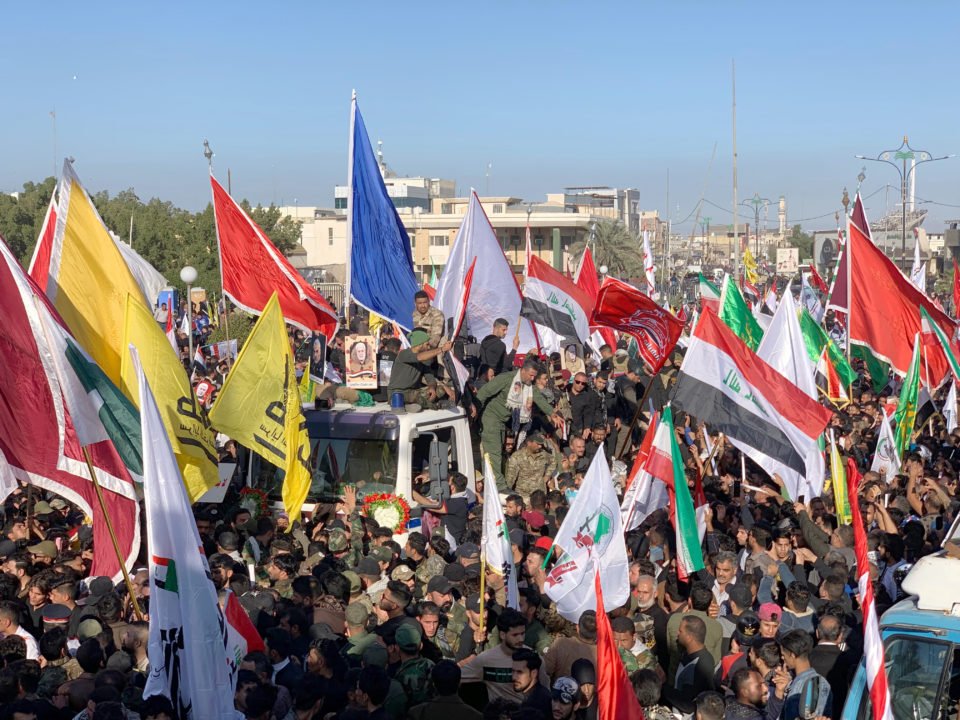 Thousands of Iraqis packed the streets of the southern city of Basra on Tuesday to mourn Iranian-backed militia leader Jamal Jaafar Ibrahimi, known by his nom de guerre Abu Mahdi al-Muhandis, who was killed by a US air strike last week.

His body arrived at his hometown of Basra following several funeral processions elsewhere in Iraq and Iran. It will be taken to the Shi’ite holy city of Najaf for burial following this final procession.

A US drone strike on Friday at Baghdad airport killed Iranian general Qassem Soleimani, who oversaw Tehran’s campaign to extend its influence across the region, and Muhandis in an attack that has raised concern of a wider conflict in the Middle East.

Muhandis was the top Iraqi adviser to Soleimani, commander of Iran’s Qods Force which supports many Iraqi militia groups such as Kataib Hezbollah, which was founded by Muhandis in 2003 after the US-led invasion.

His death means Iran will have a harder time controlling its militia allies in Iraq, analysts say. Both the near-mythical status he had among these groups and the close personal relationship he had with Soleimani will be hard to replace.

About 30,000 people thronged the streets of Basra waving Iraqi and militia flags and denouncing the United States. Chants of “No, no America” and “No, no Israel” rang out.

“We will avenge Abu Mahdi al-Muhandis and Soleimani by forcing American troops to leave Iraq,” said Shi’ite cleric Muhsin al-Hakeem who stood by the convoy carrying the commander’s casket.

Muhandis fought for decades with Soleimani and other prominent Iraqi militia leaders such as Badr Organization chief Hadi al-Amiri, now the most likely candidate to succeed him.

Together they fought on Iran’s side against Saddam Hussein in the Iraqi-Iran war in the 1980s. He also worked with Iran’s Islamic Revolutionary Guard Corps (IRGC) whilst in Kuwait, organising attacks on embassies there of countries that supported Saddam during that war.

In a video will he left to be shared after his death, Muhandis called on his supporters to “perpetuate jihad”.

“I pray I spend the afterlife with…those I fought with, from Kuwait, to Iran, to Iraq. The Badr youth, and later the resistance against the occupation, and now the PMF youth.”

He was a prime example of the regional network of Shi’ite militias Soleimani had been building over decades in Iraq, Syria, and Lebanon.

“I command you to take care of the Shi’ites in the region and in the world,” he told his followers. “Obey the Imam of the Umma Sayyid Khamenei,” he added, referring to Iranian Supreme Leader Ayatolla Ali Khamenei.

The U.S. air strike that killed him and Soleimani created a wider backlash among Iraqis and promoted parliament to pass a resolution on Sunday calling for an end to all foreign troop presence, reflecting the fears that the strike could engulf Iraq in another war between two bigger powers.

Have you seen this man?

Italy and France to join trilateral in Cairo on Wednesday