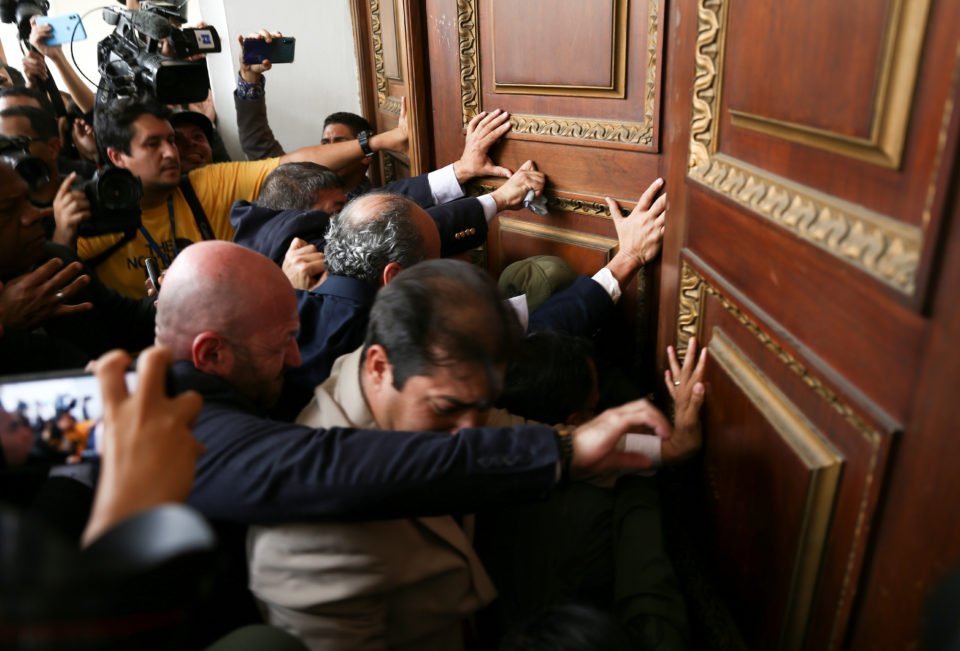 Venezuelan legislative chief Juan Guaido on Tuesday entered the congressional palace following a tense standoff with security forces at the entrance, after the ruling socialist party on Sunday installed a rival parliamentary leadership.

Guaido had pledged to attempt to preside over Tuesday’s session anyway. Local television images showed Guaido arguing for half an hour with troops who blocked the entrance to the legislative building but eventually allowed him and a handful of allied lawmakers to pass.

But inside, a brief session led by Luis Parra – who was sworn in by allies of President Nicolas Maduro as parliament chief on Sunday – had already ended, according to Reuters witnesses.

Parra’s swearing in on Sunday gave Maduro sway over the last major state institution that had remained outside his control and appeared to mark a setback to Washington’s efforts to unseat him.

Parra, who was elected to congress in 2015, had been expelled from the First Justice opposition party in late 2019 due to corruption allegations, which he has denied.

Dozens of countries, including the United States, denounced Parra’s appointment as illegitimate, and said they continued to recognise Guaido as the parliament’s head and as Venezuela‘s rightful president.

On Sunday, soldiers with riot shields blocked Guaido from entering parliament for what was expected to be his re-election. After Parra’s swearing-in, Guaido held a separate session elsewhere in which 100 lawmakers backed his bid. The legislature has 167 seats.

Guaido has vowed to preside over Tuesday’s legislative session despite what he called Parra’s “parliamentary coup.”

Parra has rejected that description and said in a post on Twitter: “We came to save parliament from destruction.”

Guaido was elected head of the congress in January 2019 and invoked Venezuela‘s constitution to assume an interim presidency, denouncing Maduro as a usurper who had secured re-election in a 2018 vote widely considered fraudulent.

So far, Maduro has fended off Guaido’s challenge, retaining control of the armed forces and tightening the noose around opposition lawmakers. More than 30 of Guaido’s congressional allies are in hiding, in prison, or in exile.

Parra’s new policy agenda focuses on reducing conflict with the government. Maduro was quick to celebrate his swearing-in, highlighting a “rebellion” among opposition lawmakers.

Parra said on Monday his priority was to set up a new electoral council to preside over free and fair elections.

Tuesday’s session, he said, would debate proposals to tackle widespread shortages of gasoline, the freedom of political prisoners, and increases to workers’ salaries. The session began around 10am local time (1400 GMT) and had ended before 11am.