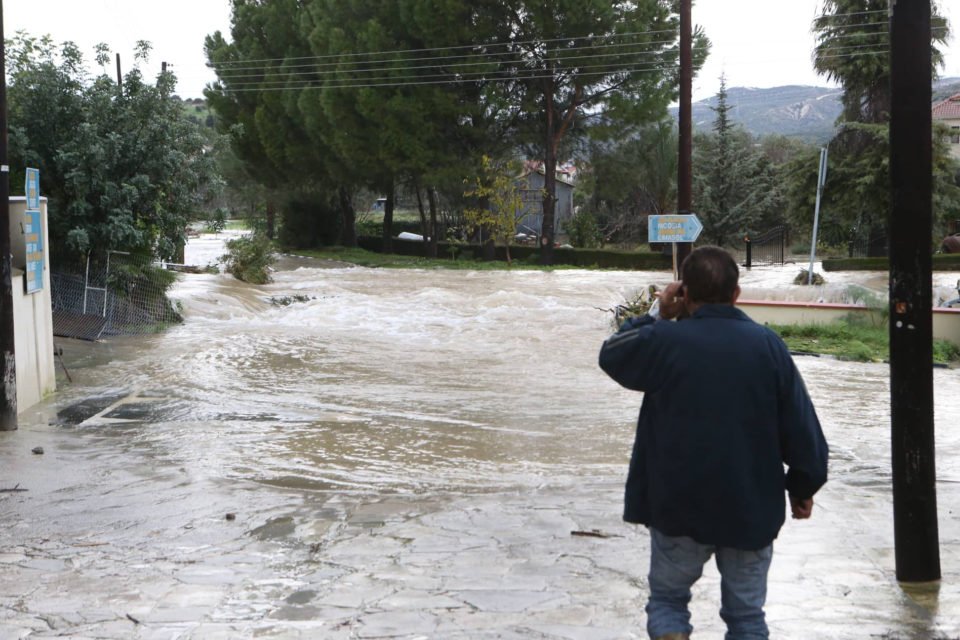 The island’s dams have never overflowed so early in the year, the Water Development Department said on Wednesday as two more of the largest reservoirs reached full capacity and water flooded over the dam walls.

Kouris and Evretou reservoirs overflowed between Tuesday and Wednesday while Kalavassos residents woke up to find a river where a road had been and more than 10 homes had to be evacuated.

Τhe Polemidia reservoir overflowed on Wednesday for the second year in the row.

According to senior engineer at the WDD Marios Hadjicostis this is the first time that water reserves have been so high in January, forcing dam after dam to overflow. This is down to a combination of factors: the heavy rainfall this year, but also the existing high water levels at the start of the rainy season in October.

“Usually the dams overflow around March or April but this year because of the high water reserves due to last year’s rainfall we had overflows in January,” Hadjicostis told the Cyprus News Agency.

He added that water levels in reservoirs were already at their highest ever January figure, over 96 per cent full with that figure set to reach 99 per cent.

Kalavasos residents were among thousands suffering real problems after weeks of heavy rain.

On Wednesday they woke up to find a river where a road had been after heavy rainfall on Tuesday resulted in the flooding of several streets in the village.

This is only the second time in 50 years so much water has flooded onto the road, residents of the area said after the Kalavassos reservoir overflowed on January 6.

The last time there was that much water on the road was before the reservoir was built, one of them said. A similar event took place 35 years ago but not to the same extent.

“The road will not empty until March or at least late in February,” a resident said. “Now that the dam has overflowed water will continue to come down from the hills even if the rain stops.

“This used to be a river and the river is making its normal way down to the sea.”

The reservoir overflow also caused the collapse of the support wall of the village’s ring road. Around 12 houses built on that road were evacuated since they had no water or electricity.

Authorities said they were waiting for the water level to drop before they could restore the damage.

Larnaca district officer Odysseas Hadjistefanou said that five families had chosen to remain in their homes even without electricity and water despite efforts to convince them to move from them.

Kalavasos community leader Lefteris Foka said the water level had slightly dropped and crews of the electricity authority (EAC) were working on restoring the damage.

The reservoirs of Kouris, Evretou and Polemidia overflowed during the past 24 hours with only four to five big ones still not yet reaching full capacity, Hadjicostis said.

Kouris reservoir, the largest in Cyprus, overflowed for only the third time since its construction in 1988 at around midnight on Tuesday night.

The reservoir, which has a capacity of 115 million cubic metres of water, overflowed for the first time on March 4, 2004, and it took eight years for it to happen again on April 6, 2012.

Eight years later, many residents watched as it happened again, and it is expected that many more will visit in the coming days.

Last year at the same time, the reservoir was just 17.4 per cent full.

In the early hours of Wednesday the Evretou dam in the Paphos area near Polis Chrysochous also overflowed.

Evretou is the third largest reservoir and has a capacity of 24 million cubic metres of water. Built in 1986, it last filled in April 2019 and before that in January 2012.

It is the sixth reservoir to reach capacity in the Paphos district after Pomos, Argakas, Asprokremmos, Arminou and Kannaviou as heavy rain has hit Paphos in particular.

The road from Polis Chysochous hospital to the camping site had to be closed as a precaution and the Paphos fire service was called to help with rain related incidents five times between Tuesday and Wednesday.

Police are urging drivers to be careful as branches, stones and other debris have been transported by torrents of water in the area and have accumulated on and next to roads.

Storm Lydia left serious problems behind it on potato crops, especially in the areas of free Famagusta and Larnaca. Producers said 80 per cent of their produce has been destroyed.

In the north too, several problems were observed due to the bad weather conditions, with ‘civil servants’ told to leave three hours earlier on Wednesday. Schools will remain closed on Thursday, while flooded roads led to the closure of several roads, mainly in Nicosia.

Ingredients we’ve become obsessed with over the last decade