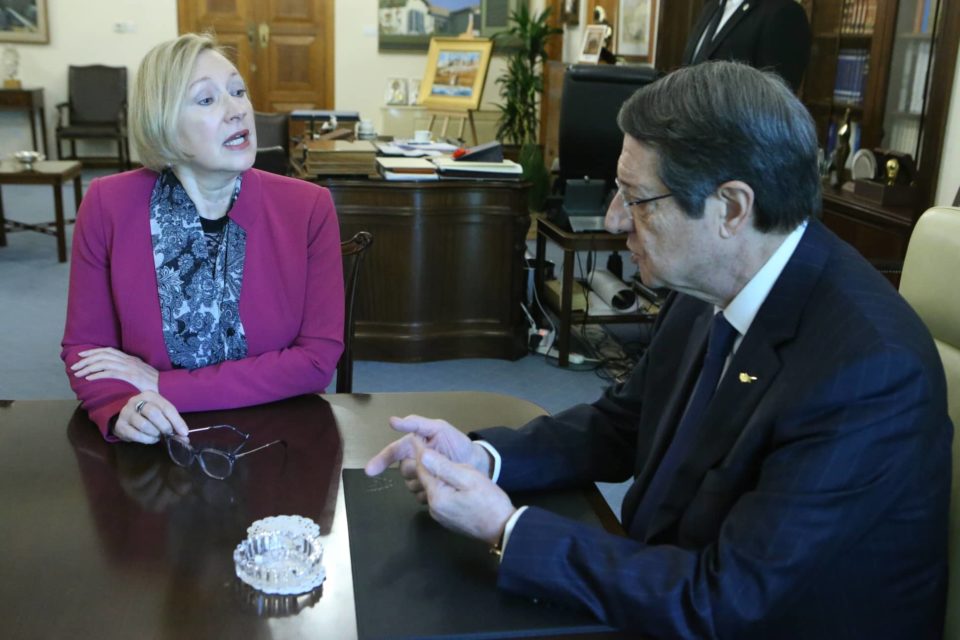 President Nicos Anastasiades said on Thursday he believed the report on the UN force in Cyprus would contain important events justifying renewal of its mandate.

“I believe it would at least include important events affecting the situation in Cyprus and which fully justify the peacekeeping force remaining in Cyprus,” the president said after a meeting with UN special representative Elizabeth Spehar who also met Turkish Cypriot leader Mustafa Akinci later in the day.

Anastasiades said it was a useful and constructive meeting that focused on the current goings-on in Cyprus ahead of the decision on the renewal of the peacekeeping force’s mandate.

“I raised certain issues, which of course must be included in the report so as to have objectivity as regards the events and the state of play,” the president said.

Spehar said she will be leaving for the United States next Saturday, adding that there will be a Security Council session coming up soon on Unficyp, based on the secretary-general’s report, that is scheduled presently for January 20.

“The secretary-general’s report should be out in the next couple of days.”

The UN official added that first she will be going to Washington “to touch base with officials at the State Department, as well as in Congress, and the National Security Council,” and afterwards in New York where she will meet “with senior UN officials, as well as Security Council members, and also member states who are troop contributors or police contributors to Unficyp.”

Asked if there are any developments with regard to the efforts for a solution to the Cyprus problem, following the Berlin trilateral meeting, she said “no updates for the moment”.

During the meeting in the north, Akinci stressed the importance of including the issue of political equality in the UN report.

A statement issued after the one-hour meeting said that the Turkish Cypriot leader had also highlighted the need to include the importance of dialogue in resolving the situation in the eastern Mediterranean, including a Turkish Cypriot proposal submitted last July on natural gas.

The proposal involves the establishment of a joint committee under the supervision of the UN which would have the same number of members from both sides, and an independent observer.

Anastasiades dismissed the idea, arguing that such a commission could not get involved in managing the sovereign rights of the Republic of Cyprus.

He did counter-propose establishing an escrow account that would secure the Turkish Cypriot share of gas revenues, but only on the precondition that Turkey acknowledged Cyprus’ Exclusive Economic Zone.

It would also presume that Turkey ceased its drilling activity within Cyprus waters.

The president’s proposal foresees the creation of a bank account linked to the hydrocarbon fund, to which the Turkish Cypriot share from natural gas revenues, expected to be around 30 per cent, will flow into.