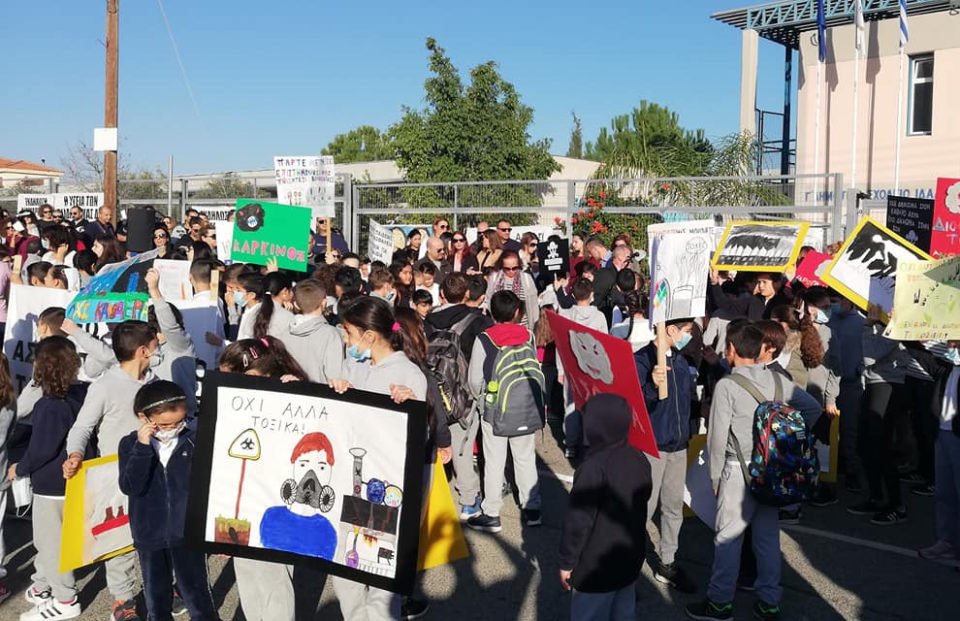 File photo of an earlier Protest outside the school

Dali primary school teachers, parents, and pupils have demanded to be transferred to other schools citing the pollution in the area caused by two asphalt plants.

Kyriakos Kyriakou, chairman of the school’s parents’ association, told the Cyprus Mail on Friday a letter was sent to all parents this week to inform them about their right to transfer their children to other schools.

The decision was taken last Tuesday during a meeting that discussed the effects of air pollution in the area.

The school is surrounded by five industrial zones but the main problem appears to be the production of asphalt.

“Thousands of chemicals are released when manufacturing asphalt with fuel oil, and science tells us they can cause different types of cancer,” Kyriakou said.

“The only way for the problem to be resolved is for the two asphalt plants to relocate.”

Kyriakou added that some parents have complained about their children having breathing problems.

The Parents’ association will gather all signed letters from the parents who wish to transfer their children in September and sent them to the ministry of education by the end of January.

“We just want to protect the health of our children,” Kyriakou said.

Eliada Evripidou, a teacher at Dali primary school confirmed that some teachers have also asked to be transferred to different schools.

“Pupils often ask to stay in class during breaks,” said Evripidou, who is also a mother of a second class student at the primary school.

Many times, physical education teachers decide not to take the children out to exercise because of the intense air pollution, she said.

“My child often suffers from bronchitis, while many students and teachers experience coughs and red and watery eyes because of the air pollution,” the teacher said.

Area residents have complained about the intense smell at least three times per week, while there are days locals cannot open their windows to breathe fresh air, they told the Cyprus Mail.

In protest, parents kept their children out of school for a day on December 17, while on November 19 students and teachers abstained from class for one hour.

A committee with representatives from four different ministries was tasked last October to discuss the possibility of relocation with the owners of the plants.