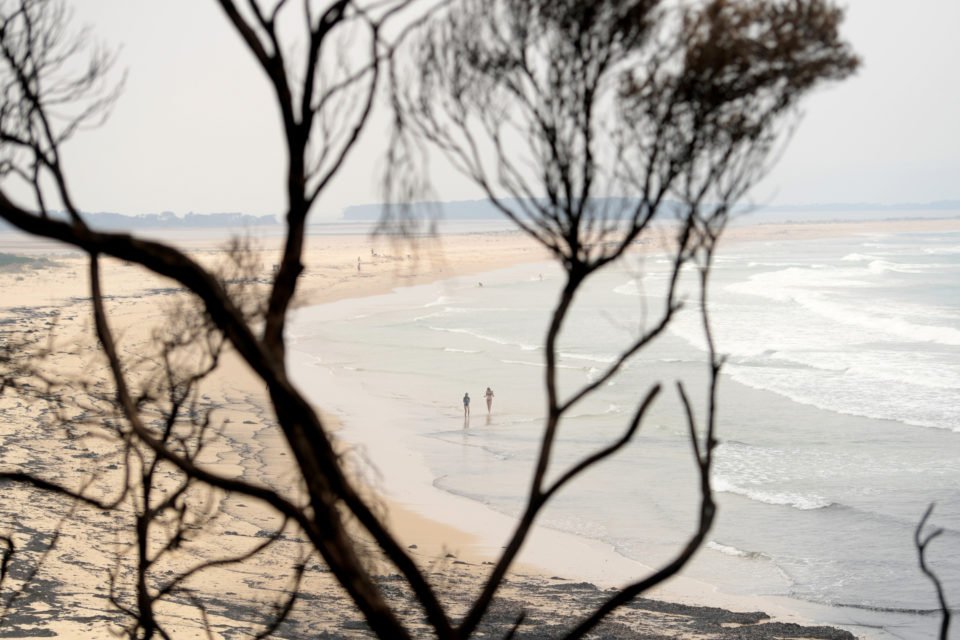 Girls walks past ash washed up on a beach where people had previously taken shelter during a fire on New Year's Eve in Mallacoota, Australia January 10, 2020. REUTERS/Tracey Nearmy

Australia urged nearly a quarter of a million people to evacuate their homes on Friday and prepared military backup as soaring temperatures and erratic winds fanned bushfires across the east coast.

Fire conditions are expected to become extreme later in the day in several places, accompanied by high winds, threatening to further fuel flames that have already left thousands homeless.

In the alpine region on the border of the southeastern states of Victoria and New South Wales, two fires were poised to merge and create a blaze over almost 600,000 hectares (1.5 million acres).

“With so much fire in the landscape, we are going to continue to see fires getting a run on, fires flaring up, for weeks to come,” Daniel Andrews, the premier of Victoria, told a televised briefing.

“Even with rain in Melbourne, even with forecast better conditions next week, there is a long way to go in what has been an unprecedented fire event…and, of course, we know that we have many weeks of the fire season to run.”

He urged residents to stay on high alert and leave the community “if you are told to”.

Authorities sent emergency texts to 240,000 people in Victoria, telling them to leave. People in high-risk regions in New South Wales and South Australia were also urged to think about leaving, but officials did not say how many.

Authorities said conditions would continue to deteriorate across Victoria as heavy winds whip the state, grounding military helicopters that had been helping with evacuations and supply drops.

Since October, 27 people have been killed and thousands subjected to repeat evacuations as monster and unpredictable fires scorched more than 10.3 million hectares (25.5 million acres) of land, or an area the size of South Korea.

Emergency services minister Lisa Neville said some communities had been provided with large containers of satellite phones, baby formula, food, nappies, and torches in case they are cut off.

Campaigners protested in Sydney and Melbourne on Friday as part of a wave of demonstrations planned in major world cities, to spotlight concerns about Australia’s climate change policies.

Following are some highlights of what is happening in the bushfire crisis:

* There were 149 fires ablaze across New South Wales (NSW), with around 50 uncontained on Friday. All other fires were at the “advice” level, the lowest alert rating.

* Victoria state had 18 fires, three of which were so severe that evacuation orders have been issued. Two more fires are at an emergency level.

* The Insurance Council of Australia increased its estimate for damages claims from the fires to more than A$900 million on Friday, with claims expected to jump further.

* Australia’s wildfires have dwarfed other catastrophic blazes around the world. Combining 2019 fires in California, Brazil and Indonesia still amounts to less than half the burnt area in Australia.

* In South Australia state, nine fires were ablaze, one of which was at a emergency level.

* Climate protests were planned for Friday in several cities, including Melbourne, Sydney and Canberra, targeting the Australian government handling of the crisis and its position on climate change.

* Prime Minister Morrison said on Friday he was considering holding a wide-ranging national inquiry into the bushfires after the immediate crisis had passed.

* NSW authorities said just shy of 2,000 homes have been destroyed in the state, half of those in the past 10 days.

* The Commonwealth Bank of Australia said it would donate cricketer Shane Warne’s prized “baggy green” cap to a museum after paying more than A$1 million for it at an auction for bushfire relief efforts.

* Authorities have warned that the huge fires, spurred by high temperatures, wind and a three-year drought, will persist until there is substantial rainfall. The weather agency said there was no sign of that for months.

* Ecologists at the University of Sydney have estimated 1 billion animals have been killed or injured in the bushfires, potentially destroying ecosystems.

* Moody’s Analytics said the cost of the fires could easily surpass that of deadly 2009 Black Saturday fires that destroyed 450,000 hectares (1.1 million acres)of land, which cost an estimated A$4.4 billion.

* About 100 firefighters from the United States and Canada are helping with another 140 expected in coming weeks.

* Smoke has drifted across the Pacific, affecting cities in South America, and may have reached the Antarctic, the U.N. World Meteorological Organization said.

Our View: Minister right to warn of drought in times of plenty