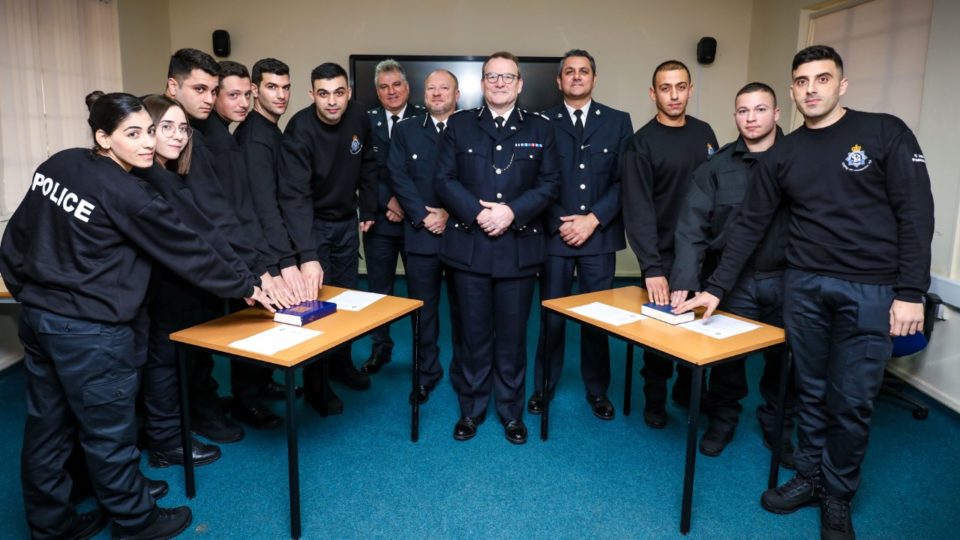 The first tranche of 30 new Sovereign Base Area Police recruits were sworn in on Tuesday morning with the officers now ready to begin two years of intense education in the field of law enforcement.

Before the 12 Greek Cypriots and three Turkish Cypriots took the oath, the chief constable paid tribute to their outstanding efforts, which saw them undergo eight different assessments over a ten-month period.

He said: “Firstly, I would like to offer my congratulations to every one of you and I would like to welcome you into the SBA Police family.
“When we started this process back in March last year, we had more than 500 people apply for the positions and we took only the very best applicants.

“The job of a police officer is extremely demanding but also very rewarding. Daily, police officers get to experience what most people only ever see through their TV screens. Police officers head towards danger when others head away from it in order to protect the most vulnerable.

“The swearing in of new recruits, all from different communities and backgrounds, will enhance this already great police force and having worked as a police officer for 35 years myself, I can say it is both exciting and rewarding.”

SBA Police Chief of Staff, Chief Inspector Maria Atalioti, who headed-up the recruitment process, explained why the assessments were so demanding.
She said: “It was an extremely difficult and challenging process but this was clearly aimed to allow us to identify only the very best and most suitable people for the job.

“Throughout, it was done with fairness, integrity and transparency and we are delighted to welcome those successful candidates into our SBA Police force.”

Greek Cypriot 22-year-old Elizabeth Nicolaou, speaking after swearing the oath, revealed she was fulfilling a life-long dream in becoming a police officer, saying: “I finished school in 2015 and I went to Cardiff to study police sciences and I finished last summer.

“It was my dream to work as a police officer and it has been an amazing process, difficult but amazing. I don’t want to sit in an office, I want to experience new things every day and the police offers me that. I am just so excited to get started now.”

Bertug Tekakpinar, a 27-year-old Turkish Cypriot from Nicosia, who worked in primary education before applying to the police, explained why he felt many of his skills would be transferrable: “I wanted to challenge myself further and I felt teaching and police work have similarities. I think as a teacher you deal with problems and high expectations and I think they are applicable skills that will help me now.

“I have learnt a lot over the past ten months, I up-scaled my fitness level for example, so that was very rewarding. I have met lots of new people and we will learn from each other and of course, from the training that we are now going to receive.”

Angelos Micheal, 28, who worked in sales prior to starting his career with the SBA Police, said: “You see police shows on TV and I have always been attracted to the idea, so when I saw the job advertised, I knew I wanted to give it a go.

“It feels like it was meant to be. I will give everything I have to the police force going forward and now I want to learn as much as I can to help me achieve that.”
A further 15 recruits will be sworn in later this year in May, bringing the total number of SBA Police officers serving to 241.

“Get out”: Australians flee again as heat and wind fan huge bushfires