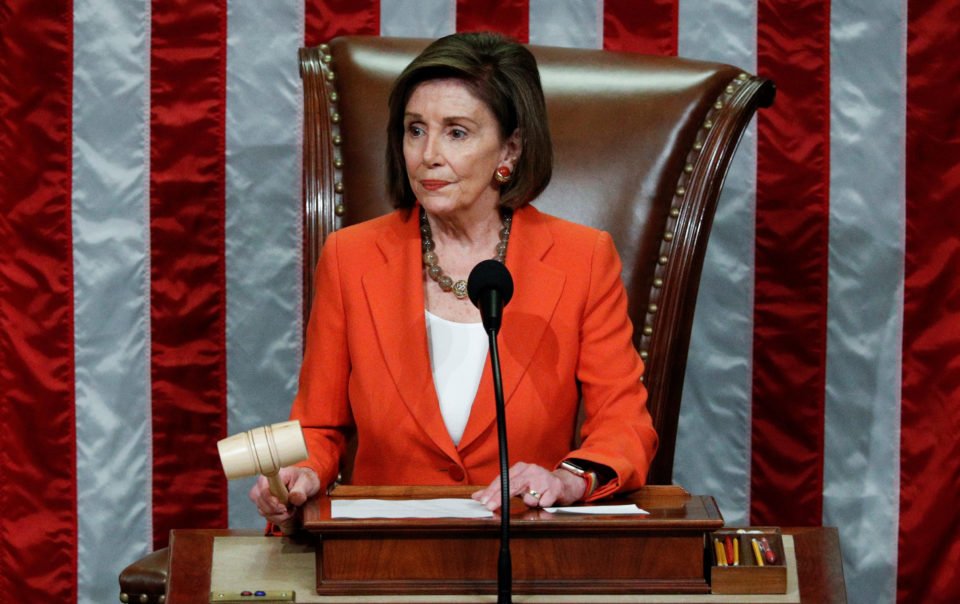 By David Morgan and Richard Cowan

The Democratic-led U.S. House of Representatives will send formal impeachment charges against President Donald Trump to the Senate as early as next week, House Speaker Nancy Pelosi said on Friday, setting the stage for his long-awaited trial.

Pelosi, the top Democrat in the House, has been engaged in a three-week cat-and-mouse game with Senate Majority Leader Mitch McConnell over the rules for Trump’s trial in the Republican-controlled Senate.

Democrats have demanded it include new witness testimony and evidence about the Republican president’s pressuring of Ukraine to probe former Vice President Joe Biden, one of the Democrats running for the right to face Trump in the November election.

McConnell effectively slammed the door shut on that idea this week when he said had enough Republican votes to start the trial without a commitment to hear from additional witnesses, including former Trump national security adviser John Bolton.

In a letter to House lawmakers on Friday, Pelosi said a resolution to appoint “managers” for the trial and to transmit the impeachment charges to the Senate could be brought up on the House floor next week.

During last month’s impeachment debate, the House adopted a rule that allows Democrats to bring up a resolution naming House managers quickly and vote on it after only 10 minutes of debate. That means the House could vote as soon as Tuesday.

Pelosi also accused McConnell of intending to “stonewall” a fair trial by backing legislation to dismiss the abuse of power and obstruction of Congress charges against Trump without a proper hearing of the evidence.

“A dismissal is a cover-up and deprives the American people of the truth,” Pelosi said, adding that she would consult with other House Democrats on how to proceed on Tuesday.

The House impeached Trump on Dec. 18 after an investigation sparked by a whistleblower’s complaint about Trump’s July 25 phone call with Ukrainian President Volodymyr Zelenskiy. A trial cannot begin until the charges, known formally as articles of impeachment, are transmitted to the Senate.

Trump says he did nothing wrong and has dismissed his impeachment as a partisan bid to undo his 2016 election win.

The trial is expected to lead to Trump’s acquittal before the 2020 presidential election campaign heats up, as no Republicans have voiced support for ousting him from office. A two-thirds majority of the Senate is needed to vote to do that.

Republicans in Congress have lambasted Pelosi‘s approach since the impeachment vote, pointing out that House Democrats claimed it was urgently important to impeach Trump before the December holiday break only to pivot to a delaying strategy.

“About time,” McConnell responded when asked about Pelosi‘s letter on Friday. McConnell, who has vowed to coordinate the trial with the White House, has said that Pelosi is not within her rights to dictate to the Senate how to conduct the trial.

A McConnell aide declined to say when a resolution spelling out the trial plan might be unveiled.

Democrats are now focusing their attention on winning over Republican Senators Mitt Romney and Lisa Murkowski as potential allies during the trial, with the hope that capturing them could spur other Republicans to abandon Trump.

Senate Minority Leader Chuck Schumer has said that Democrats would force votes during the trial to have the new witnesses, including Bolton, testify and for new evidence to be submitted.

Bolton, who was fired by Trump in September, said on Monday he was willing to testify, although the White House could object.

Other witnesses during the House impeachment investigation testified that Bolton strongly objected to an effort by Trump’s personal lawyer, Rudy Giuliani, to pressure Ukraine’s government outside of regular diplomatic channels, with one saying Bolton referred to the arrangement as a “drug deal.”

Congressional investigators believe Bolton objected to Trump’s decision to delay $390 million in military aid to Ukraine and could elaborate on that, a Senate aide told Reuters this week.