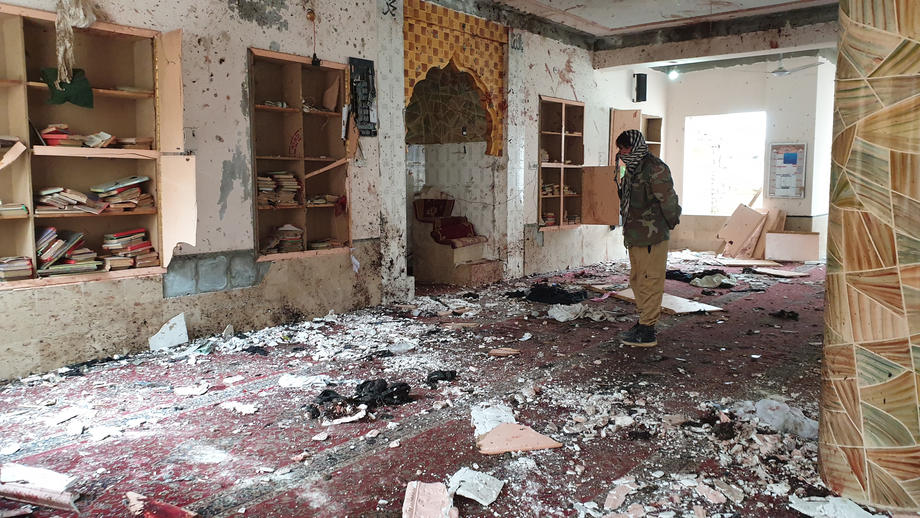 A Pakistani security official inspects the damaged done to a Mosque a day after a bomb blast that killed a police official and 15 others.

The death toll from a suicide bombing at a mosque in the southwestern Pakistani city of Quetta rose to 15 on Saturday, officials said.

The blast during Friday evening prayers wounded at least 20 other people, police said.

“Two of the wounded people died overnight in the hospital,” said provincial home minister Zia Langove, adding that six people were still in a critical condition.

Islamic State claimed its suicide bomber carried out the attack to target an Afghan Taliban seminary.

“The U.S. condemns this heinous terrorist attack in a place of worship,” Paul Jones, the U.S. ambassador to Pakistan, said in a statement. “I extend our condolences to the families of those who lost their lives.”

Mineral and gas-rich Baluchistan, of which Quetta is the capital, is at the centre of the $60 billion China-Pakistan Economic Corridor, part of China’s Belt and Road project.

But violence in the province has fuelled concerns about the security of projects such as a planned energy link from western China to Pakistan‘s southern port of Gwadar.

The attack was the second in the city this week, while police said they had foiled another by killing a suicide attacker in Rawalpindi city near Islamabad after he shot and killed two policemen.

The Taliban denied in a statement that some of its members, including a senior commander, were killed.

Local officials in Quetta’s police and district administration would not confirm whether the Dar-ul-Aloom Shariah seminary belonged to the Afghan Taliban under a state policy which denies the presence of the group on its soil.

However, two officials said on condition of anonymity that the seminary was part of the Afghan Taliban.

Baluchistan has faced an insurgency by separatist and nationalist groups who want a greater share in revenues earned from the local resources.

Islamist militants, including Islamic State which consists of splinters from local Taliban and sectarian groups, also have a strong presence in the region.