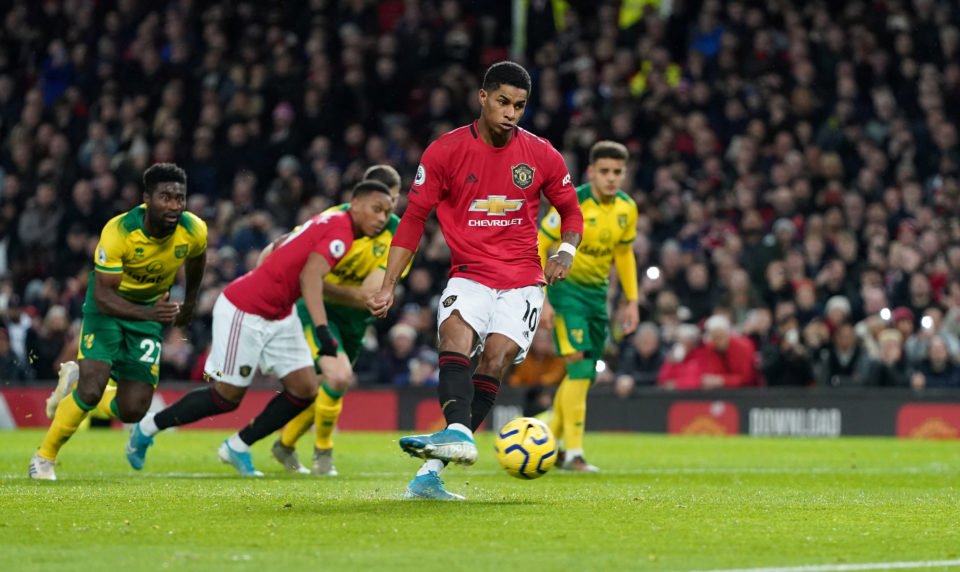 Manchester United kept alive their hopes of finishing in the Premier League’s top four, with two goals from Marcus Rashford and one each from Anthony Martial and Mason Greenwood giving them a 4-0 home win over Norwich City on Saturday.

The result left United fifth in the standings on 34 points from 22 games, five behind fourth-placed Chelsea, while Norwich stayed rooted to the bottom with 14 points.

Midfielder Juan Mata enjoyed a rare league start for United and made the most of it as he contributed with two assists, the first when Rashford met the Spaniard’s inswinging cross at the far post and side-footed it home in the 27th minute.

Rashford made it 2-0 with a 52nd-minute penalty as he drove his spot-kick low past goalkeeper Tim Krul, who had needlessly hauled down United’s left back Brandon Williams with a mistimed tackle.

The lively Mata was at it again two minutes later when he delivered an inch-perfect cross from the right for Martial to head home emphatically into the bottom corner from close range.

Second-half substitute Greenwood put the icing on the cake for the home side with a crisp low shot from 18 metres shortly after he came on for Andreas Pereira.

Elsewhere, Chelsea made amends for some recent poor home form on Saturday, thumping Burnley 3-0 with goals from Jorginho, Tammy Abraham and Callum Hudson-Odoi’s first in the Premier League.

The home side looked sharp from the kickoff and earned a penalty in the 26th minute when Matthew Lowton caught Willian’s legs as the Brazilian raced down the left. Brazilian born Italian Jorginho sent Nick Pope the wrong way from the spot.

Chelsea top scorer Abraham headed Chelsea’s second from a Reece James cross, the ball slipping through Pope’s hands on the way into the net.

Abraham’s fellow youth-team graduate Hudson-Odoi made it three home goals for Chelsea for the first time in the league this season when he poked in from a cross by captain Cesar Azpilicueta four minutes after the break.

Burnley had enjoyed a couple of bright moments in the first half. Jeff Hendrick put the ball in the net in the 18th minute but captain Ben Mee was marginally offside in the build-up. Mee came close in the 36th minute but Ross Barkley cleared his point-blank downward header off the line.

Chelsea, whose shaky home form in recent weeks included defeats by West Ham United, Bournemouth and Southampton, strengthened their grip on fourth place with the win, notching 39 points from 22 games. It was the fourth Premier League defeat in a row for Burnley, who lie 15th.

Finally, Brendan Rodgers’ Everton lost 2-1 to Southampton at home, Ancelotti’s Everton beat Brighton 1-0 thanks to a goal scored by Richarlison in the 38th minute and Wolverhampton drew 1-1 with Newcastle at home.

Paphos municipality on a mission to change old town image

Only the title interests me, not records, says Klopp