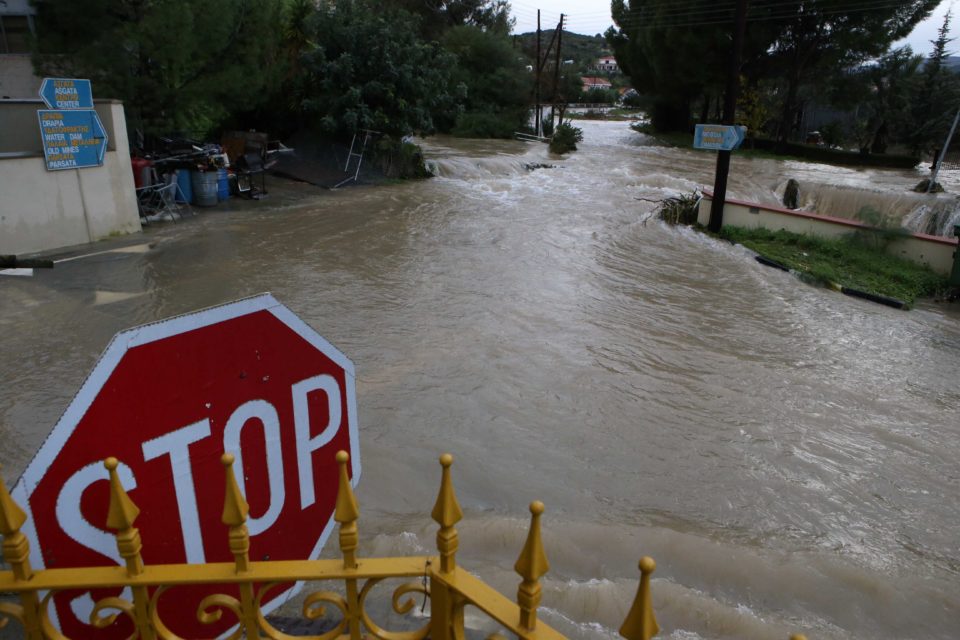 The recent heavy rains have caused serious problems island wide, but they could also provide an opportunity to fight desertification and make us reassess our recent reliance on desalination, experts have said.

With most dams now overflowing and after days of heavy rain, it has become clear that the rainfall is not solely a cause for joy. Torrents of water have swept away rocks, stones and other materials, leaving crevices where land used to be, and causing landslides and flooding.

The overflow of the Kalavasos dam has led to streams of water flowing down on what used to be a road a day earlier.

The reservoir overflow has also caused the collapse of the support wall of the village’s ring road. Around 12 houses built on that road had to be evacuated since they had no water or electricity.

In Limassol, many areas, including the castle square, were flooded and mayor Nicos Nicolaides commented that the volumes of water coming down could only be contained by major works which will take years to complete.

Ironically the plentiful rains even led to some people being without water. The Limassol water board announced that parts of the town were without water on Wednesday after the supply pipe was damaged as a result of the Yermasoyia dam overflow.

In the Paphos district the heavy rains caused a section of the busy Paphos-Polis Chrysochous road near Giolou village to cave in causing huge disruption to thousands of residents.

The civil defence department which has a long history of helping in areas affected by severe weather cites a number of reasons for the problems.

“First of all, we are in the middle of a climate crisis, not just climate change and we can expect adverse weather conditions in future,” senior officer of the civil defence Nicholas Paris said.

“There are also legal and illegal interventions into the protection zone of rivers. They are private properties and it is not easy to stop the owners from building.”

Since the building of the reservoirs which captured the water that once seasonally flowed in the river beds, many owners of plots nearby have built on them.

Head of the Water Development Department Marios Hadjicostis told the Sunday Mail most of the immediate problems are over – for now.

“The rains will stop now; it is not expected to rain during the next few days, but much depends on how the weather will be after that,” he said.

“This is the first year we have such a lot of rain so early on. If it rains a lot in February and March we will have much more flooding and landslides.”

He said there is no danger of a general groundwater flooding, but some areas around rivers are saturated with water, and this creates problems. Like Paris, he referred to the buildings near rivers.

“Most of the buildings were built without a licence,” he commented, “they would not have received a licence so close to the rivers.”

Not only were buildings flooded, but it was reported that 80 per cent of the potato crop in the Famagusta region was lost, and orchards in several areas were under water as well.

There are solutions however – both short-term and long-term.

Larnaca district officer Odysseas Hadjistefanou has described how the Kamares area had faced serious flooding in previous years, but since a number of openings to the salt lakes have been made, the water flows towards these now and does not build up.

On Thursday spaces under two bridges were opened so the water in Kalavasos could flow freely, and the district administration is working with the water development department on opening the dams gradually before they can overflow, so that the water will flow slowly instead of gushing down.

Conservationists do not dwell on the problems, but on the contrary say the plentiful rain presents a golden opportunity to save the island from desertification, if only a few simple steps are followed.

“The excess rainwater is very useful,” commented Luke Antony Louka, director of operations at the Food Web school, an organisation which aims to empower individuals to regenerate soils in their communities.

“Instead of having a small number of large reservoirs, Cyprus needs a large number of small reservoirs. They can easily take the overflow from existing dams and other catchment areas and divert it to create small lakes,” he said.

“Experts in the field of watershed restoration have demonstrated that arid landscapes can be regreened with simple, cost-effective techniques. The current excess rainfall is a golden opportunity to regreen Cyprus and to halt the desertification of this beautiful island. Maybe this will be our last opportunity, as climate change accelerates.”

Should the abundance of rain also provide an opportunity to do without the expensive desalination plants, at least for a while?

The 2008 drought led to the building of four desalination plants which, working at maximum capacity, can produce a total of 220,000 cubic metres of water daily, covering the supply needs of Nicosia, Limassol, Larnaca and Famagusta.

Though the dams are overflowing, some desalination plants are still working, Hadjicostis said. Two of them, the Larnaca and Dekelia plants, are running at 50 per cent of capacity.

“The reason is that even with all the water in the dams, there is not enough potable water for the population in all the towns,” he commented.

The Green party which has in the past been very critical of the unplanned, environmentally unsustainable, and unmonitored way desalination plants are used in Cyprus, believes the situation needs to be reevaluated.

“The issue of desalination plants continuing operations despite the obvious abundance of drinking water in this time period needs to be revisited,” deputy head of the party Efi Xanthou told the Sunday Mail.

“The public is footing the cost for sea water to be desalinated and be sold to the Republic while the dams are full and overflowing. If it is a matter of how the tenders were issued then let’s at least change the requirements with the new call when it is issued. Sustainable usage of our water reserves and ways to reduce waste, misuse and evaporation are key factors towards combating climate change,” she said.

“This is a discussion that is way overdue.”

Too much rain, too early

Rainfall has been above average so far this winter but the exceptional situation stems from the fact that reservoirs were already much fuller than usual at the start of the season due to a very wet winter in 2018/2019.

Rainfall reached 128 mm or 120 per cent of normal from January 1 to January 10, according to preliminary data released by the met department.

According to the data, from October 1, 2019 until the morning of January 10, 2020, total rainfall amounted to 407.2 mm, representing 139 per cent of the normal amount of rainfall for the same period.

In comparison, during the whole 2017-2018 rainy season the amount which flowed into the reservoir was less than 45 mcm.

At the end of this week, only six small reservoirs were not filled to capacity: Lefkara, Dipotamos, Achna, Mavrokolympos, Vyzakia and Ayia Marina.

The total amount of water accumulated was 283 mcm.

Tales from the Coffeeshop: Flooded with water and good news

Sexual conduct is a private passion