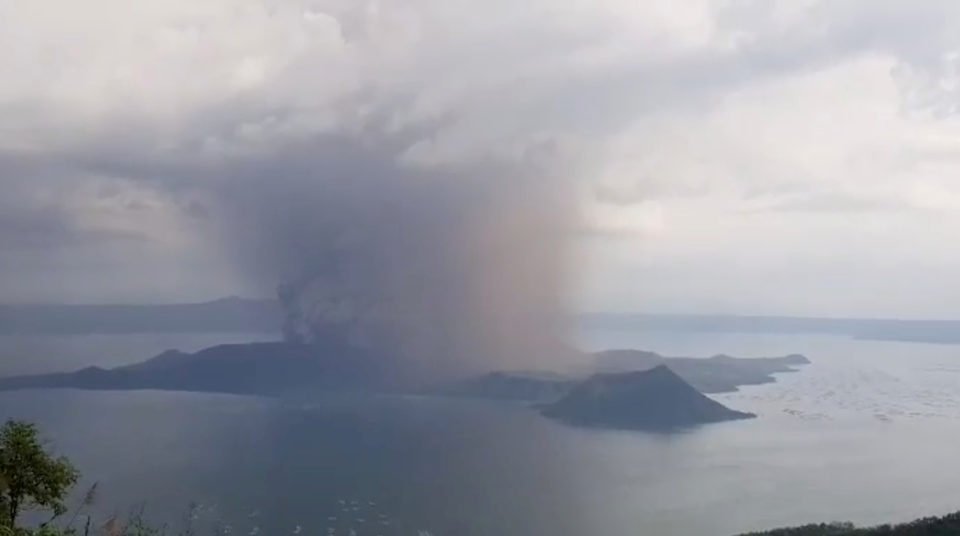 A volcano near the Philippines capital spewed ash up to 15 km (nine miles) into the sky on Sunday, prompting the evacuation of thousands of people, the cancellation of flights and warnings of a possible explosive eruption and volcanic tsunami.

Taal volcano, one of the country’s most active, is in the middle of a lake about 70 km (45 miles) south of the centre of the capital, Manila. As tremors shook the area, volcanic lightning flickered in the column of steam and ash.

The Philippine Institute of Volcanology and Seismology (Phivolcs) raised its alert level to 4 out of 5 – meaning “hazardous explosive eruption is possible within hours to days”.

Phivolcs also warned of possible hazards of a volcanic tsunami and rapid currents of hot gas and volcanic matter that could hit areas around the Taal lake, a popular weekend getaway from Manila.

Evacuation of about 8,000 residents of the volcano island and other high-risk towns is underway, with about 6,000 already out of the danger zone as of early Sunday evening, the National Disaster Risk Reduction and Management Council told reporters.

Ash fell as far away as Manila, prompting the suspension of flights at the capital’s busy international airport. General Manager Ed Monreal said the suspension would continue into Monday because there was ash on the runway.

President Rodrigo Duterte had instructed authorities to move people within the perimeter of Taal out of the danger zone, his spokesman said in a statement.

The ash plume was clearly visible from the nearby city of Tagaytay, a well-frequented viewing spot for the volcano.

“We were having lunch when we heard rumbling. We saw the volcano erupting. It rained and some small pebbles fell to the ground,” Jon Patrick Yen, a restaurant customer in Tagaytay, told Reuters.

“I did not expect to see such spectacle. We just went by to eat.”

Loyalties to empire during the Great War