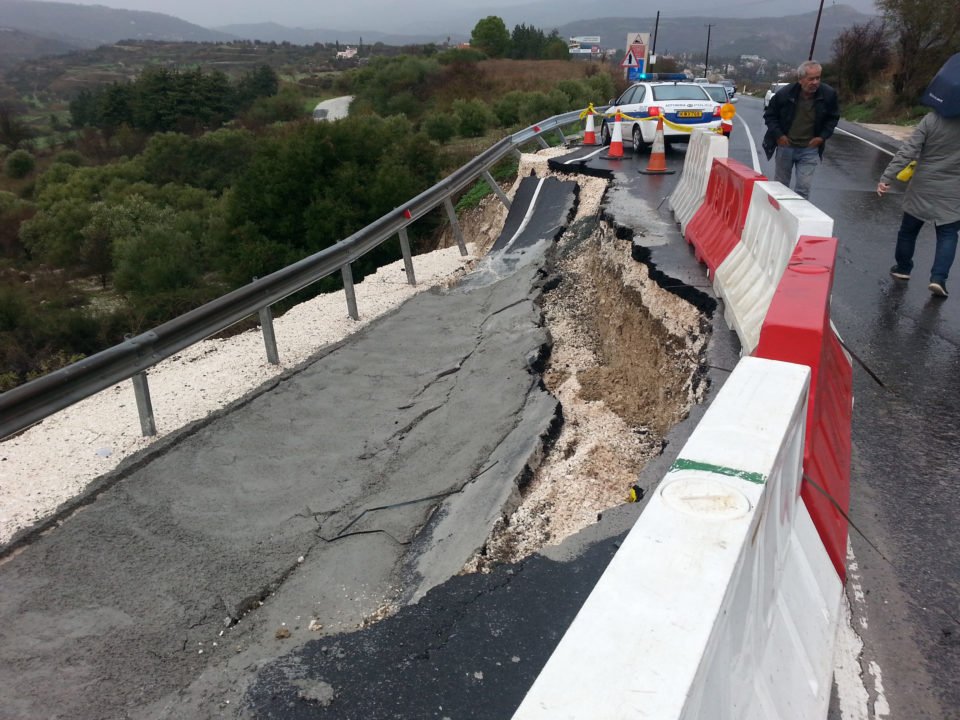 A medical emergency on Friday highlighted the absurdity of the authorities’ demand that a section of the main Paphos to Polis road which collapsed following the heavy rains remain closed for two months, a local official has said.

Only strong protests by residents of Giolou village and the surrounding area this week ensured this would not happen and a temporary road adjacent to the damaged road is being hastily constructed.

In the meantime the collapsed section of the main road is closed to traffic and the journey from Polis to Paphos is only possible via a long detour adding up to 40 minutes to the trip.

Sylvia Antoniou, secretary of Giolou community board, described an incident on Friday which explains why the temporary road, due to be ready next week, is so crucial.

“In the distance, we saw an ambulance from Polis hospital travelling with an emergency patient to Paphos hospital and we ran to open the concrete blocks which are currently blocking the road to traffic, with the help of the JCB. The emergency vehicle was able to pass by. The detour that other vehicles are using now would have taken too much time,” Antoniou said.

She explained that the authorities are permitting emergency vehicles through only in certain circumstances but not heavy vehicles.

“Vehicles are able to pass in such instances, 24 hours a day, but the authorities are worried about the weight or use of heavy or many vehicles in case the road collapses further, so it is closed.”

A large crack in the Giolou section of the road first appeared on the road on New Year’s Day, and quickly widened in the heavy rain, forcing the asphalt to cave in on the side of the road next to a ravine.

“On January 6 ,the road collapsed further and I called the police, who called the relevant authorities and they came to see what was going on. These last few days have been the worst for me in 17 years as the secretary,” said Antoniou.

The Public Works Department initial response was to declare the road closed for two months while they constructed a bypass. This would have forced thousands of drivers on lengthy detours on narrow country roads through surrounding villages.

Thousands of residents in nearby villages and Polis would have been affected by the closure, and their determined protests this week prompted authorities to say they would instead construct a temporary road for immediate access.

“Work is being done on the road all through the weekend and it will be also covered in tarmac to make it hard wearing. This is because of our protests. We needed a road though, there is no way we could have driven the diversion route for two months,” she said.

The road is being built in a field next to the stretch of the affected road.

The collapsed section is the same piece of road that also had a problem last winter, and was not open to traffic until the middle of July 2019 after many months of repair, she said.

“Again, it’s the same piece of road, The authorities spent so much money for nothing and now they are having to close the road.”

Antoniou said the collapse only highlighted the need for the long-proposed, and highly controversial, new highway linking Paphos to Polis. Giolou residents firmly support its construction, she said.

The road has been planned for decades but was put on hold in the aftermath of the 2013 financial crisis. It is now back on the table with the first phase (half the highway) estimated to cost 70 million euros, not including land expropriations.

The Green party this week issued a statement denouncing the local authorities and the government for allowing the road to get in such a terrible state, but insisting a new highway was not the answer. The existing road has been poorly maintained, they argue, while all official focus has been on dreams of an unnecessary and environmentally destructive project.

“The collapse highlights the criminal incompetence and short-sighted prospect of local authorities in Paphos and those taking decisions in Nicosia,” their statement said.

“We denounce those who for decades left the road connecting Paphos with Polis Chrysochous in this wretched state in the name of the construction of the motorway, which will destroy the natural environment with tunnels and viaduct bridges.”

They said that a safe road could be constructed without incurring exorbitant costs of a new highway by widening the existing road.

“Unfortunately, the situation has left people in the area without a secure road network.”