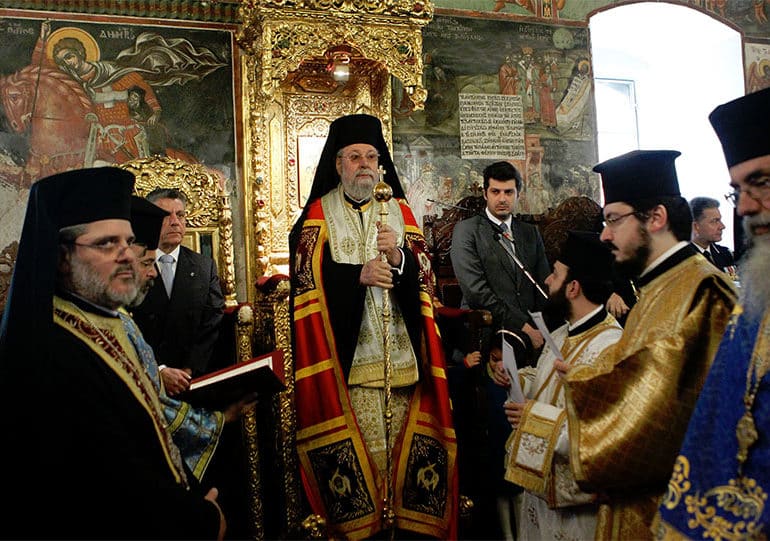 I did not want to write about high priests, patriarchs and ethnarchs again, but then by chance, the other day, I happened to watch the fantastic film The Two Popes (produced 2019, directed by Fernando Meirelles) that I am certain will win a host of awards in 2020. Circumstances often take over one’s thoughts and dictate the subject a columnist will deal with.

The story is the following: The conservative Joseph Ratzinger (Pope Benedict XVI), played wonderfully by Anthony Hopkins, and the reformist cardinal Jorge Bergoglio (now Pope Francis), played as wonderfully by Jonathan Pryce, are the top men of the Catholic Church. When Bergoglio sends his letter of resignation to Ratzinger, the latter invites the former to his summer residence where he wants to discuss everything but his resignation. The discussion that follows about the role of the Church and theology is fascinating as they have diametrically opposed views as to how theology must be interpreted.

When Ratzinger succeeded Pope John Paul II in 2005, the Catholic Church sank deeper into conservatism. Benedict XVI remained committed to the traditional views of the Church. He came under criticism for the cover-up of sexual scandals and mainly for the unwavering position of the Catholic Church against the use of contraception, which was considered of vital importance in restricting the spread of Aids in Africa. And while Bergoglio felt he had inherited a Church deep in crisis, Benedict entertained the self-delusion that he and his predecessor, John Paul II, had solved all the pending problems plaguing the Church.

It transpired that conservative clergymen, with antiquated ways of thinking such as Benedict XVI, could find common ground with other clergymen, like Bergoglio, who represents progressive values, loves football, the tango, Abba, and enjoys takeaway food such as pizza, only if they agree with the ideas of the liberals, and make way for them, as Benedict did in 2013.

Of course, every viewer will have their own interpretation. This is the beauty of a deeply thought-provoking movie. In my view, the rise of Francis to the top of the Vatican pyramid, constitutes the first seconds of a seismic change in the Catholic Church. The spectacular, all-embracing expansion of the means of communication may have been geared at the mental subjugation of the many by the few but, ironically, this expansion became a tool of knowledge and enlightenment, the first step, therefore, for the realisation of their rights by the many, which explains, to an extent at least, the start of the uprising against the few. It is a trend that is set to continue over the next few decades.

So, in the specific case, the cracks in the patriarchal nature of the Catholic Church have already appeared. Pope Francis’ intention to have women ordained deacons and to mercilessly punish sexual offences by priests, his declaration that the Church also embraces homosexuals and owes an apology to them and others it has attacked and the extension of the power of Catholic priests to forgive abortions were just a few examples of the mass changes taking place.

Despite my great enjoyment of the dialogue between the two popes, I still felt a peculiar grief, caused by associative reference to the situation and events in Cyprus. In contrast, to the two popes, the contacts of the top clergymen in Cyprus are sterile from the Christian point of view. They always meet about mundane subjects, such as the development of land in area ‘a’ or area ‘b’, the remuneration of priests, collections from church services and so on. There is no debate of a high standard or even – why not – confrontation over the free interpretation of the scriptures and updating of the dogmatic truth.

I wonder what would be discussed in a face-to-face meeting between Pope Francis and Archbishop Chrysostomos. I think there are two possibilities: one is a monologue by Chrysostomos about ‘golden investment opportunities’ he has identified with Francis yawning and another would be a monologue by the pope in favour of an open society that promotes liberty, humanity, democracy and equality with the archbishop yawning.

The grief increases at the thought of our top priests associating with the extreme right, racism, obscurantism, homophobia and intolerance. Is there any possibility that a Cypriot bishop would visit the Hospitality Centre for Unaccompanied Minors and embrace a child that has lost both his parents in the war, as the pope did in Lesvos in 2016? Would he show Christian love in practice, as the pope did, taking with him, 12 orphans, back to the Vatican and ensuring they were cared for?

Of course not! The cold indifference of our top priests towards foreign refugees is a stain on their Christianity. And this stain becomes bigger when we see our top priests in their outfits decorated with gold being driven around in expensive limousines at a time when a large number of their flock is suffering. In short, they subject themselves to the “deceitfulness of wealth that chokes the (divine) word” (Matthew 13:22).