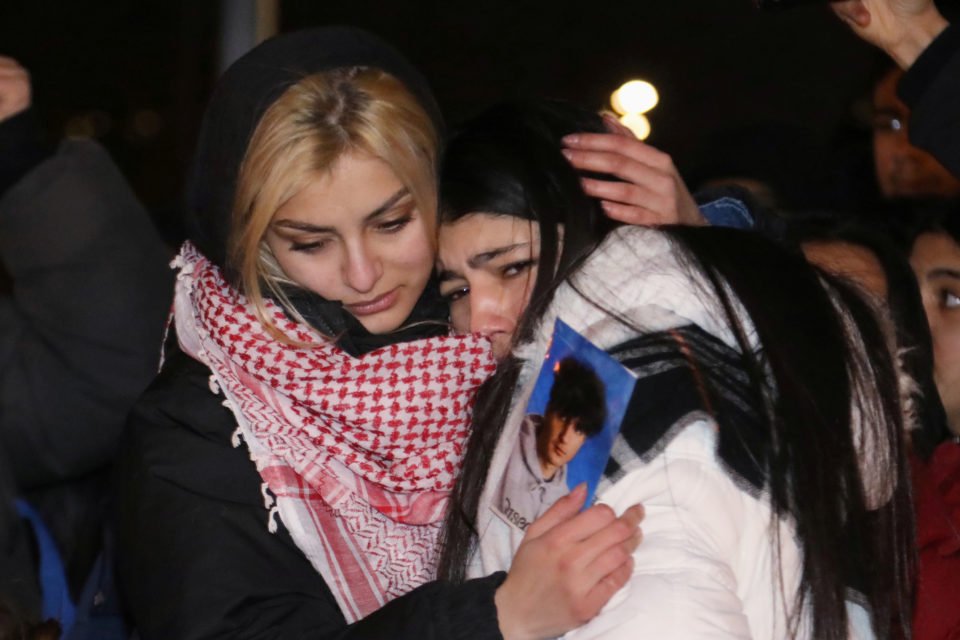 FILE PHOTO: Friends of high school student Arad Zarei hold his picture as mourners attend an outdoor vigil for the victims of the Ukrainian passenger jet

Iran’s police said on Monday officers had not fired at protesters demonstrating over Tehran’s admission that it shot down a passenger plane, as video on social media recorded gunshots and pools of blood.

He told Iran’s authorities in tweets in Farsi and English not to kill protesters and praised the “great Iranian people”, was shedding “crocodile tears” when voicing concern for Iranians, Ali Rabiei said.

To the leaders of Iran – DO NOT KILL YOUR PROTESTERS. Thousands have already been killed or imprisoned by you, and the World is watching. More importantly, the USA is watching. Turn your internet back on and let reporters roam free! Stop the killing of your great Iranian people!

However Iran’s government spokesman dismissed on Monday tweets by U.S. President Donald Trump voicing support for Iranians, saying the Iranian people would remember he killed a top general and was the reason many were facing economic challenges, state media said.

The demonstrations are the latest development in one of the most destabilising escalations between the United States and Iran since the Iranian revolution of 1979.

Tehran has acknowledged shooting down the Ukrainian jetliner in error, killing 176 people, hours after it had fired at U.S. bases to retaliate for the killing of Iran’s most powerful military leader in a drone strike ordered by Trump.

Iranian public anger, rumbling for days as Iran repeatedly denied it was to blame for Wednesday’s plane crash, erupted into protests on Saturday when the military admitted it. Demonstrators turned out again on Sunday.

Videos on social media, posted late on Sunday, recorded gunshots in the vicinity of protests in Tehran’s Azadi Square. Footage showed blood on the ground, wounded being carried and people who seemed to be security personnel running with rifles. Other posts showed riot police hitting protesters with batons as people nearby shouted “Don’t beat them!”

“They are lying that our enemy is America, our enemy is right here,” another group outside a Tehran university chanted.

Reuters could not independently authenticate the footage. But state-affiliated media reported the protests on Saturday and Sunday in Tehran and other cities, without giving such details.

“At protests, police absolutely did not shoot because the capital’s police officers have been given orders to show restraint,” Hossein Rahimi, head of the Tehran police, said in a statement carried by the state broadcaster’s website.

‘Our children were killed’: thousands protest in Iran

Iran’s latest showdown with the United States has come at a precarious time for the authorities in Tehran and their allies across the Middle East, when sanctions imposed by Trump have caused deep harm to the Iranian economy.

Iranian authorities killed hundreds of protesters in November in what appears to have been the bloodiest crackdown on anti-government unrest since the 1979 revolution. In Iraq and Lebanon, governments that include Iran-backed armed groups have also faced months of hostile mass demonstrations.

Trump wrote on Twitter late on Sunday that National Security Adviser Robert O’Brien had “suggested today that sanctions & protests have Iran ‘choked off’, will force them to negotiate.”

“Actually, I couldn’t care less if they negotiate. Will be totally up to them but, no nuclear weapons and ‘don’t kill your protesters’,” he wrote, repeating his earlier tweets making similar calls to the Iranian authorities not to open fire.

Trump precipitated the escalation between the United States and Iran in 2018 by pulling out of an agreement between Tehran and world powers under which sanctions were lifted in return for Iran curbing its nuclear programme. He has said the goal is to force Iran to agree to a more stringent pact.

Iran has repeatedly said it will not negotiate as long as U.S. sanctions are in place. It denies seeking nuclear arms.

The latest flare-up began at the end of December when rockets fired at U.S. bases in Iraq killed one American contractor. Washington accused pro-Iran militia and launched air strikes that killed at least 25 fighters. The militia responded by surrounding the U.S. embassy in Baghdad for two days. Trump then ordered the strike that killed Qassem Soleimani, the Iranian general who led pro-Iran militia across the region.

Iran fired at U.S. bases in Iraq on Wednesday, though no Americans were hurt. The Ukrainian plane, on its way to Kiev and carrying many Iranian dual nationals, crashed hours later.

After days of denying blame for the crash, Commanders of Iran’s Guards, a parallel force set up to protect the Islamic Republic and answering to Khamenei, issued profuse apologies.

Iran’s president called it a “disastrous mistake”. A top Guards commander said he had told the authorities on the same day as the crash that a missile had brought down the plane, raising questions about why Iran had initially denied it.

Canadians held vigils for the victims. Prime Minister Justin Trudeau told one event: “We will not rest until there are answers.”