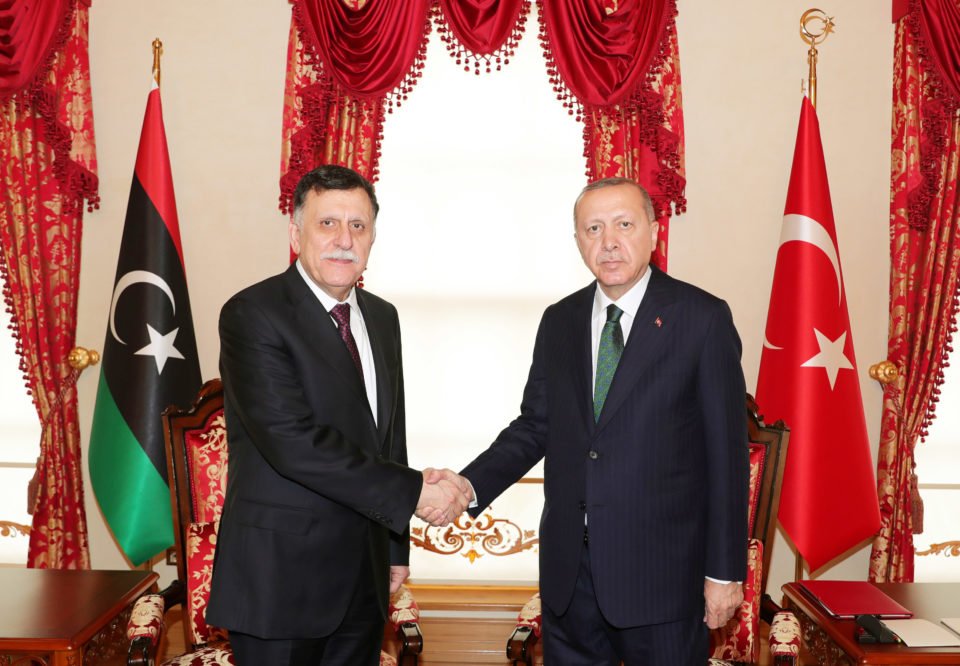 Turkey will not refrain from “teaching a lesson” to Khalifa Haftar if his eastern Libyan forces continue attacks against the internationally recognised government in Tripoli, President Tayyip Erdogan said on Tuesday.

Turkey and Russia failed to convince Haftar on Monday to sign a binding truce to halt his nine-month campaign to try to conquer the Libyan capital from forces aligned with the internationally recognised government.

The initiative was the latest attempt to stabilise the North African country, a member of the Organization of the Petroleum Exporting Countries (OPEC) which has been beset by turmoil since the toppling of Muammar Gaddafi in 2011.

Fayez al-Serraj, who heads the Tripoli-based government, signed the truce proposal after indirect talks through Turkish and Russian mediators in Moscow on Monday, but Haftar left the Russian capital without signing.

The Russian defence ministry was quoted by Interfax news agency on Tuesday as saying Haftar had been positive about the ceasefire deal and was taking two days to discuss it with tribes that support his forces.

But Erdogan said Haftar had “run away”. Turkey’s parliament voted this month to allow a troop deployment to help the Tripoli government to fend off Haftar, who is backed by the United Arab Emirates, Egypt, Jordan and Russian mercenaries.

“If the putschist Haftar’s attacks against the people and legitimate government of Libya continue, we will never refrain from teaching him the lesson he deserves,” Erdogan said in a speech to his AK Party lawmakers in parliament.

Erdogan was speaking days before a summit which Germany is hosting with the United Nations on Sunday.

The conference will involve the rival camps, their main foreign backers and representatives from the U.N., the United States, Russia, Britain, France, China, Turkey and Italy.

Serraj and Haftar have both been invited to the conference. Serraj is backed by Turkey, while Haftar’s Libya National Army (LNA) faction is supported by Egypt and the United Arab Emirates, which have for years provided training and weapons, according to U.N. reports.

“The goal of this process is, with a group of states and international organisations, to support the efforts of the United Nations for a sovereign Libya and for the reconciliation process within Libya,” the German government said.

Since September, Russian mercenaries have joined the LNA forces, helping to make small gains on the Tripoli frontline in recent weeks. That has prompted Turkey, which has business interests in the country, to deploy soldiers to Libya to help the Tripoli government.

“It is our duty to protect our kin in Libya,” Erdogan said on Tuesday, adding that Haftar would have taken over all of the North African country if Ankara had not intervened.

Haftar’s office and his forces have not officially confirmed the commander rejected the truce proposal, but a website linked to the forces said he would not sign.

Conflict in Libya has wrecked the economy, disrupted oil production and triggered flows of migration to Europe that have now largely been stemmed.

Italian Prime Minister Giuseppe Conte, who has been invited to the conference on Sunday, said during a visit to Cairo: “We must be hopeful because we absolutely must not resign ourselves to the fact that the Libyan population has been living for years in the midst of suffering and squandering resources rather than using them to promote well-being and prosperity.”

Every reservist with a gun at home should undergo yearly training