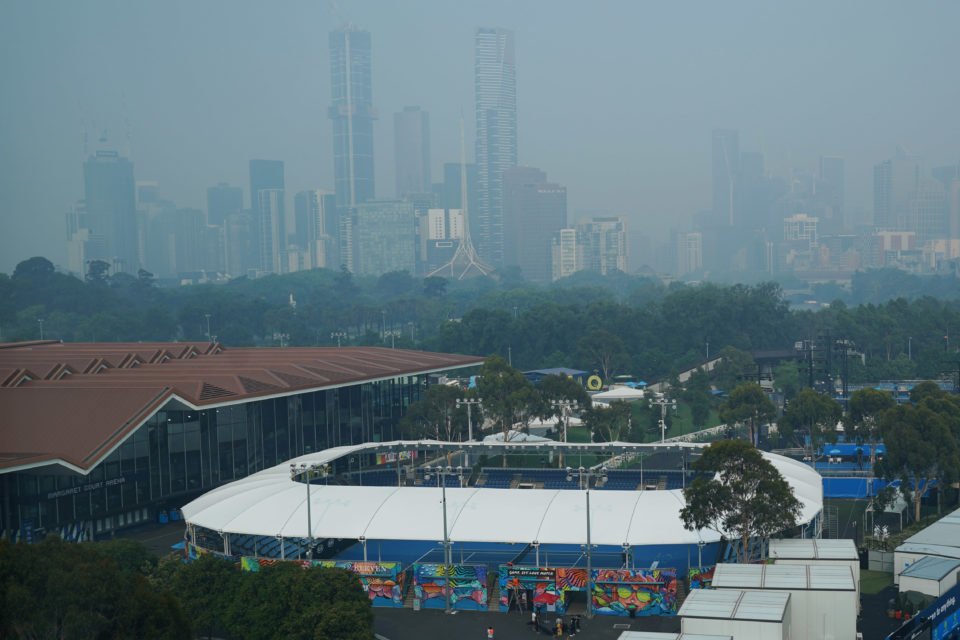 A general view is seen of smoke haze from bushfires at Melbourne Park, venue of the Australian Open.

Tempers flared at the Australian Open qualifying on Wednesday as players battled through another day of smoky air and two of the game’s all-time greats were labelled “selfish” for not protesting about the conditions.

Qualifying was disrupted for a second successive day, firstly by bushfire smoke and later by a torrential rain storm which cleared the air but put an end to play at Melbourne Park.

Tournament organisers have been under fire for ploughing ahead with the qualifiers after an initial delay on Tuesday, with players complaining of breathing difficulties and one forced to retire from a match after suffering a coughing fit.

The ill will spilled over into Wednesday, with Canadian world number 103 Brayden Schnur taking aim at 20-times Grand Slam champion Roger Federer and world number one Rafa Nadal for not taking a vocal stand for the lower-profile players in qualifying.

“It’s got to come from the top guys – Roger and Rafa are a little bit selfish in thinking about themselves and their careers,” Schnur told Australian Associated Press after winning his qualifier against Austrian Sebastian Ofner.

Schnur said he felt “super dryness” in his throat and that conditions were “100 percent not normal”.

“They’re just trying to shove us on the court because we’re qualifiers.”

France’s Nicolas Mahut posted a picture of himself wearing a mask over his mouth and nose with the caption: “Ready for my first round.”

Canada’s Vasek Pospisil, a member of the ATP Player Council, tweeted: “It’s time for a players’ union. This is getting absurd.”

Australia is experiencing one of its worst bushfire seasons on record, with fires burning for months and killing 28 people, destroying more than 2,500 homes and razing forests and farmland the size of Bulgaria.

Tennis Australia said it would continue to monitor on-site data and consult their medical team, the local bureau of meteorology and government scientists to determine whether conditions were fit for play.

“They do have a heat policy, I think they need to plan out an air quality policy in the same way,” he told media.

“You can’t have a blanket solution, you need to look at the individual circumstances and what the alternatives are for protecting people.”