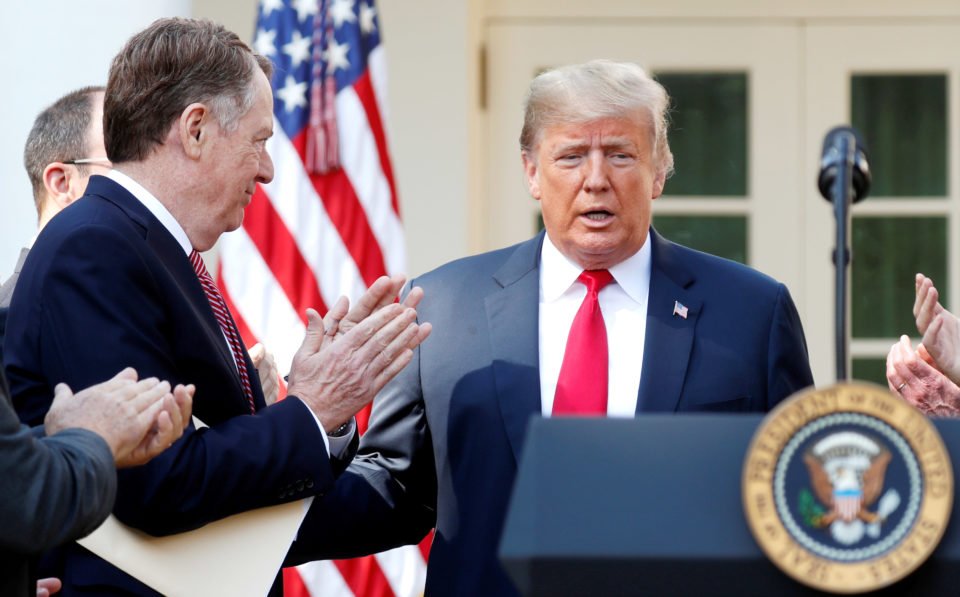 US President Donald Trump and Chinese Vice Premier Liu He signed a deal on Wednesday in the White House that cut some U.S. tariffs on Chinese goods in exchange for Chinese pledges to purchase more of American farm, energy and manufactured goods and address some U.S. complaints about intellectual property practices.

Following are details of the deal released by the United States Trade Representative. Beijing has not yet released a version of the deal in Chinese, after an extended translation process that continued until Tuesday night.

China agreed to increase purchases of American products and services by at least $200 billion over the next two years.

That would give an average annual total of about $40 billion, a number Trump has touted before.

The United States will cut by half the tariff rate it imposed on Sept 1. on a $120 billion list of Chinese goods, to 7.5%.

US tariffs of 25% on $250 billion worth of Chinese goods put in place earlier will remain immediately unchanged. These could be rolled back as part of a Phase 2 trade negotiation, US Treasury Secretary Steven Mnuchin said on Wednesday.

Tariffs that were scheduled to go into effect on Dec. 15 on nearly $160 billion worth of Chinese goods, including cellphones, laptop computers, toys and clothing, are suspended indefinitely. China’s retaliatory Dec. 15 tariffs, including a 25% tariff on US-made autos, have also be suspended.

The deal contains commitments by China to follow through on previous pledges to eliminate any pressure for foreign companies to transfer technology to Chinese firms as a condition of market access, licensing or administrative approvals and to eliminate any government advantages for such transfers.

The currency agreement contains pledges by China to refrain from competitive currency devaluations and to not target its exchange rate for a trade advantage — language that China has accepted for years as part of its commitments to the Group of 20 major economies.

As part of the deal China has made “enforceable commitments to refrain from competitive devaluation” and agreed to publish relevant data on exchange rates and external balances, the US Treasury said Monday.

The deal subjects any violations of currency commitments to the agreement’s enforcement mechanism, under which they could incur US tariffs.

A senior Trump administration official said the currency agreement is based on provisions in the US-Mexico-Canada Agreement trade deal, which require the three countries to disclose monthly data on international reserve balances and intervention in foreign exchange markets, along with quarterly balance-of-payments data and other public reporting to the International Monetary Fund.

The United States and China will resolve differences over how the deal is implemented through bilateral consultations, starting at the working level and escalating to top-level officials.

If these consultations do not resolve disputes, there is a process for imposing tariffs or other penalties.

Lighthizer told reporters the United States expected neither side would retaliate if appropriate action was taken as part of the process and following “consultation in good faith.”

US officials said the deal includes improved access to China’s financial services market for US companies, including in banking, insurance, securities and credit rating services. It aims to address a number of longstanding US complaints about investment barriers in the sector, including foreign equity limitations and discriminatory regulatory requirements.