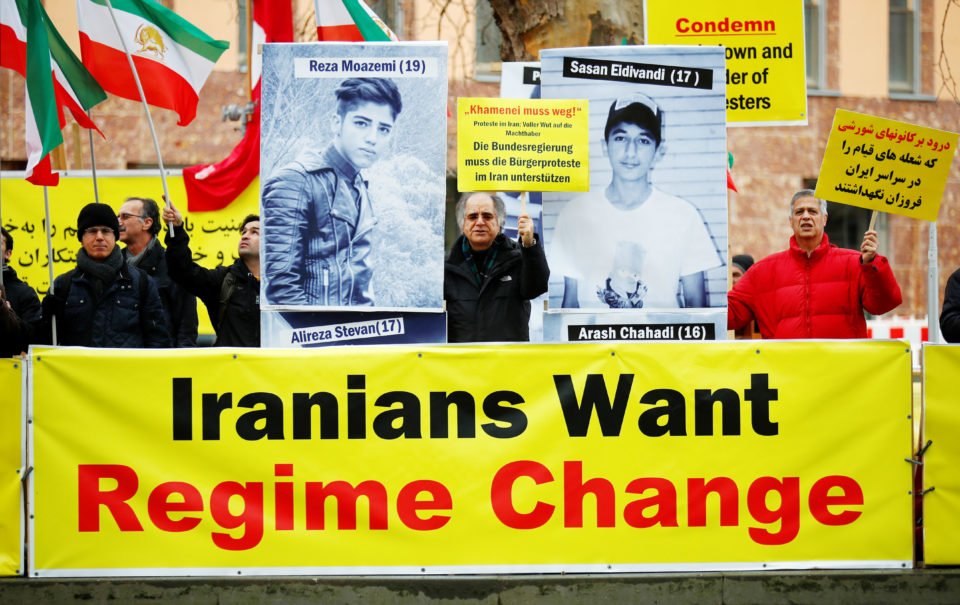 Activists protest against Iranian government in front of German Federal Foreign Office after a Ukrainian passenger plane crashed in Iran, in Berlin, Germany

Iranian social media posts urged citizens to take to the streets for a fifth day on Wednesday, after public anger erupted following the belated admission by the authorities that they had shot down a passenger plane in error last week.

Protesters, with students at the forefront, have staged daily rallies in Tehran and other cities since Saturday, when the authorities admitted their role in bringing down a Ukrainian plane last week, killing all 176 aboard, after days of denials.

The plane was downed by air defences on Jan. 8 when the armed forces were on high alert for U.S. reprisals following tit-for-tat military strikes, the latest escalation in a crisis has rumbled on for years over Iran’s nuclear programme.

Britain, France and Germany formally accused Iran on Tuesday of violating the terms of its 2015 agreement to curb its nuclear programme, a move that could lead to reimposing U.N. sanctions.

Iran’s president called the plane disaster an “unforgivable error”, the military has issued profuse apologies and the judiciary said it had arrested some of those accused of having a role in the crash, in the effort to quell public outrage.

Some protests have been met with a violent crackdown. Videos on social media have showed people being beaten by riot police and shocked with electric batons. They also recorded gunfire and blood on the ground. Most protests flared at night.

“We’re coming to the streets,” one posting circulating on social media said on Wednesday, urging people to join nationwide demonstrations against a “thieving and corrupt government”.

Wednesday marks a week since the crash, coinciding with a Muslim Shi’ite tradition of mourning the dead after seven days.

Thousands of protesters have been shown in videos gathering in the past four days in cities across Iran. Many have been outside universities, while Tehran’s central Azadi Square has been a focus. But the full scale of protests and unrest is difficult to determine due restrictions on independent reporting.

State-affiliated media have reported protests taking place, but have given limited details.

Police had denied shooting at protesters and say officers were told to show restraint. The judiciary said it had arrested 30 people but would show tolerance to “legal protests”.

Iranians were outraged the military took days to admit it had shot down Ukraine International Airlines flight 752, carrying mainly Iranians or dual national. They asked why the plane had been allowed to take off at a time of high tension.

Iran had launched missile strikes against U.S. targets in Iraq hours earlier in retaliation for a U.S. drone strike that killed a top Iranian commander in Iraq on Jan. 3.

Iran’s semi-official Fars news agency said a person who had posted a video online last week of a missile striking the plane has been taken into custody by the Revolutionary Guards, the elite force that said one of its operators shot down the plane.

Since the official admission, Iranians held vigils for the victims, which swiftly turned into protests against Iran’s system of clerical rule. “Death to Khamenei,” protesters have chanted in anger at Supreme Leader Ayatollah Ali Khamenei.

The disaster and unrest have piled pressure on the Iran’s rulers, who are already struggling to keep the economy running under stringent U.S. sanctions imposed after Washington withdrew in 2018 from the nuclear pact Tehran had with world powers.

Iran has stepped back from its commitments to the 2015 deal, under which Tehran said it would scale back on its nuclear work in return for the lifting of international sanctions.

Britain, France and Germany said on Tuesday they had launched a dispute mechanism to challenge Tehran for breaching limits on its programme, which Tehran has insisted is peaceful but Western capitals have said is designed to develop weapons.

Russia, another signatory to the pact, has said triggering the mechanism might make it impossible to return to the deal.

On Thursday, London hosts a meeting of Canada, Ukraine, Britain and other nations who had citizens on the downed plane to discuss legal action against Iran, Ukraine said.

Canada, which had 57 citizens on the flight, has sent investigators to Iran, where they toured the crash site on Tuesday, Iranian media reported.

1917 has to be watched on the big screen