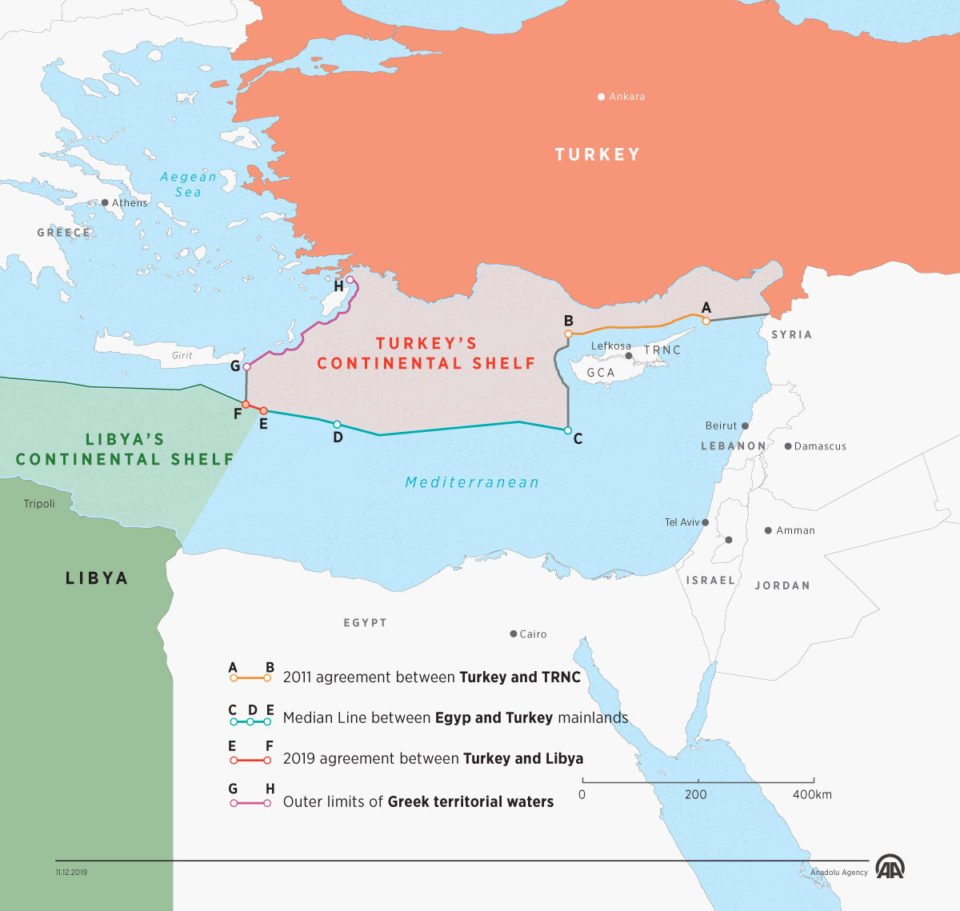 Maritime Turkey-Libya accord map published by the Anadolu Agency

Islands have the same rights as mainland regions to an exclusive economic zone (EEZ) and continental shelf, the US State Department said on Wednesday.

In response to a question by the Athens News Agency (ANA), a spokesman of the US State Department, said Ankara’s claims on the matter were contrary to international law.

On the agreement on maritime boundaries in the Mediterranean Sea signed last November by Turkey and the Tripoli-based Government of National Accord (GNA) in Libya the spokesperson said: “Decisions that fail to take into account the interests of all the interested states are unhelpful [and] provocative,” adding that Ankara’s claims are contrary to international law, which stipulates that islands have the same rights as mainland regions to an EEZ and continental shelf.

The statement by the US official is a reply also to claims by Ankara concerning Greece and Cyprus.

Following reactions to the agreement by Greece, since it ignored Crete, which is located between the coasts of Turkey and Libya, but also by Cyprus, Turkish foreign ministry sources had argued that the Greek islands and the western part of Cyprus should not be given a continental shelf /EEZ but only territorial waters.

The argument was based on that according to international law, the main term to be used in such cases is the equitable principle and not the principle of equidistance based on which Cyprus has made agreements on the delimitation of maritime jurisdiction with Egypt, Lebanon, and Israel.

“Greece has overlapping maritime claims in the area that is included in the Turkey-Libya memorandum,” the state department spokesperson said, adding that it is a standing US policy to encourage states to resolve their problems in a peaceful way and in accordance with international law.

Given that the accord affects Greece, the country has requested to participate in the conference to be held in Berlin on Sunday by German Chancellor Angela Merkel in a bid to help resolve the conflict in Libya, but the invitation never arrived.

The German government announced that Commander of the Libyan National Army, Khalifa Haftar and the leader of the UN-backed government, Fayez al-Sarraj, will attend the conference as well as envoys from the US, Russia, China, the UK, France, Italy, the EU and the UN. German Chancellor Angela Merkel also extended an invitation to the African Union, the Arab League, as well the Republic of Congo, Algeria, Egypt, the United Arab Emirates and Turkey.

The fact that Turkey was invited but not Greece, stirred strong reactions in Athens and Nicosia, mainly due to that Ankara, despite her provocative actions in the region participates in such procedures as a key player.