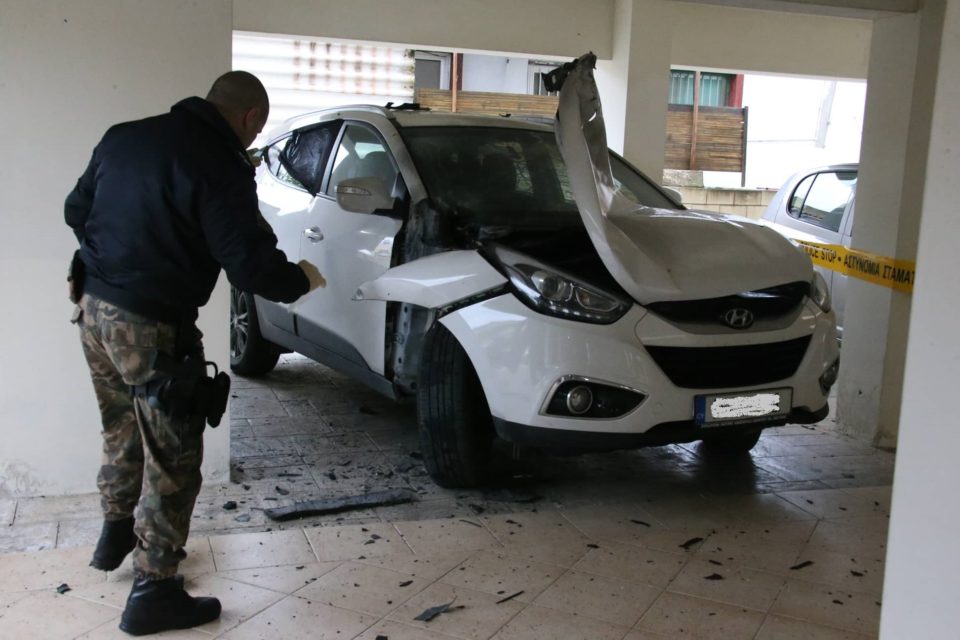 The damaged car belonging to the 33-year-old referee

All Cyprus league matches have been cancelled indefinitely the referees’ association said on Friday, following a bomb attack against one of their own in Larnaca earlier in the day.

“Our abstention is not just for the weekend, it is indefinite. We want to talk, meet with the Cyprus Football Association (CFA), a representative of the government,” said the secretary general of the referees’ association, Vasilis Demetriou.

A CFA announcement said it was postponing all scheduled fixtures in all leagues after referees protest over the car bomb placed on a car belonging to 33-year-old referee Andreas Constantinou.

The improvised device went off at around 1.55am. It had been placed on the front part of the car causing extensive damage.

The vehicle was parked in the garage of the apartment building where the ref lives.

Reports said Constantinou was also the referee in a cup game between Ayia Napa and Pafos FC for which a notice had been received suggesting it could have been fixed due to suspicious betting activity.

It was one of five notices the CFA received in recent days.

The CFA condemned the bombing, describing it as a terrorist act.

“Our referees made the decision to abstain. It’s a sensible decision, it is not the first time a bomb has been placed. I spoke to the referees and told them to decide what they want, and I will respect it. We as the CFA are directly responsible,” he said.

The justice minister on his part said he had a constructive meeting with the police chief and the CFA head.

“We want first of all to strongly condemn the actions of the bomb attack on the referee, [which] regardless of motivation, is a sad fact,” Savvides said.

Commenting on the ‘red notices’ received by Cyprus football, Savvides said they all agreed at the meeting to ask for help to deal with match fixing from European football association Uefa.

Earlier, the referee association warned that inflammatory statements against match officials only served to once more instigate extreme acts against them.

Such statements were also uttered by President Nicos Anastasiades on Thursday evening during an award ceremony for top athletes and before the attack.

The association said, “last night’s statements … were an injustice to all referees and even inadvertently, they provided cover for the real culprits.”

The referees said the state was responsible for stamping out corruption in football and “this is what we demand right now” and not just talk and promises.

Speaking at the event on Thursday, Anastasiades said “… we must see what to do with the ‘red cards’ we must show refs … some of the refs, because there are honest ones who honour the sport, but there are those who, unfortunately, together with some corrupt football officials, lead us to be served with red files (notices) every so often from international organisations.”

The cancellation came amid yet another turbulent time for Cypriot football, which is once again engulfed in match-fixing and corruption allegations.

This was not the first time a referee’s car had been targeted.

There have been more than a dozen bomb and arson attacks against referees’ property over the past decade amid public claims of corruption.

CFA chairman Koumas himself was targeted in October 2017 when his Mercedes S class was torched. Referee Leontios Trattos was hit a couple of times with arson and a bomb attacks against his vehicles, while in in October 2014, an improvised explosive device was placed at the referee association club in Latsia.

Police have yet to clear any of the 84 match-fixing notices sent by Uefa since 2011 or the attacks.

In the most recent cases, Andreou said the bets had been placed in Asian countries and the force was having difficulties securing any data.