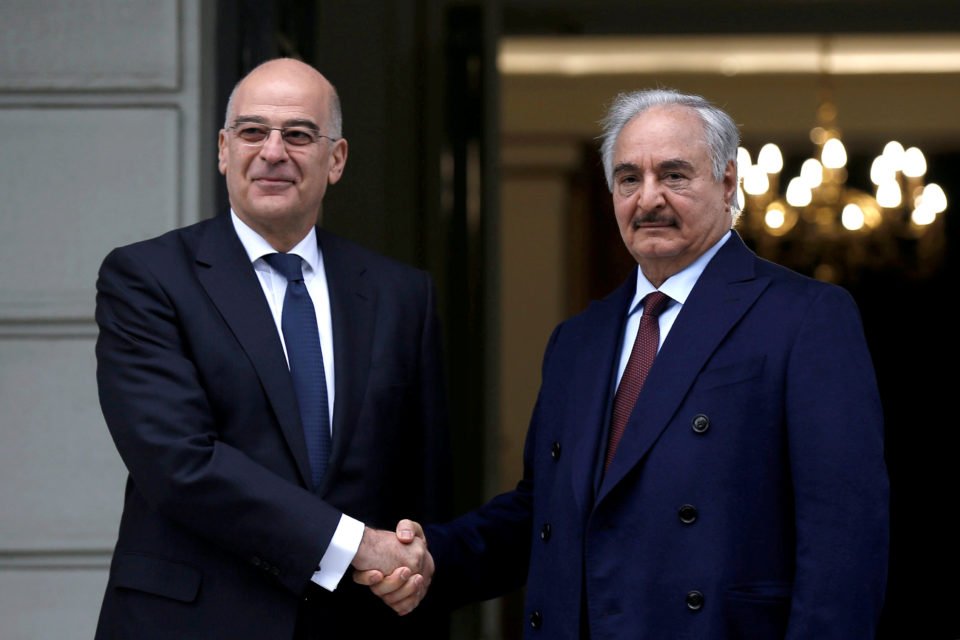 Germany and the United Nations will push rival Libyan camps and their foreign backers fighting over the capital to agree on Sunday to a truce and monitoring mechanism as first steps towards peace, diplomats and a draft communique said.

But the meeting in Berlin at Chancellor Angela Merkel’s headquarters will not try to broker power-sharing between the eastern-based forces and the internationally-recognised government in Tripoli, said diplomats briefed on preparations.

The summit will put pressure on Khalifa Haftar and his eastern Libyan National Army (LNA) to halt a nine-month offensive against Fayez al-Serraj’s government in the coastal capital after a week-long lull in fighting.

About 140,000 people have been forced out of their homes.

“I hope the war ends and we have our country back to live in peace,” said Aisha Ali Saleh, a mother-of-eight in an apartment on an abandoned building site with no power or running water.

Haftar and Serraj are both due in Berlin – along with leaders of Russia, Turkey, Egypt and other Western and Arab powers – in the latest bid to stabilize the OPEC member nation in turmoil since the 2011 fall of strongman Muammar Gaddafi.

Members of the transatlantic alliance NATO and Arab countries were instrumental in removing Gaddafi then, and foreign powers have again been the drivers of the aftermath, supplying drones, guns and ammunition to the factions.

Haftar is backed by the United Arab Emirates (UAE), Egypt, Jordan, Sudanese and Chadian fighters, and most recently Russian mercenaries. France has also given some support.

On the other side, Turkey has rushed to Serraj’s rescue by sending troops to balance out recent gains by Russian snipers. Hundreds of pro-Turkey fighters from Syria’s war have also been deployed, diplomats say.

“Berlin is an opportunity to restart the political process and build on the pause in fighting,” said a Western diplomat.

A six-page draft communique seen by Reuters calls for “credible, verifiable, sequenced and reciprocal steps” starting with a truce to be monitored by technical committees.

That could involve beefing up the existing U.N. mission in Libya or deploying troops from Russia, Turkey or other states, the diplomats said. The draft vaguely mentioned long-delayed plans for elections and a national government, without any timeline, just calling for U.N.-led follow-up meetings.

Russia’s Foreign Minister Sergei Lavrov urged Haftar and Serraj to come together in Berlin without adding conditions and blaming each other afterwards. “Relations between them are currently very tense, they don’t even want to be in the same room together,” he told reporters on Friday.

Greek Foreign Minister Nikos Dendias met Haftar on Friday and urged him to adopt a “constructive spirit” in Berlin. Athens, which opposes a recent Turkey-Libya pact on Mediterranean sea boundaries, had wanted to participate in the summit.

“We encouraged the commander to take part with a constructive spirit in Berlin’s procedure and try … to achieve a ceasefire and the restoration of safety in Libya,” Greek Foreign Minister Nikos Dendias told reporters after the meeting.

He said Athens should have been a participant in the Berlin conference on Libya on Sunday.

Chaos in Libya has made it a hub for human traffickers to ship migrants to Italy, while Islamist militants have also exploited the disorder. The latest conflict has not, however, disrupted oil output at about 1.2 million barrels per day.

In the complex outside power-play, there was no indication that Egypt and the UAE, which see the former Gaddafi general Haftar as the best bet for stability, will end their support.

But Western diplomats hope they have realised Haftar cannot take Tripoli and that a stalemate would give Turkey a foothold, which Cairo especially fears. Turkey-Egypt ties have been frosty since the Egyptian army in 2013 ousted Muslim Brotherhood president Mohammed Mursi, an ally of Turkish President Tayyip Erdogan.

“The longer the war takes, the stronger the Turkish presence in Libya,” the diplomat said.

Even if Haftar breached Tripoli defences, he would still have to conquer Misrata, a power centre in western Libya allied to Serraj and home to thousands of fighters.

Some Russian mercenaries have been pulled back in recent weeks from the Tripoli frontline, undermining recent progress by Haftar‘s forces as Russia pressures him for a ceasefire.

Those displaced by the conflict live in cramped schools and buildings, with some recently moving closer to the city as Haftar‘s forces advanced.

Saleh’s husband died of a heart attack in April when the war started, cutting off his state pension of 450 dinars ($322.53).

“My 17-year-old son sleeps at night in our car so he can give us enough space,” she said, covering her face as she cried.

Saleh’s neighbour, 36-year old father-of-five Mohamed Siddiq, was optimistic. “Our hope is very, very big (that the Berlin conference) will announce a ceasefire.”