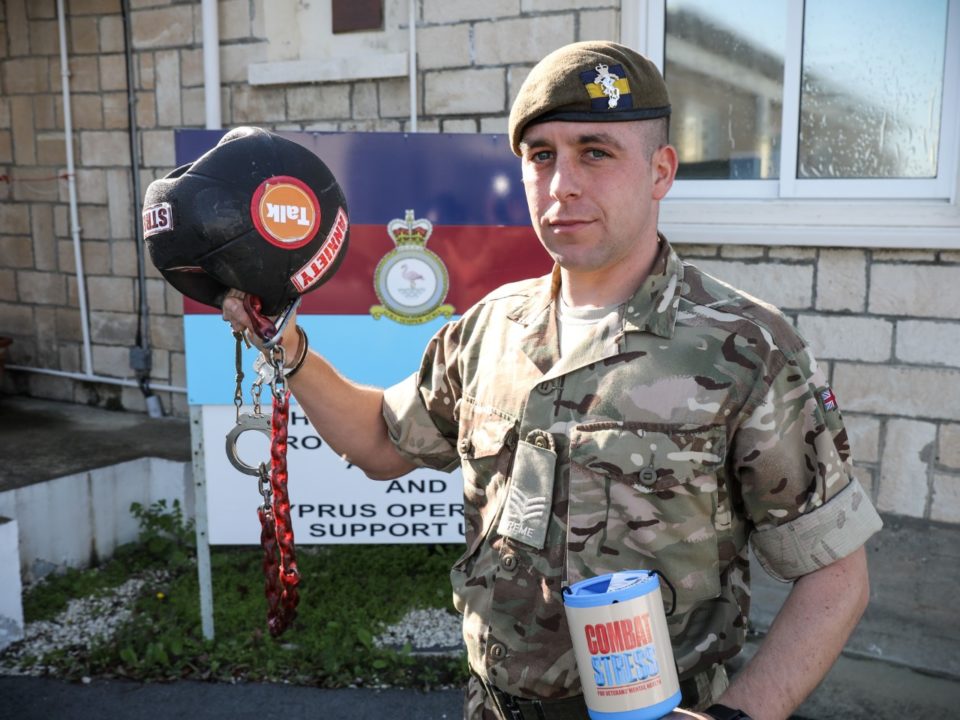 The Medicine Ball Challenge raises money for Combat Stress, the soldier’s charity, highlighting an issue close to the hearts of many serving and former personnel

British Forces Cyprus personnel island-wide have taken up the what is known as the Medicine Ball Challenge to raise awareness about mental health issues.

The three kilogramme medicine ball, which is due to spend the next two years in BFC, is a metaphor for the weight and burden service personnel, veterans and people all over the world carry with them daily.

The initiative, which raises money for Combat Stress, the soldier’s charity, highlights an issue close to the hearts of many serving and former personnel.
In the past, some members of the Forces community have felt unable to discuss the issue because of a stigma surrounding mental health problems, including stress, anxiety, Post Traumatic Stress Disorder and depression.

And these highly-important issues have been linked to numerous mental health related deaths of veterans and soldiers and according to Sergeant Mark Jackson from the 1st Battalion, The Princess of Wales’ Royal Regiment, who completed the gruelling Cyprus 4-Day Challenge last October with the medicine ball strapped to his arm, it is an issue that can’t be ignored.

He said; “Not all wounds are visible, but many of the issues could be avoided if only we could encourage people to talk about what they are feeling and going through. There must be more awareness.

“I have always been very keen to take part in charity events and try to make a difference with issues that concern our Forces community and this one is so important.
“The Medicine Ball Challenge will raise awareness and money about these issues all at the same time”

Those taking part across BFC will strap the medicine ball to their wrist and only take it off whilst “sleeping, driving and dressing” according to Sgt Jackson.

He continued: “The reason we do this is to make every simple task feel like a challenge. It also gets people asking questions about why you are doing it and then you can raise more awareness about these issues.

“The aim of the Medicine Ball Challenge is also to encourage dialogue in order to break down the stigma surrounding mental health, so that those suffering know its ok, not to be ok and seek help before it is too late.”

As the medicine ball begins making its way around BFC, Sgt Jackson and some of his other colleagues across the Bases are already planning their next challenge.
He continued: “In March I will be taking part in the Paphos Marathon with the medicine ball and hopefully I will be able to raise a lot more money between now and then.

“This is an issue that cannot be ignored. If you are struggling, please, speak to someone, be it a work colleague, a friend, even a stranger, just speak out and ask for help.

“As the medicine ball passes through BFC over the next two years, don’t be afraid to ask questions, we want as many people as possible to understand this very serious issue.”

High time everybody faces the consequences of their actions