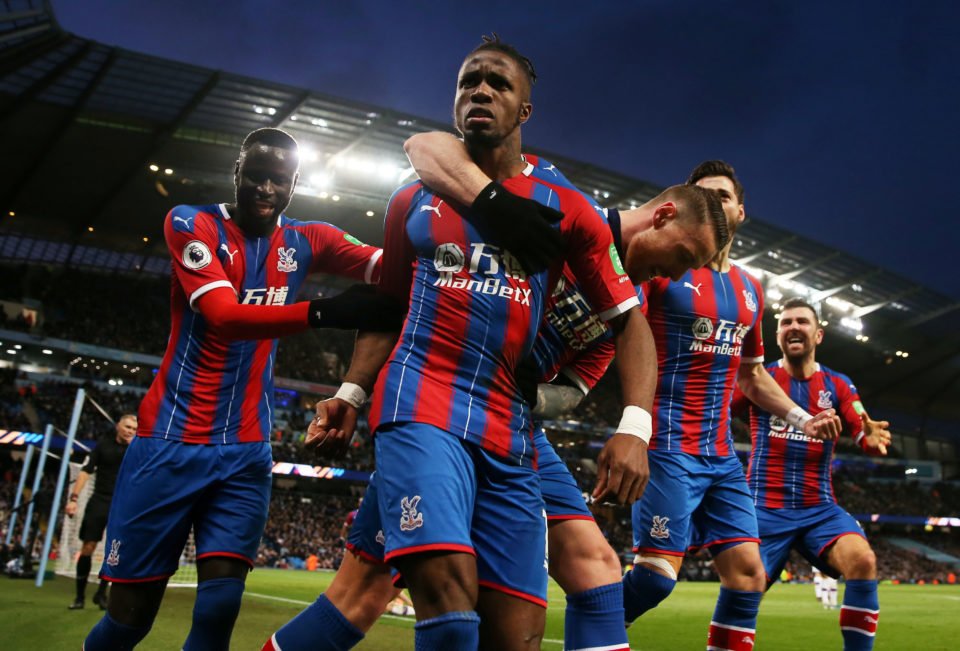 Crystal Palace grabbed a last-minute equaliser, through a Fernandinho own goal, to earn a 2-2 draw at Manchester City, as the champions' title defence suffered another blow

Even when Liverpool are not in action they continue to bolster their seemingly impregnable Premier League lead and it happened again on Saturday as second-placed Manchester City could only draw 2-2 with Crystal Palace at the Etihad Stadium.

Fernandinho’s 90th-minute own goal robbed them of victory and left Pep Guardiola’s side 13 points behind Liverpool who have played two games less and who can stretch their advantage to 16 if they beat Manchester United on Sunday.

On a big day at the bottom of the table, bottom side Norwich City gave themselves a lifeline with a 1-0 defeat of free-falling Bournemouth in a match in which both sides had a man sent off.

Watford’s revival continued as they took their points tally in new manager Nigel Pearson’s seven games in charge to 14, although Troy Deeney missed a penalty in their 0-0 home draw with Tottenham Hotspur who have stalled under Jose Mourinho.

Tottenham are in eighth spot after a four-game winless run, two places higher than Arsenal who could only draw 1-1 at home to Sheffield United, who continue to impress in seventh place.

Both Tottenham and Arsenal’s hopes of challenging for a top-four finish are fading by the week. However, Chelsea missed the chance to open up a commanding lead over their rivals as they slipped to a 1-0 defeat by Newcastle United in the day’s late kickoff.

Chelsea had chances to snatch victory in a tight affair at St James’ Park, but their profligacy in front of goal proved costly, as Isaac Hayden headed a dramatic stoppage-time winner to earn his side a first win in five league games.

Southampton’s surge hit the buffers as they surrendered a 2-0 lead at home to Wolverhampton Wanderers to lose 3-2.

Mexican striker Raul Jimenez struck twice after the break for Wolves who moved into sixth spot.

David Moyes’s West Ham United drew 1-1 at home to his old club Everton to remain in the thick of the relegation dogfight while Aston Villa and Brighton & Hove Albion drew 1-1 with Jack Grealish equalising for Villa who stay third from bottom.

Manchester City’s frenetic afternoon rather summed up their season so far, as they misfired against a Palace side who beat them in the corresponding fixture last season.

But City’s relief turned to frustration as Wilfried Zaha powered past John Stones and his cross deflected in off Fernandinho and beat City goalkeeper Ederson.

“It was a tight game and unfortunately we could not win it,” Guardiola said.

Premier League history, of sorts, was made at Carrow Road where Paul Tierney became the first Premier League referee to send off a player after consulting a pitch-side monitor, adjudging Norwich’s Ben Godfrey’s late challenge on Callum Wilson worthy of the harshest punishment.

It ratcheted up the tension for the home fans as Norwich should have been more than one goal ahead by the time Godfrey went off to make it 10 versus 10 in the 76th minute.

But Norwich hung on to condemn Eddie Howe’s Bournemouth to a fourth consecutive defeat and leave them second from bottom, three points behind 17th-placed Watford.

“It is an important win for us. Three points, clean sheet, good for mood and confidence and the table. A good evening for us,” Norwich boss Daniel Farke said. “There were some spicy moments in the last 10 minutes and anything can happen.”

Bournemouth have picked up four points from the last 36 on offer in the Premier League.