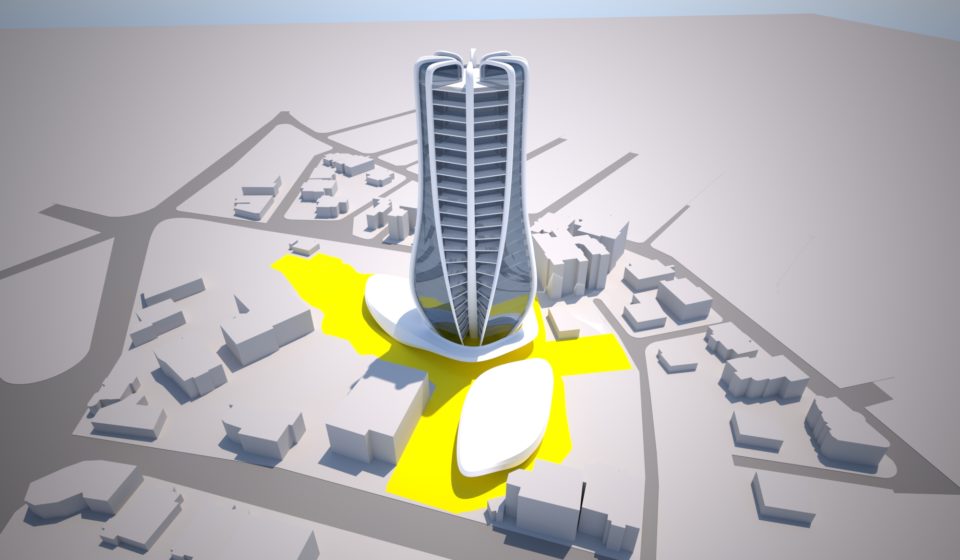 The design for the high-rise building in central Paphos

The contentious debate over constructing high-rise buildings in Paphos has been reignited, as a Cyprus-based architect’s firm released one of their latest tower designs to the public.

Their initial design is for a 22-floor multi-storey, and if ever given the go ahead – at present most unlikely – it would be built in the centre of Paphos, close to Papantoniou supermarket and Evagoros Palliakarides Street.

Designed by Konstantinos Psomas of Psomas Studio of Architecture, a design studio based in Nicosia and Paphos, told the Sunday Mail that the tower would create a landmark building and help give the town a new character.

Psomas joined his father’s firm in 2017, with the aim of regenerating it and using his expertise gleaned from working for Zaha Hadid Architects, which also designed the long-delayed Eleftheria square project in Nicosia.

“For Paphos this is an exciting opportunity, and for me as an architect from Paphos, this is an opportunity to transfer international experience I gained working with Hadid to my own city, it would be very fulfilling,” he said.

Psomas’ work with the Hadid practice was mostly on high-rise buildings.

“We have designed one for Paphos and we are waiting to see what happens, the authorities suggested only 12 floors, but it can’t really be done as it’s a specific design, the skin of the tower is in specific proportions and dimensions and it was created as a 22 floor concept, 16 is the least it can be,” he said. “As it is, I don’t think it will be done but I don’t know.”

The architect would certainly meet fierce opposition even from those who support high rises in general.

Paphos councillor, Andreas Chrysanthou, also a consultant engineer and qualified expert in energy certificates, has EPC certified (Energy Performance Certificate) all sorts of buildings in Cyprus including high rises. He believes that vertical builds are the way of the future, but not for the centre of Paphos.

“The municipality said no to tall buildings in Paphos centre and have set the limit at eight storeys, although permission has recently been given for a 12-storey building,” he said.

Chrysanthou said that as predictions from the World Health Organisation suggest that 70 per cent of the world’s population will be living in cities by 2050, it makes sense to build vertically, freeing up land for agriculture and greenery.

“High rise can be built to suit every budget, such as in the different areas of New York. The footprints of these buildings are beneficial in every way. I have issued certificates for both a 37-and a 27-floor high rise in Limassol and their energy consumption and CO2 emissions are dramatically reduced.”

Limits have also been set for Poseidonos Avenue seafront in Kato Paphos, Chrysanthou added, and they are also set back from the coast, with the road in between them and the sea.

“We have set a maximum of 16 floors here and when the Aloe Hotel is demolished, a 14-storey hotel and 13-storey residential building will be built there.”

Psomas underlined the advantages of contemporary high-rise buildings in a city: to free up space, allow for more green parks and open views, and create landmark buildings and provide a new character.

“People are still sceptical about having high rises in Paphos because of the history of mostly low buildings. But every city has a history and it evolves.”

Numerous cities around the world are hiring architects to create master plans with gradients in different areas, and how much new buildings cost. However, he said there is nothing comparable in Cyprus.

“It’s better to build towers in the town than coastal areas, these can be contemporary business hubs which would encourage other countries to transfer their business to Paphos.”

With the town currently being modernised and transformed into a smart city, Psomas believes a new contemporary environment can work alongside the old as the idea is to embrace people and provide multiplicity.

However, Andreas Evlavis of the Paphos Greens said that as a town of only 50,000 people, Paphos does not need such buildings, nor do they fit with the existing environment.

“We are not a town or country of millions where we can say that we need this kind of high rise living. Small towns don’t need them as they ruin the area,” he said.

In fact, the lack of such buildings is the huge difference between Paphos and Limassol, which has seen such buildings mushroom, and that ‘everyone talks about the beauty of Paphos.’

“Imagine, suddenly a 20 or 30 floor building goes up next to your home. You lose the sun and your quality of life. Behind all of this is money. It also brings added problems with water supply, sewerage and fire.”

Referring to recent upgrades in the centre of the town, he noted that no-one would accept building multi-storeys in the historical heart of the area.

“We have tried to build something nice and then we would ruin it by building tall buildings, it doesn’t make sense.”