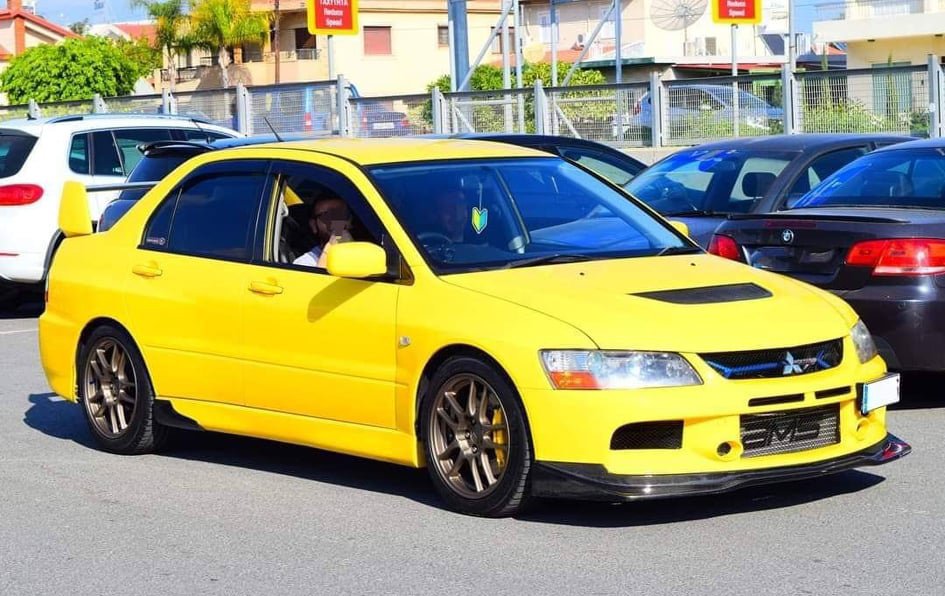 The Mitsubishi Lancer Evolution that was stolen

A stolen sports car united Cypriots from both sides of the divide this week in a quest to find the yellow Mitsubishi Lancer Evolution and identify the thieves.

A young man ‘Marios’ (not his real name) had his pricey sports car stolen on Tuesday night by three men who pretended to be interested in buying his car but instead beat him up, sprayed his face with pepper spray and threatened him with a knife, before driving away in his car and abandoning him in an unknown location in the mixed Turkish and Greek Cypriot village of Pyla.

Greek Cypriot police were reportedly dismissive of the victim’s plight when Marios sought help. That the car was found on Wednesday in the north was largely down to Turkish Cypriot sports car lovers who solved the crime.

Early on Thursday, Marios, his brother and friends posted grateful messages on Facebook, highlighting the positive outcome and thanking both the Greek Cypriots and Turkish Cypriots who helped identify the suspects and recover the car.

A close relative of Marios, who wishes to remain anonymous, told the Sunday Mail that the 24-year-old law graduate initially had no intention of selling his car.

“He has a second car for everyday and only drives it like, once a month.”

But then a stranger made him an offer he could not refuse.

Marios saw a social media post from a man named ‘Loucas Panatikos’, a fake account which is now deleted, seeking to buy the specific car model and offering a high price.

Marios met with the potential buyer, a young man under 30 who spoke broken English and no Greek, at Jumbo in Oroklini last Saturday, when they decided on a price ranging from €25,000 to €30,000 depending on the car’s condition.

During their next meeting in Pyla on Tuesday, ‘Loucas’ brought with him a car mechanic and a friend of his. Marios was also accompanied by a friend.

They decided to test drive the car.

Only the owner of the car, the pretend-buyer and the car mechanic went for the drive.

“As they were driving, Marios noticed many Turkish signs and asked them to turn back,” the relative said. “But then, the buyer said he wanted to stop and check a suspicious noise the car was making.”

This is when Marios realised something was wrong. “He told me he felt those were his last moments,” the relative said.

The third suspect, who had been left with Marios’ friend, suddenly appeared at the scene.

The three men sprayed him with pepper spray, hit him on the head several times and held a knife to his throat.

The attackers then stole his phone and wallet before driving away in his car.

“When he managed to stand back on his feet a few minutes later, he felt dizzy and everything was a blur.”

With torn trousers and blood on his hoodie, he staggered to the road where a young Turkish Cypriot man saw him and gave him a lift to the nearest police station.

Things went from bad to worse when Marios arrived at police headquarters in Larnaca.

According to Marios’ family, when the duty officer asked him the place of the incident and learned it was Pyla, they immediately referred him to Oroklini’s police station to report the crime.

Despite the fact Marios was obviously beaten up and in shock, the officer reportedly told him: “We are not taxi drivers” and asked him to take a cab.

When Marios attempted to splash some water in his face to wash off the pepper spray, the officer said: “not inside, you will make a mess”.

Oroklini police station was less than a ten-minute drive further down the road, but the officer said they did not have any police cars to take him.

Larnaca police spokesperson Charalambos Zachariou told the Sunday Mail they would investigate the claim and refused to comment any further.

Deciding he should seek medical aid first, Marios had to call a friend to take him to Larnaca hospital. There, he was examined, given first aid and released.

Marios then decided to go to Oroklini police station to give a statement.

“They [Greek Cypriot officers] couldn’t do anything; we knew the car was at the other side,” the relative said.

But while Marios was still in the hospital and just an hour after the attack, wheels were in motion in the north.

In circumstances still unclear, the collaboration was so successful that the president of Mitsubishi Evo Club, officially registered in Cyprus, was able to text Marios’ friend pictures of one of the suspects.

In her post on the private Facebook group of Evo Club, the president said she had identified the suspect, who lives in the north and had already sent his picture to Turkish Cypriot authorities and friends at 8pm on Tuesday.

In less than 24 hours and while Marios was still giving his statements to the police, a Turkish Cypriot man entered the police station and showed him on his phone a live video of his car.

“Without the help from sports car friends in the Turkish Cypriot areas, the car would NOT have been able to be found,” the president of Evo Club Cyprus said on social media.

All three suspects were arrested after Marios identified them, and he is still in contact with Pyla’s community leader for any updates.

The car was returned to its legitimate owner on Wednesday afternoon with the exterior appearing undamaged though unfortunately Marios has not been able to drive his darling car as the keys have not yet been retrieved.

“After this, the car will stay with me until the day I die and if I have children, they will inherit it!” the relative said Marios told him.